In our most recent interview, we catch up with Joe Duplantier, lead singer and guitarist of French metal band Gojira, just as they conclude their UK tour following the release of fifth studio album ‘L’Enfant Sauvage’. 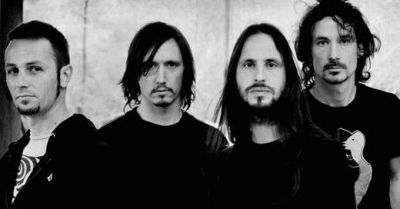 “This is my life. I don’t know how to do anything else.”

Gojira are obviously a very experienced and truly explosive metal band (why else would we love ’em so much…), having formed in 1996. Their success has resulted in international headline slots at festivals and on sell-out tours. Having recently-ish (February ’12) signed with major alternative record label Roadrunner, we at Soundspheremag are not the first and probably not the last to tell you that their most recent record ‘L’Enfant…’ is a heavy metal masterpiece, and if you missed their UK tour dates this time, fear not, as Joe has hinted that Gojira will be re-visiting the UK in 2013, “We want to come back to the UK for sure because the fans are extraordinary.” He’s a sweetheart, isn’t he?

Aside from being a proper gent, Joe is also proper musician, you know? He doesn’t care too much about his image, and talks to us with a sense of humour about his passion for touring and writing music, as well as his love for his family, and what inspires his lyric-writing.

But first, we wanted to chat about the last record, and some of our favourite tracks from it. ‘The Axe’ for many, is one of the most memorable tracks, and multi-instrumentalist explains that it was born out of pure musical expression: “The first thing we came up with for that was the riffs for the verse and the chorus – we would imagine a giant axe swinging and cutting heads off, and this is the name we made for the riff,” he adds, “it kind of influenced me when I was writing the lyrics as I was stuck with this axe image”. Joe continues to describe how this light-hearted humorous view on writing can often lead to great ideas, “I believe that through jokes and random ideas can come something important.”

Joe continues on to describes one of his most fond memories when writing another of our favourite tracks, the title offering ‘L’Enfant Sauvage’, “I did that whole song in almost one take, I didn’t have any lyrics or melody or anything but it just seemed to come through me like this ‘boom!’ It was almost transient!” He continues, “The lyrics are so simple, I just expressed something childish and angry – I want to run away from this society and not become a zombie. and that’s what the song is about.”

Talking to us about life since the record, and how he feels it is important not to reflect on its success too much, “I never look back. It [looking back] is a difficult thing for me to do, but I would say we’re giving it our best all the time and we see that things are growing.” When Joe says “when you’re a heavy metal fan, you want to be blown away with the power of a song, and I think we’ve done that with each song from the last record”, you know that this album is a must hear (if you haven’t heard it yet…why not?), and here at Soundspheremag HQ, we believe the whole record is a beast in its entirety.

So, it’s very clear that Gojira are a very busy band, and over the next year are playing tour dates in locations all over the world, “I love what I do so it’s always a pleasure to be on stage and to promote my band and to conquer new audiences,” He comments, “this is my life, I’ve been doing it since I was fucking 18-years-old, I don’t know anything else!”

Although Joe loves his tours, he describes one of its only drawbacks, and gives us a little insight into his softer side (which we are cool with…), “I just miss my family, to be honest, sometimes I would like to be home in my own bed, and of course to be with my wife.” He adds, with a chuckle, “I’m a big romantic. I’m very much in love with my wife and I would love to be with her and my baby.”

Family is something that inspires Joe (and ourselves) very much when it comes to his band and song-writing, but we wanted to know what else really keeps him motivated, “I like to travel. I know that sounds crazy with all the touring but travelling as a tourist is completely different, you can go wherever you want to go and follow your intuitions – when we’re touring I barely get time to visit the street around the corner from the venue.”

Inspirations aside, we ask Joe what he feels are the reasons for his success so far, and he says – as calm and honest as ever – that he feels the biggest reason for Gojira doing well is patience. “It isn’t the only thing, but it’s probably the most important – if you’re not patient then you’re going to lose your mind in this industry. If you’re not patient it might cause tension in the band – you might just want to give up!” Joe, talking about the success of his music, adds “I don’t try really hard to make anything complicated; to make things sound cool. I have things to express and I enjoy expressing them.”

While over the coming months, Gojira will be planning to take a break from songwriting, they are certainly not taking a break from touring. With a huge amount of gigs already planned for 2013 happening all over the world, “We’re going to Japan, South America, and India which will start in December, so we’re going to travel a lot, and we’ll come back to the UK at some point as well.”

Here at Soundspheremag, we hope some UK tour dates will be released sooner rather than later. When you listen to Gojira, it really comes across that they believe in their music. After an enthralling chat, we wish the best of luck to Gojira, and wish Joe a Merry Christmas (what? It’s nearly December…), to which he cheerfully responds: “I’m not a religious person, but when it comes to Christmas I still find I think of Jesus and think, ‘happy birthday, dude!’” Brutal music from a lovely bloke, then. Gojira ladies and gents, they’re ****ing awesome.