This is Norwegian multi-instrumentalist Jarle Bernhoft (formerly of rock group Span). Pay attention. His mix of acoustic instrumentation, beatboxing and loops produces something very soothing and catchy. We share a light-hearted chat with Bernhoft ahead of his upcoming London and Brighton dates about all the cool stuff – music, Star Wars and the rock ‘n’ roll dream. 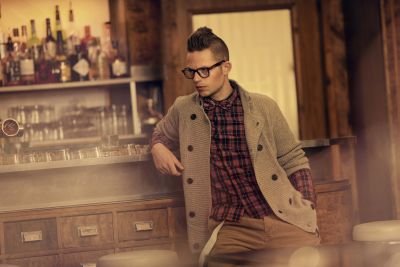 S] How are you looking forward to your London and Brighton shows?

B] “I’m very excited! It’s been a while, and hopefully I’ve upped my game since last time, so I’ll aim to lift ceilings just an inch. Outdoor gigs are just an extra challenge.”

S] Do you have plans to tour more extensively in the future – coming up North perhaps?

B] “I think I have more an idea of touring Britain than a real plan. I’ve been on that circuit a few times in the past, and I know it’s hard work. So, being a lazy twat, I need a bit of leverage in terms of a release and airplay to back me before I go. But I’d love to see some of the old places again.”

S] A lot of UK fans will remember Span as well – how do you look back on your time with the band at this point in your life?

B] “That was school, this is life. No seriously, those were gloriously debauched days, there’s something about riding with the musketeers that modern life just can’t compete with. Still I feel very confident that the choices made were the right ones.”

S] Do you still draw from the same types of inspirations when you write as when you were in your other band projects?

B] “Lyrically yes, musically both yes and no, mostly no. I’m much more focused on rhythm patterns now than the chord-nerdy stuff I was into before.”

S] How do you find touring around the world as Bernhoft in contrast to being with a band – do you miss that “vibe”?

B] “Every once in a while I might, but at the same time I have a very good crew with me, one of them Span’s old tour manager, so the vibe is still recognisable. And sometimes, when fees are exuberant, I take my 12-piece band with me.”

S] Has your approach to performance changed at all since working on solo stuff in 2008 – you’ve performed in front of some sizeable audiences around the world – is it more nerve-racking being out there on your own?

B] “I’m a bit of an oddball there, when it comes to performing the nerves are inversely proportional to the size of the audience; no nerves in arenas and plenty in living room gigs. But I had a great experience the first time I properly messed up my layering of sound. It just swung terribly and all was going tits up, so I stopped and asked the people there if I could start over. And the distance between me and the audience – already quite small, solo performing works a proximity-booster – just vanished completely. Deeply enjoyable, but the downside is that the relaxed attitude towards cock-ups serves as said cock-up’s nemesis. It rarely happens anymore.”

S] Are you working on new stuff at the moment, and how will it progress from the ideas on ‘Solidarity Breaks’?

B] “I’m almost useless at writing while touring, and I have been touring non-stop for a year so there’s not much material flying around. But inspiration gets to me all the time, so it’s more a case of sitting down and try to churn out music from all the accumulated impressions. Direction-wise I’m debating whether to go backwards or forwards temporally, either more wood or more binary code.”

S] Even after all of your years in the music industry – do you still find that you are learning new things about yourself as an artist, and personally as well?

B] “Definitely, I’m constantly checking whether I’m true to the first move, for my taking anything up front again after Span. I revisited this profound need to communicate with people through music, and if the focus shifts from that particular point, I’ll spend considerable energy forcing it back. Partly the reason for quitting Span and starting to study or do backing for other artists, was that that focus had gradually slipped from sight without me noticing, so a constant monitoring of an ever-changing self is pretty important.”

B] “They’re the two most ‘one-on-one songs’ of the lot on the album. I do think that solidarity reaches into the personal relationships though, I’m trying to talk about the effects of communication breakdowns and extreme lack of empathy that occur in relationships, especially as they near the end. A break-up is like a tiny kung-fu champion with Sith competence, it’s a bastard turning your weight against you. So I’m trying to Jedi the whole scenario through singing. I wrote them in a darker place than where I am now, but I still need to beware I guess.”

S] Jarle, in the event of a zombie outbreak – what weapon would you use to defend yourself, and why?

B] “I’ll burn my toothbrush and stay out of the shower to be a weapon in my own right. They’ll still have the sense of smell.”