Retired-ish professional wrestler Mick Foley is on tour. Only this time, he’s fighting to win over the hearts of UK audiences as a stand-up-ish comic. Our editor, Dom Smith, has a phone interview with the man who he has labelled as one of his greatest inspirations, to discuss his work for Charity RAINN (run by Tori Amos), his visiting smaller venue cities such as York and the fact that big boobs just might lead to world peace… 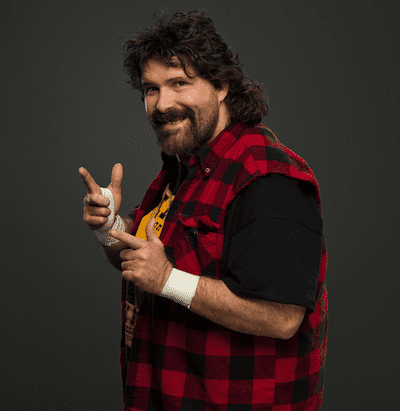 “I still need to do something creative”

Mick Foley, also known as Cactus Jack or Dude Love is on a comedy tour of the UK. On this visit, he’ll be hitting smaller venues such as York and Bath. Two dates in, it’s going very well.

This isn’t Santa Claus’ (another WWE-related pseudonym) debut run as a comic. At the Montreal Comedy festival he was with hundreds of comedians under one roof in one hotel. At the Edinburgh Fringe, there were thousands. “All these acts just trying to get some kind of name and face recognition; I’ve got what they’re looking for! But I was chasing away my own fan base…”

He tells of his routine and that the show always contained a bit of wrestling material. He has worked on making the show as accessible as possible. “The fans do enjoy themselves, they go out of their way to tell me they do. It’s such a crazy, surreal world. The stories are fun, I try to create an atmosphere that’s welcoming and comfortable for everyone.”

As a wrestler, Foley has visited many of Yorkshire’s bigger cities such as Sheffield. We asks how the prospect of playing the smaller venues, such as York, sits with him. “I’ve been to UK dozens of times but never hit York. As I’m taking a larger role in WWE this year, I probably won’t have any extensive comedy tours of my own.” Mick explains that this may be the one and only time to catch him on stage in York. Cue disappointment! “I hear York has a lot of history and friends have told me I should definitely check it out. And if there’s anyone in doubt; I would not come to your city to not be good.” What a promise.

Apparently, the statistics are like this: 95 per cent of people (at the shows) know Mick Foley as a wrestler. The other five per cent are along for the ride. Mick reveals that even some of his best friends haven’t seen him wrestle, and they don’t even like the sport. “They like me, and they like the stories. The cookie story with DDP and Steve Austin [from his autobiography]; you don’t need any wrestling knowledge to understand how it would be awkward for a fully-grown male to lie naked in bed surrounded by several chocolate chip cookies!”

In terms of topics that might be discussed in the tour, we ask if the star finds it easy to bring current affairs into his routine. This is where Foley mentions bringing about world peace through big breasts, a motion with which we wholeheartedly agree, by the way. Foley says that he will probably incorporate this type of older stuff from when he first started into his routine for the York gig, since the people in this area have most likely not seen it.

What about techniques then? As a published author of children’s books and numerous autobiographical works, do any of the techniques bleed into the comic routines? Mick laughs: “Not to the extent of the children’s stories. Well similarities between writing and wrestling are pretty simple; you create a character that people care about and put him in a precarious situation and then you write them out of it. So you can do the same thing be it children’s, novel or wrestling match.”

Continuing on to examine techniques and challenges as Mick takes on the comedy world, we ask what advice he would give to people starting out in stand-up? “I don’t believe there’s a textbook anymore than there is for pro-wrestling. The most important is to get out there and do it. Learn more from failures, sometimes I would think, ‘Why am I subjecting myself to this?’ It can be a really emotionally difficult experience. Having shows that don’t go well, you appreciate more those that do go well.”

Obviously, working as a professional wrestler in front of thousands is very different to working a room of a few hundred for comedy, but we ask Mick to give his thoughts on the transition.“Yeah, it’s just you and a microphone. The audience will be courteous for a few minutes, but after that you better be good!”

As one of the busiest men in sports entertainment, we ask Mick to take us through a day in his life. “It’s hectic, is the answer the larger-than-life performer replies,“I’m busier than any of the wrestlers.” With his various commitments, including the charity work, it seems there simply aren’t enough hours in the day.“Typically, I get up, drive to the next town, added responsibility of post show meet and greets,” As opposed to letting around 1,000 people in to them before, these events have now been capped at 350 people per meet & greet. He divulges that he will also try to see some of the country this time around. “When I first came to UK in 1993 I took the rail system, got off at all the points I’d heard of in songs and stuff. But there’s been no time recently. So this time I definitely hope to see some more.”

Foley confesses that once he finished wrestling, there was a big creative hole that needed a fill. This was filled through writing, and through doing these talks at colleges. “I still need to do something creative.” That creativity has taken many forms. Indeed, alongside his new obligations for WWE, his own tours and new writing, Mick is also a prolific do-gooder; he has been involved in several Make A Wish Foundation events and sponsors seven children through ChildFund International. But since meeting with Tori Amos in 1993, and the founding of her charity RAINN (Rape, Abuse & Incest National Network) he has been active within it. We wonder how his charity duties have developed over time? “I wish I could say I do as much as I used to, but it’s not true. I started off for two years as an online volunteer doing so much, I didn’t watch TV for about a year! Every free moment, I was online, helping. It can get to be pretty draining and I realised at a certain point that I had to work, I couldn’t spend all my time helping. My role now is to create awareness, raise money as I did with my Wrestlemania raffle and as I intend to do with my SummerSlam raffle. $60,000 was raised last year, and I’m shooting for $100,000 this year.

“The guys who won the contest, couldn’t believe what they got! One wrote a great blog with the constant theme of ‘This can’t possibly get any better… but it does!’ The only problem was it looked too good to be true. They have a vacation of a lifetime. We want to extend it to four people this year, it’s you and three friends, not just two.” It is at this point in the interview that Mick reveals his intention to donate some raised money to a York-based charity that supports sexual abuse victims. We love you, Mick!

After a phone call on the other end briefly interrupts the chat, we get onto the subject of wrestling. Dean Ambrose, Shield and CM Punk are listed as some of Mick’s current favourites. Here, we take the time to reference a favourite moment our own wrestling history as Mick’s dramatic winning of the WWE Championship title from The Rock for the first time in 1999. That one really struck a chord with us for various inspirational reasons. Will this moment go down as one of Mick’s favourites?

“That was definitely, awesome moment.” There are hundreds of moments that must stand out within a wrestling ring. He occasionally has them sometimes in comedy too; when something comes to fruition and gets the reaction you thought it would in conception. “All of us are capable of more than we initially believe. So, I am glad I can inspire people.” Thanks Mick, you’re a proper legend. Have a nice day, and we’ll be seeing you soon!