We catch up with one of the most open and adaptable artists around in the UK today, Scroobius Pip, just before he kicks off his Spoken Word tour, which will hit The Duchess in York on December 3. 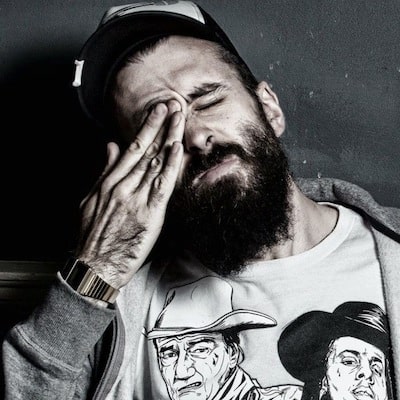 It’s very apparent by the chilled but excited tone in Scroobius’ voice that the near and distant future holds a lot for this unique and multi-talented artist. Scroobius does just about everything from singing, rapping, poetry, DJing, event management (WE.ARE.LIZARDS) and he even owns his own record label (Strange Famous Records). He has collaborated with some major names in the music industry, and has revealed to Soundspheremag some more-than-exciting news that he is planning to write some more new material with industry legends Danny Lohner and Travis Barker.

We could hardly have a chat with Scroobius Pip without talking about his amazing work with producer and artist Dan Le Sac. The duo have previously released two records together, both achieving commercial success, and we wondered what kind of styles influenced their electronic hip-hop sound. “What me and Dan do is a coming together of minds, I would never sit down and say, ‘Right Dan! I want the next album to be more punk or hardcore – we make what we make’.” The duo’s debut single and best-selling to-date is called ‘Thou Shalt Always Kill’, which contains a hypnotic up-beat backing track with some slightly humorous-but-honest-opinion rapping by Scroobius, and really is a must hear if you haven’t already.

You will be delighted to hear that Scroobius is planning to work more with Dan Le Sac, but first, we felt we needed to talk about Scroobius’ solo record ‘Distraction Pieces’ which was released last year, and featured lyrics by Kate Bush and a track produced by Zane Lowe. “I was really expecting it to be a side-project sort of thing [from Dan Le Sac] but it got in to the top 40,” Scroobius delightedly explains with modesty, “it was in the top seven or eight in the iTunes chart!” Here at Soundsphere we are happy to confirm that the record did in-fact hit number seven in the iTunes chart.

But why did Scroobius decide to do a solo project when his work with Dan Le Sac was so good? We hear you ponder. He says: “The point of doing ‘Distraction Pieces’ was that I grew up listening to punk and hardcore and stuff like that, and me and Dan have never really got that in to our work because those types of bands are not really his influences – I wanted to do something different.” The record really does give off a more punky-hardcore feel, but when you’re also collaborating with the likes of Danny Lohner (Nine Inch Nails) and Travis Barker (Blink-182) you can hardly be surprised.

This brings us nicely to the future of Scroobius Pip. He’s already told Soundspheremag of his hopes of writing more music with Danny and Travis, maybe even a full album! Wouldn’t that be a treat for all ears? We certainly think so! “They were both ‘insanely pleased’ with how intradiction went, as was I – and we’re keen to do some more stuff together. I think it will be a case of…particularly with those two guys, the hope would be to do a good few songs, if not a whole record!”

Scroobius also promises of a bright future with Dan Le Sac, “Once his tour’s over we’re going to start getting our teeth stuck in to it more.” As we know, Scroobius is a man of many genres and styles; don’t make the mistake of thinking his most recent punky-hardcore album is all there is to him. “As much as I was enjoying the band stuff for ‘Distraction Pieces’, I was missing the way me and Dan worked and the more dancey and ravey element of our shows – the stuff with the band was more mosh-pits and crowdsurfing.” We’d love to tell you to expect to hear some new tracks by the duo very soon, but unfortunately it’s all still in the works, “Dan’s sent a few beats over and we’ve gone back and forth on a few ideas but it’s ridiculously early days still sadly.”

2013 is looking promising for Scroobius and all of us fans. What Scroobius is most looking forward to right now is his Spoken Word tour. “The tour is something that I’m really excited about at the moment because – I’m fully in control of it; I’m tour manager, I’m booking agent and it’s just exciting to have that much control.” Scroobius describes his joy of a spoken word set he did to 4000 people at Latitude Festival earlier this year, and how that was a major inspiration, “The crowd just paid attention to everything and took it all in, and that just blew me away and inspired me to do this tour really.” Scroobius, needless to say, promises us all a fully engaging show, hoping to take spoken word gigs to mainstream venues, and adds “it’s not going to be just reading love poems out of a book as we all weep in to our whiskies”, he comments. “People are going to be coming to these shows having not heard spoken word before, and the first thing they’re going to hear before me, is PolarBear and Kate Tempest who are literally the best of the best.”

Scroobius pip is one of the most original, varied, and open-minded artists we’ve had the pleasure of speaking to, and his next tour, which we promise will be unique, will be hitting The Duchess in York on December 3.