We caught up with two members of West Yorkshire post-punk band The Chevin – Coyle Girelli (vocals/guitarist) and Jon Steel (bass). At the time of our chat, they are sat in John Lennon’s old apartment in London, and will be performing in the man’s gaff a little later on. They later admit they are “working now on stuff that I guess will be on the next record” which got all of us here at Soundsphere very excited! 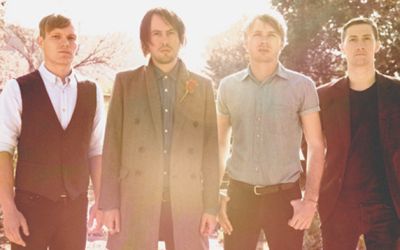 The first thing we just had to ask was about their new release, ‘Borderland’. “That song was born from about 40 songs which we had put together,” explains Coyle. From this they slowly but surely narrowed down the long list of songs until they were left with about 16 which they went and recorded out in the desert (studio) in Texas.

The pair later discuss how the themes of ‘Borderland’ reflected their own lives throughout the year of making the album in 2011, including “a lot of bullsh** going on personally”. The band agree with our statement that the songs on the record are sad but uplifting in tone. “It’s an uplifting, hopeful album that captured the moments we were living in at the time, it was a live and raw record,” adds Jon.

Let’s not beat around the bush here, ‘Champion’ is astounding. When the track released as a single, it got a lot of attention. We found it motivating, for sure. When asked about the inspiration that led to its creation, Coyle says: “’Champion’ actually came out of a jam, we were in our rehearsal room, trying to figure out how to merge two songs together which we were playing live at the time.” He explained that “the instrumental part [from that song] came together before they rest of the song and then we put the rest of the song together around that.” Coyle even refers to ‘Champion’ as “a personal sort-of pick-me-up.”

Our other favourites from the album are ‘Dirty Little Secret’ and ‘Drive’. Coyle explains: “Those tracks were actually the ones that transformed the most from their early versions to the ones that ended up on the record.” Indeed, these specific tracks touched everyone at Soundsphere, not just because of the great sound but also because of how easy the songs are to identify with. Coyle reflects on the themes and talks about the heartbreak and challenges that were there for him when writing the who record, and in-particular those aforementioned songs. “If anyone listens to those, they will be able to understand the state of mind I was in at the time of writing them.”

Another burning thing we wanting to quiz the band about was their recent-ish appearance on Letterman in the States. If you haven’t heard already; during The Chevin’s recent time in America they performed on The Late Show where they guested alongside the First Lady, Michelle Obama. Coyle said: “We were all nervous that we would get the normal cold-shoulder.” What he’s referring to of course, is the fact David Letterman is often known for his mockery and his cynical sense of humour. However Letterman turned out to be a big fan, he was even quoted saying: “Hell, if I had that guy’s voice, I’d run for president. Holy cr**.” Jon adds: “It was a very good experience; it was obviously because it was the first time we’ve been on national television, so to do something that’s such a famous show was just amazing for us!” It was surely a surreal and amazing experience, and we think it’s certainly well-deserved.”

The Chevin are a local-ish band to us, originally formed in Otley, and are now based around Leeds. Their name came from a ridge on the south side of Wharfedale in Leeds that overlooks there home town. Coyle comments on just how much Leeds and the surrounding areas have influenced the band. “Growing up in an area like that you are inspired by the scenery, you only have to walk for five or ten minutes or drive for a couple of minutes and you’re out into the [Yorkshire] Dales and that so it’s a great place to grow up and to live it gets in your blood when you grow up in a place like that.”

The Chevin also talked about Leeds music scene and being inspired by other successful acts from the area like The Pigeon Detectives. Coyle comments, “I think Leeds has always had a great music scene, due to having so many venues, so many shows and being able to see so much music – Yorkshire is such an inspirational place for a band. I personally write almost every day, which is like an on-going process, writing is pretty much a constant thing, so there are always a lot of songs, a lot of ideas going on.”

The Chevin will be heading back to America before the end of 2012, but have plans to work through a UK tour in 2013.