Last week, on the last day of their current tour at a stop in London, we had a natter with Corey Beaulieu of Trivium about his love for UK shows, the impact of ‘In Waves’ and plans for 2013. 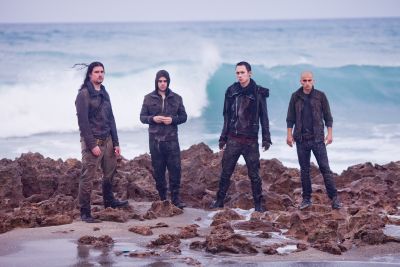 “There will be lots of new tricks on our next album”

We’re only a few minutes into our chat, and we’re immediately enthused as Corey excitedly relays his feelings as his band close off the tour. “It has been absolutely great. It’s always a lot of fun touring here; we are coming back sometime next year with another record, so we are looking forward to that.” Corey reflects on their experiences performing this year with their new heavier material. He says: “’In Waves’ has been the biggest touring cycle we’ve had, it’s by far our biggest album and as a result, it’s helped us grow our fanbase.”

Of course, we (at Soundspheremag HQ) are pleased to hear that the tour has been such a success and that everyone enjoyed their thundering lows, soaring melodies and mind-blowing solos just as much as us!

Moving forward, we discuss Trivium have toured with many UK bands (including York’s Asking Alexandria). They played early last year with Rise To Remain, and Corey is excited about that band’s progress, and has fond memories of hitting the road with them: “We’ve been really good friends with those guys since we first toured together,” he says. “We are actually the first band who brought Rise To Remain out [on tour], before they even had an EP or anything, so we go way back!.”

Reflecting further on the success of the band’s last album, ‘In Waves’, Corey comments on how the unit found a heavier and more aggressive sound since its creation that has left them feeling incredibly motivated to push on and keep creating. “We had a lot of fun making that record, we spent the time making sure everything was exactly how we envisioned it being, and nothing was left unfinished,” he adds, “we’re really happy with every aspect of the record and the songs have been great to play live; they were written for that reason, whenever we perform stuff from ‘In Waves’; the audience, you can tell they are really into it – a lot of new people took to the record, and that’s really exciting for us.”

On writing new material together as we approach 2013, Corey says: “Now, we know our style more as a band and also individually, as individual players, we all know what we bring to the table; we never want to get complacent and we’re always developing. On every record, I want to sound better.

“Each album we put out there you can hear new things we’ve incorporated, that we didn’t do on the previous one, there will be new tricks  from all of us on the new album we release next year too, that’s for sure.”

It’s true that Trivium’s style has evolved massively over the years (from their earliest work on ‘Ember To Inferno’ all the way through to ‘Shogun’). Each album has seen great growth for Trivium, so we wanted to discuss the new material they are working on in more depth, and get a sense of how the band think it’s going to turn out. Corey gives us high expectations, saying: “All the songs are coming out really well, they’ve got that core Metallica influence,” he enthuses, “we’ve experimented with where we could take things, and we have found what we want to do, the new record should be a lot more cohesive and we’re very inspired to write at the moment; it’s very metal stuff, heavy but with melodic elements in there as well, it’s very ‘pumped up’ material so far!”

When referencing his own writing techniques, Corey seems relaxed, of course it comes as second nature to him these days: “Once I have an idea, I can write a song in half-an-hour. I’ll just put on a track and jam to it until I come up with something; it really is that simple.” That being said, Corey reveals that he can be inconsistent when it comes to writing stuff: “I have [songwriting] spurts; we once had a break when we were on tour before releasing ‘In Waves’, and I wrote eight songs in around two weeks!”

On the subject of tunes, old and new, to finish on a high note, we ask if Corey feels a special connection to any of the songs from Trivium’s extensive and anthemic back-catalogue. He reflects proudly, “I think that ‘Like Light To The Flies’ really means a lot to me, and to the whole band as well; that was the first song that I contributed to Trivium as a writer, and that was the song that got us signed [to Roadrunner] as well,” he says, “that will always be a very big hit for us, and it means a lot.”

Trivium will head back into the studio to record in January of 2013.