Soundsphere were lucky enough to catch Young Guns’ Gustav Wood (vocals) and John Taylor (guitar) for a quick chat just before they stormed the Festival Republic Stage at Leeds Festival on Sunday. Here’s what they had to tell us… 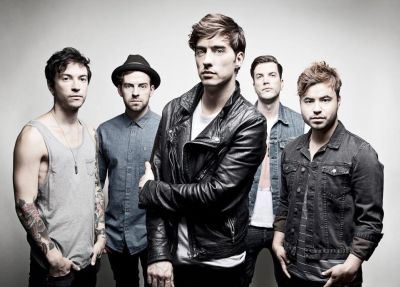 A night-time tent, everyone singing along- that’s what it’s all about!” – Gustav Wood

S] Welcome to Leeds! How does it feel to be back?

John Taylor] “Yeah really nice! Really nice to be back. It’s only our second time ever here, like when we were kids we used to go to Reading all the time, but it’s really really nice to be up North and to be playing to a different crowd so we’re really excited.”

S] How do you enjoy playing venues up North in contrast to venues closer to home?

GW] “It’s fantastic, yeah. We’ve always found that crowds in the North are really up for a good time and they’re really kind of spirited so it’s always one of the highlights of the tour really. I mean playing in London’s always obviously a really big deal for us but it’s nice to get out to different parts of the country. And one of the things about playing in a band that’s slightly different is that it’s really nice to see a lot of the country that we’re all born and raised in. Y’know, you don’t always get a chance to do that, so it’s lovely to see parts of the North that I would never see otherwise.”

S] You’ve been known to champion Brit-rock bands like Enter Shikari and Twin Atlantic before, did you get to see them this weekend, and catch-up?

JT] “We saw a bit of Enter Shikari yesterday [at Reading] and they were great as usual. Annoyingly we’ve missed Twin Atlantic twice because we were doing some press, but yeah, we’re going to try and catch Enter Shikari again today. They’re really great dudes, they took us out on tour and they blew us away every night and I’m sure they’ll do the same tonight.”

GW] “They’re a great main stage band aren’t they ‘cause they just smash every crowd. A brilliant festival act.”

S] With the commercial success of ‘Bones’, are you looking forward to recording again?

JT] “I will be when we write some stuff! [laughs] We don’t have a lot of free time at the moment ‘cause we’re touring so much and we are just about to head to America and start a campaign out there. But yeah, we’re really looking forward to getting back to the writing and getting back in there and putting down a third album. As long as we can prolong what we’re doing now, it will be a great thing.”

S] How do you look back on the songs that made up ‘All Our Kings Are Dead’ now at this point in your careers?

GW] “Well we owe it a lot, y’know? With the first record we wrote it very quickly and it was all a real rush and it worked out really well and we’re really grateful for that. I think most people in bands will always look back on their first record as being very much an unfinished product in some respects. I’m proud of it, it did a lot for us, but we’re a better band than that now I think it’s fair to say. And I think that should always be true really with each record, you should always try and look back and go ‘Well I liked it at the time, but now I know I can do better’ and I think that’s important.”

S] In an interview you voiced your excitement at playing the Festival Republic Stage tonight – what does it mean to the band to have that recognition for the work that you’ve done?

JT] “We were just saying earlier how great and an absolute privilege it was to play on the main stage [Young Guns were the opening act on the Main Stage in 2010), but now that we’re a couple of years later down the line, we’ve put a couple of albums out, our slot now feels a bit more warranted. We feel like we belong where we are on the slot and being able to play in the tent with such a great atmosphere, it just feels more real to me.”

GW] “Yeah it does. I think each year the first band on the main stage is given to an up and coming band, and that’s really a great thing to be picked to do that. But when you’re in a tent that’s for me kind of the definitive experience as a gig-goer and so to be on the other side and to have it go as well as it did yesterday, it almost makes it an even bigger deal. A night-time tent, everyone singing along- that’s what it’s all about!”

S] What kind of ideas are inspiring you at the moment?

GW] “Well we’re trying to write but the American record deal stuff has just come through which meant that we’re kind of having to promote from the beginning again the second record as if we were a fresh new band, but also trying to think about writing a new record. Our music tastes are probably getting more and more diverse as we get older and as we grow, and so hopefully we can keep the new album sounding fresh and new and exciting. We‘re a band that always wants to evolve and push and be a better band. That’s the general aim. We don’t have any goal other than to just be better than we were.”

S] You’ll be playing in the States in September for the ‘Bones’ album at the Apple Store in New York. How are you feeling about taking Young Guns Stateside?

S] And finally, if you could rip out the soundtrack to any film and replace it with the music of Young Guns which one would you pick, and why?

GW] “I would say ‘Jurassic Park‘ except that for me that score is holy, so probably not.”

JT] “You know the last soundtrack that I heard that was amazing was the ‘Drive’ soundtrack, but I don’t think we could replace any of those songs.”

GW] “No, but you know what would be really nice if we could try our hand at writing something a little different for it.”