With a new Goldblade record coming out next year, and the (other) great music news website Louder Than War doing so well, Soundsphere decided that we should check on how the Mancunian punk legend and cult music journalist ‘n’ author John Robb has been working on new material for The Membranes, and at the same time, see if we could get any advice on how to achieve the things you want in life without compromise. 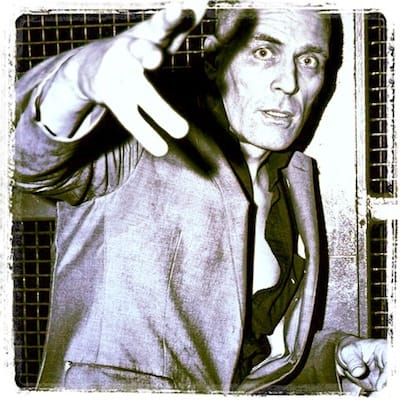 “You should just make music to entertain yourself”

Firstly, we ask about a typical day in John’s life, and (fortunately) he has a lot to say in reply: “There’s a lot of things, really; it’s all simple stuff; I get up in the morning, answer all my e-mails, check the [LTW] site’s alright, pop a few blogs up there and write a few news pieces. I am working on a book at the moment, so I am doing a lot of that side of journalism. I also check up on bands that I am working with who have releases out on my Louder Than War record label [including York’s own Fawn Spots], arranging gigs for Goldblade (John informs us that the band will be touring in March 2013 when the new album ‘The Terror Of Modern Life’ comes out), sending stuff out regarding the new record, sorting the artwork out and more. I am always sorting things out!”

Just as we expected, Goldblade‘s vocalist is very busy, all of the time, and naturally we’re very curious as to how he keeps himself motivated. He replies, eagerly: “I get out a lot, I go see a lot of gigs, and perform as well, I’m not just sat here 24 hours a day, it’s very varied!”

Next, John goes on to discuss (in brief) the music that he has been working on most recently with The Membranes. “I’m still inspired by the same things that I have always been, ever since I started out in music; I always make sure that there’s lots of noise,” he laughs. “We’re working on a new Membranes track at the moment and that’s quite interesting for me because it’s mixing a lot of new influences and ideas, but at the same time, keeping the raw energy and sound that we’ve always had.”

As an expert in all manner of alternative sounds, we ask John what he thinks of the modern brand of alt music: “It makes me laugh that alternative music has become something that’s not very alternative, really…people’s ideas of what alternative is nowadays comes through bands like Scouting For Girls and Busted. It has become a style of music that is just another way of making money, and very little more.”

When discussing his own (hugely popular) music news site, Louderthanwar.com and the impact that it’s had around the world, Robb explains that for him, having that outlet is about doing things his own way, and supporting others interested in journalism and writing while he’s at it. “I wrote for some really good international websites and publications, but I started my own to cover all the things I wanted to write about. All the people that contribute to the site understand what we are trying to do.”

Robb proudly funds Louder Than War’s record label out of his own pocket as well, which is just lovely of him, we think. The label was born out of his own desire to motivate and inspire young musicians, he says: “I just want the bands to do well, I want people to hear about them; I’m just like a fan saying: ‘check this out, this is brilliant!’”

At Soundspheremag, we know there are many budding journalists out there and would else would it be better to get advice from than someone like John Robb himself? He says: “You must always be thinking about the way you write; always try to keep an edge and always trying to write with your instincts. The style I write with is very instinctive, for example.”

Following on, we ask John what the best advice he himself ever received has been, and his answer is simply, “You really have to follow your instincts. It’s such an important thing, the idea of doing this kind of stuff [writing] for a career is pretty ridiculous, because there no definite path, you don’t know where it going to go, so you should go with what you like, what you feel,” he adds with a laugh, “I don’t know it that’s perfect advice for buying a new house though!”

While some people look up to the rocker for his journalism, many also look up to him for his music and rich history with the aforementioned punk bands. Those hoping to break into the punk scene (according to John Robb) should “not obey any rules”. He adds: “There’s too many people who say ‘that’s not music…’ or, ‘that’s not real punk…’ it’s nothing to do with everyone else, you should just make music to entertain yourself really! There are a lot of good punk bands around now, and there’s no one style of punk, and it’s important for people to remember that!”

John Robb has been a strong figure on the worldwide music scene for such a long time, as a reporter and performer; we reckon he must have seen some great things, and he’s certainly met some awesome people. But we want to know, what he finds exciting and defining in his work now? It seems it’s the smaller things in life that still have the biggest impact. “For me, the thing that always stays with me is playing live, and certain shows; just coming up with something that musically I think ‘wow that really works’ or hearing a great new tune someone sends in [to Louderthanwar], it’s more the little things really than one big thing. I mean big things happen to me all the time, thankfully, but the little things are much more thrilling!”

So, what’s next for Mr Robb, then? As we approach 2013, aside from keeping his website updated daily, John’s got the release of the new Goldblade record (we’re excited…of course), playing gigs with that band, demoing new material for The Membranes all while trying to finish a book off and get it out for Christmas! Oh yeah, and he’s also finishing off notes on another book he’s been working on. Bloody hell!

With all of his success and honours like Indie Champion (via the 2011 AIM Awards) being thrown at him regularly, at the conclusion of our informative chat, we ask JR to reflect on his success, and without tOo much thought, he comments: “It’s just nice when people pat you on the back and appreciate you!” Such modesty, from a real British music legend. Nice!