By Editor May 31, 2020 Features, Interviews, Spotlight
No Comments

Heavy is the head that wears the crown. Heavier still, when it carries the honour of making history. Wrestling is a sport weighted equally in theatrics as it is physical might. With twists and turns, steeped in themes of revenge and choreographed to draw-dropping precision, the worlds of WWE and Shakespeare don’t seem to far away from each other. 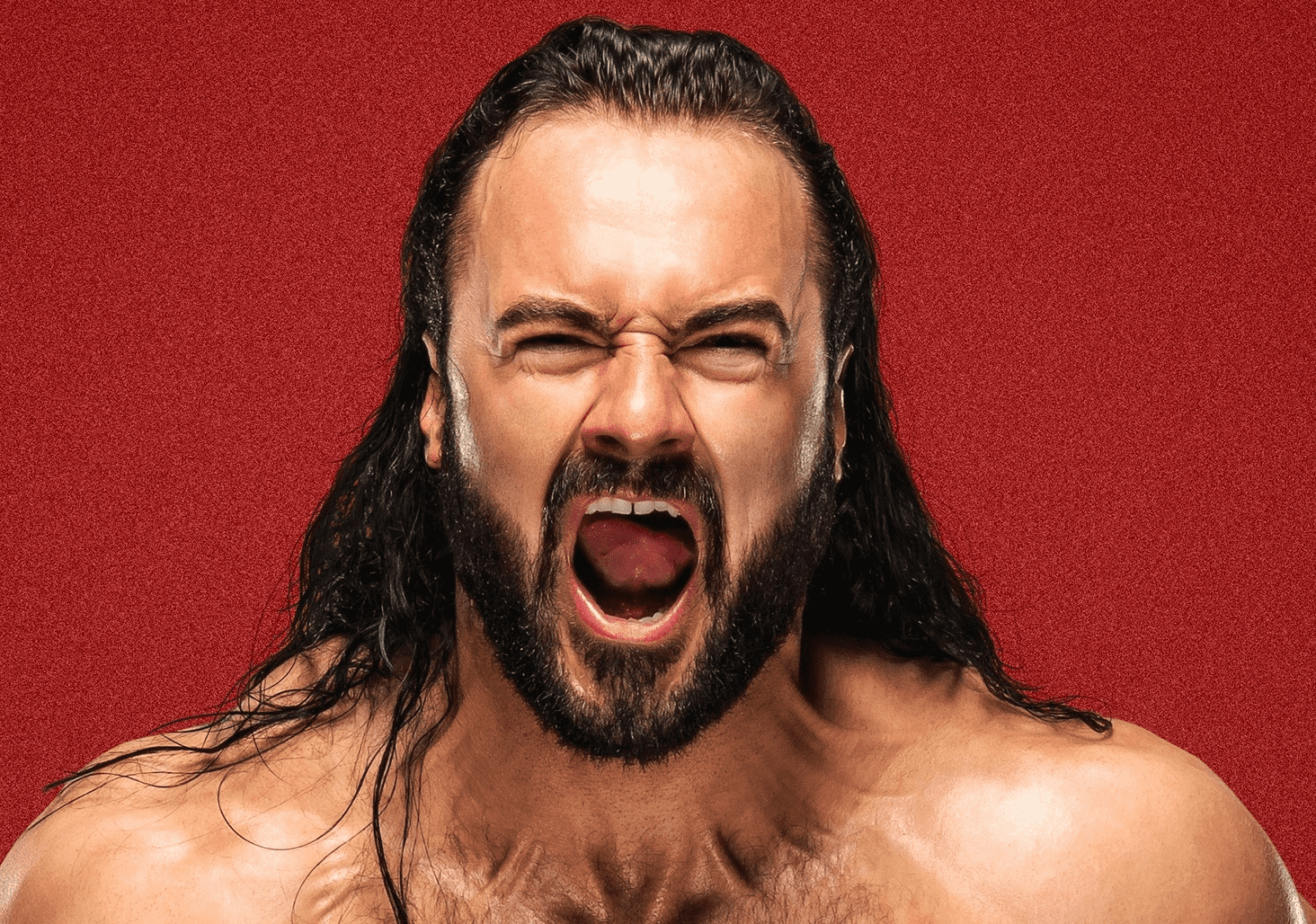 In WWE’s Royal Rumble, each fighter’s storyline converges into the ultimate showdown: a 30-man brawl, the winner being the last man standing. 2020 was a year of firsts for Drew McIntyre, and he kicked it off by being the first Briton to take the title. If that wasn’t enough, the reigning WWE champion took down American wrestling icon Brock Lesnar in WrestleMania 36, again, being the first Brit to do so – and one of the first fighters ever to take on the challenge in an entirely empty arena, with his audience self-isolating in their millions at home.

You only have to look at this towering, 6 ft 5, 265-pound Scottish megalith to know that he is that the top of his game. “The night after I won the WWE championship,” McIntyre recalls, “the headlines across the whole of the UK was the queen making a speech, and then Drew McIntyre winning the WWE championship. I believe I was head of her for a lot of the time for news back home.”

While this level of notoriety that almost borders of treasonous may come as a shock to those who don’t watch wrestling, the fact is, you’re looking to be one of the few who don’t. WWE streams to more than 800 million households worldwide each year, in 180 countries, in no less than 28 different languages. The organisation itself, as well as its various WWE-stamped offshoots, have amassed upwards of one billion followers on social media – “that’s billion, with a ‘b’”, McIntyre emphasises.

“I’m just a big wrestling fan who pursued it and got this far. I’m still a wrestling fan at heart,” he admits. “But I’ve got to put on my professional hat at the same time and say this is what I’ve been working for my whole life. I wanted to be the WWE champion, I’m doing it, and I get to be myself and tell my real story.” Though it’s true that McIntyre’s meteoric rise to success was written in the stars, the path to get there was not a smooth one.

At 23, after clawing his way with white-knuckled determination from the almost non-existent British wrestling scene, the WWE kingpin Vince McMahon declared him the “Chosen One” – a future champion in the making. Yet for the next 6 years, McIntyre’s momentum all but fizzled out. Seemingly through no fault of his own, the dots didn’t seem to connect between physical prowess and the essential in-ring personality that would win over his audience. A big fish in a big pond, surrounded by even more enormous, meatier fish meant that McIntyre seemed to pass by unnoticed. At 29, he was dropped from WWE.

“I couldn’t be who I am today without my time away; I wouldn’t have learned what I’ve learned without it”, he says. “I look back on that time and I thought, ‘Man, I wish someone had taken me and given me a shake and a real wake-up call during that period’. The fact that I was just sitting there, woe-is-me, rather than working as hard as I could to get better… I can’t change it,” he accepts, “and I am who I am because of it. Things have changed. With this downtime, I hope people are having an honest look in the mirror because that’s the person you’re accountable to. If you can look in the mirror and say, “I’m giving it my all, I know I am. Things aren’t working out, there’s not much I can do about it, but I know in my heart I’m giving it my all”, then that’s fine. If you can’t do that, then that’s on you.”

Belonging to a sport whose audience is not only crucial for morale, but actually have the power to shape the narrative of their favourite fighters, McIntyre accepts through lockdown, many wrestlers will be faced with the same uncertainty about their futures as he once was. “I’ve been speaking to a few of them about this,” he says, ‘Anyone who I haven’t spoken to, reach out to me, please. But this is an opportunity to reinvent yourself. If you had a vision of yourself that you weren’t able to bring to the table with WWE, with everything constantly moving. I know it’s very difficult to reinvent yourself within that system. But now, have a look at yourself, be honest, like, ‘Who am I? Who do I want to show the world?’ – put that plan together right now, during this time, because the world is going to open up again and you have to be ready.

The key to that, McIntyre believes, is to cultivate your persona. Wrestlers are much like method actors, in this sense: they have to truly live as their character to win over the investment from an audience. “By the time the crowds come back, they’re gonna care about you a lot more. I think people should really be taking advantage of this time right now to get those characters across while figuring out what’s the best way to go about the matches to make it more exciting for the viewers at home without that atmosphere.”

The independent wrestling scene, in orbit around WWE, was where McIntyre recalibrated after losing his contract. It should not be recognised as a failure, he insists. “It’s the healthiest it’s ever been, to be honest. If you are truly good at your job, and you truly love it, you’re going to have the best time. You are going to make money; you’re going to make a lot of fans – and if you choose to, you’ll probably end up back with WWE. If you believe in yourself the way I believed in myself, go out, have that fun, learn those lessons and better where your weak areas are. One day, you could be sitting there with a WWE championship title.”

It took a long time, however, for McIntyre to recuperate – both on a mental and physical level. In the midst of being untethered from the WWE world, he was dropped on his head during a match, fracturing two of his vertebrae and confined to a brace for two months. While injuries are seemingly inevitable, they can all but destroy a career, unravelling tightly woven storylines planned for years, and forcing you out of the limelight into a darkness you mat never emerge from. Once again, his career was hanging on by a thread.

When he restored himself to his former glory, it was all the sweeter. “When I said I was going to become the biggest wrestler in the world, and ICW [Glasgow-based professional wrestling promotion company] is going to take over, people probably thought I’d lost my mind.” Mick Foley, American wrestling royalty-turned-commentator, famously retracted his statement that he thought McIntyre wasn’t up to the challenge. After completing some promotion for ICW as part of his comeback, he sent the video to Foley who said, “Oh my goodness Drew, where was this guy?” He sent word to Triple H, the Executive Vice President of WWE, to say, “You’ve got to keep an eye on Drew McIntyre. This kid has got something.” He says, “It was great to work really hard and change those people’s opinions and perceptions of me. If you look at the entire WWE chain, all the way to the top, people have been saying such positive things about me and my journey, and it does mean the world to me.”

Part of reinstating himself as the “Chosen One” meant making connections beyond the barricade. McIntyre recalls free time when he went out and sat among the audience. “I was just myself,” he explains. “I interacted with the crowd, and I remember fans stopping and turning back and walking back down because I was just having fun, being silly and sarcastic – telling jokes that aren’t funny half the time – but that’s the real me. But when the bell rings, they always know I’m going to kick butt. I guess that’s part of my charm.”

One of the highlights of Drew McIntyre’s renaissance was when he came face-to-face once more with one of WWE’s most iconic fighters: The Undertaker. McIntyre’s opponent has an illustrious career as one of wrestling’s most visually stunning performers. Making threats and exacting his blows through setting childhood teddy bears on fire and destroying the ring with pyrotechnic powers, he is every inch an entertainer as he is a wrestler. “When I got back with WWE, I had a list of things I wanted to accomplish. Number one was to become champion – got that right here. And up there was getting a big singles match with The Undertaker.”

For a fighter who likening entering the ring for his winning Royal Rumble match to Lady Gaga’s character walking on stage in the musical A Star Is Born, it comes as little wonder that he thinks, “I’m all about moments, these days, rather than just the moves. The moves are cool – the moves make a good match – but it’s all about the story and those moments.” A moment was certainly created, of poster-worthy proportions. It was a hang match, and as a final theatrical flourish, The Undertaker did his signature throat slash, with McIntyre looming behind him.

Hoping for another confrontation with The Undertaker in the near future, in the meantime, McIntyre is sizing up Tyson Fury. His idea comes from his passion for the idea of introduction UK pay-per-view matches. “I never shut up about it,” McIntyre confesses. “I shout it from the rooftops every time I can. The UK deserves pay-per-view: I know it would be incredible, I know it would sell out. It would be such huge news. We absolutely can and will make it happen. I’ve been having this back and forth with Tyson Fury, and his latest comments are that he’s deadly serious about having a fight with myself, be that over here in the US, or it be in the UK. If it took a battle between myself and Fury, ‘The Battle of Britain’, to get the non-wrestling eyes on the WWE product, then I would absolutely do that.”

It’s all to play for, it would seem, for Drew McIntyre. Approaching his 35th birthday, he assures us that despite all he has done, we still haven’t seen the best of him yet. He attributes his golden age to newfound personal contentment, in the form of his life’s anchors: his wife and cats. “Even without the WWE championship”, he says, “would I be happy?” He answers: “Absolutely.”