Metal supergroup AxeWound are set to release their debut album ‘Vultures’ in the UK on October 1 via Search And Destroy/RCA.  The album release will be preceded by the single ‘Cold’ on September 10, and coincides with a UK tour. 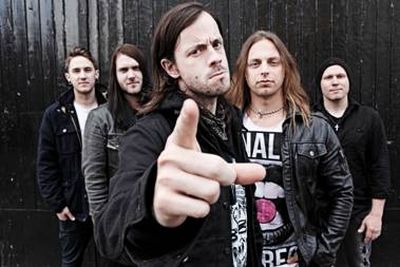 AxeWound’s pedigree is inarguably first class – since they feature guitarist/vocalist Matt Tuck from Bullet For My Valentine and singer Liam Cormier of Canadian hardcore bruisers Cancer Bats, prime movers both in two of the most exciting bands to have emerged onto the metal scene in recent years. The line-up is completed by drummer Jason Bowld (Pitchshifter), guitarist Mike Kingswood (Glamour Of The Kill) and ex-Rise To Remain bassist Joe Copcutt.

The ‘Vultures’ album was recorded in Cardiff at the start of this year, regular Bullet For My Valentine collaborator Martin “Ginge” Ford engineering the sessions. From the outset, the aim was to work quickly and instinctively. In the event, they recorded 11 songs in 11 frenetic days.

“It was very intense, very demanding but that’s how we wanted it to be,” reasons Tuck. “No pre-writing, no rehearsing…just booking a studio and going in and doing a song a day. We wanted to capture something that happened right there and then.”

Says Cormier: “The record is great because it’s been made by a bunch of friends who are just enjoying themselves playing together and doing something that’s different to what they normally do.”

The UK tour dates are as follows, tickets go on sale at 9am on Wednesday August 1:

I think you guys are going to be my new favorite band....when i heard Matt talking about a metal as fuck band with influance from pantera and slipknot i was like FUCK YES and the songs i have heard so far fuckin rule....cant wait fot the album guys....you kisk ass...same for bullet...im ready for it too