Here’s something to make you quiver in your boots this winter…behold the metal super group! Supergroups are a curious thing. The good: Crosby Stills & Nash (later & Young), Cream etc. The downright bizarre: Metallica and Lou Reed, anyone? This time consisting of Bullet For My Valentine’s Matt Tuck, Cancer Bats’ Liam Cormier, Mike Kingswood of Glamour Of The Kill and former Rise To Remain-er Joe Copcutt along with Jason Bowld of Pitchshifter – AxeWound are here to rock! Ready to dispel the myths and let us into the AxeWound consortium, group founder Matt Tuck chatted to Soundsphere recently, just in time for their debut album release earlier this month. 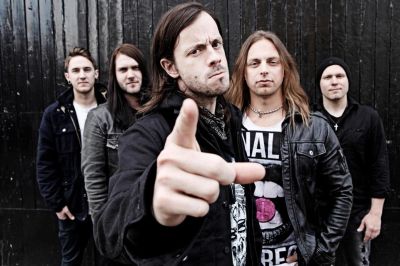 Catching Matt Tuck away from his busy schedule is a scoop, and he was happy to elaborate on how he finally decided to take a short break from being the frontman of one of the UK’s most successful metal bands to create a new side project: “I think it came about as a serious thing in the summer of 2010 when Bullet [For My Valentine] was super busy doing tours and everything just got a bit…fuzzy. It just became a bit of a headf*** really and I just wanted to do something different.”

The decision in the end was the best thing that could have happened, Tuck tells us: “It was the best thing I did for Bullet…it reignited my passion for Bullet and writing the new Bullet record – which we’re writing now – after AxeWound was just like, clear as day y’know?”

With members from across the rock world all chipping into the AxeWound mix, the main challenge became obvious- to get everyone in the same room at the same time, despite individual commitments: “It does make things difficult but we’re lucky that Cancer Bats and Bullet have the same management so they’ve taken charge of the whole process…everyone’s worked as a team on this, as everyone knows that it will benefit every individual who’s there.”

Tuck went on to conclude: “Thankfully everyone was committed when they had the time; they got involved and did what they needed to do as professionally as I’ve ever seen. And that made life easier to get it done in the short window that we had.”

Matt Tuck’s admiration for his new bandmates is immediately palpable as we continue the interview and he had plenty of praise for his adopted AxeWound-ers: “Especially with Mike and Joe, they’re so young…to sit in a room with them, knowing their age and my age, I’m just a little bit blown away by how good they are, and it’s like ‘sh**, I need to step up my game!’. Liam is such a workhorse, his work ethic is the most professional and committed I’ve ever seen, literally from any musician I’ve ever met…and Jason speaks for himself, he’s a robot, it’s insane recording with him and watching him play. As individuals they’re amazing and hopefully next time around on another album we’ll be writing as a five-piece and not a two-piece. The sky’s the limit; it’s scary what we could be capable of when we write the album together next time.” Tuck finally enthuses: “It’s good, but it could be really f***ing special!”

The new album titled ‘Vultures’ was recorded and mixed with a quick turnaround to suit the tight itineraries of all those involved. Tuck explains how AxeWound were lucky to bag renowned American music producer, Machine to mix the album: “When the project was finished we just sent it to Machine in the States and he mixed it. He didn’t have any involvement in the recording process or production; he just kind of made sure it all sounded amazing. Technology these days allows you to do some crazy things in like no time at all so it was really cool and he did a good job. He knew we didn’t have much of a budget so he did it really cheaply and it still turned out amazing, so a big up to Machine, man!”

After some time touring together on the 2012 festival scene, it seems AxeWound have instantly found they feet together and are raring start their upcoming tour to promote ‘Vultures’. Tuck cites how for himself, it has been a uniquely refreshing experience. “Everyone in the band is just doing what they do in their bands anyway, but it’s a little bit different for me, as I’m not the frontman which is something I’ve always been. So for me it’s a little different but for the other guys it’s almost business as usual…we’ve kind of had more stage time together now and I’m settling into that role of being co-pilot. The weight is off my shoulders a little bit…it’s just means I can be a bit more of an idiot on stage,” Tuck laughs, “rather than having a strategy to pace myself like I did with Bullet because we play hour and a half shows sometimes. It’s just like straight out of the gate, hard, heavy, loud and hopefully you don’t break your neck in the process!”

Of course, the lure of the day job never lurks too far from the mind of Matt Tuck, and it seems that the recent playtime with AxeWound has added an extra spring in his step for returning to prepare for the next Bullet record and possible solo work. “With AxeWound I got all this s*** out of my system that I wanted to with Bullet for a while. Being a music fan, I’ve got a lot inside that I want to get out. I still want to do a proper solo record with strings and acoustics and proper singer-songwritery stuff at some point in my career when I get a chance. Getting all that heavy sh** out of my system, as soon as it was finished and I started work on the Bullet record it made it so much easier and we did that in half the time.” Tuck went on to muse about the curse of the established band, warning of the perils maintaining the quality whilst on an upward trajectory: “Having free reign to make an album it’s a big temptation that a lot of bands will fall into, it’s usually the beginning of the end where they stray from that formula of what they do and why people love them. The best way to do it is to evolve and freshen up your identity rather than completely do a 180 and do something off the bat so people are just like ‘Woah!’”

And finally, in true Soundsphere style, we have to ask: Matt Tuck, against a zombie outbreak what weapon would you choose to defend yourself and why? “I would use my AxeWound custom BC…’cause it’s as heavy as f*** and it’ll do more damage than any baseball bat!”