Industrial within the context of rock and metal seems to conjure up a certain image and echoes of a certain time period. It makes sense that music obsessed with the terrifying power of technology would hit its peak of prominence and influence in the 1990s, a time when the place of technology in everyday life was evolving at an extreme pace with the rise of the internet, computers becoming ever more widespread, and the Y2K bug an incoming panic on the horizon. 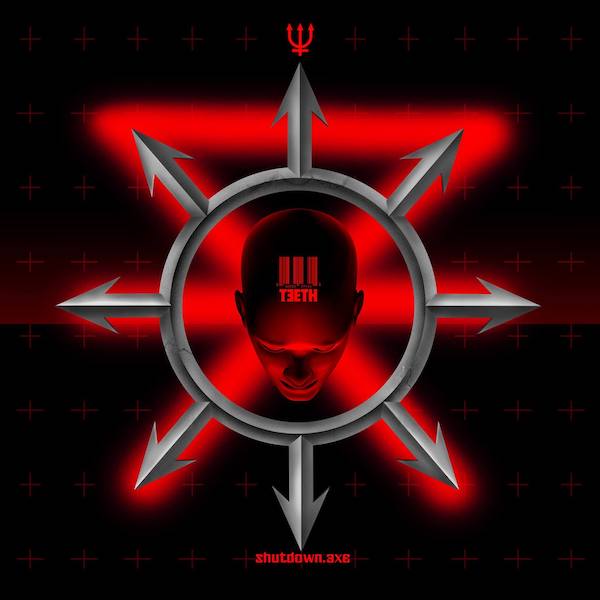 At the same time, pop culture seemed to align itself, the music of Ministry a natural bedfellow to movies like The Matrix. Two decades later, such a zeitgeist style can seem pretty dated, and in truth, maybe this has less to do with the global climate having moved on (it’s not like technology’s domination has slowed down) and more to do with the genre running out of ideas and a dearth of quality in recent years.

Enter 3TEETH, an unashamedly industrial metal band from Los Angeles. with a flair for the visual beyond goofy cyber costumes, often speaking of industrial as a “transgressive art form” spanning more than one medium. They’ve also received prominent backing from one Adam Jones of Tool, who personally invited them to open for the progressive titans on an arena run in the US. A look at their sophomore record <shutdown.exe> shines a light on what exactly makes them a more exciting proposition than any number of regressive industrial throwbacks that pepper the rock landscape in 2017 without ever really breaking through the surface. It’s not that 3TEETH are particularly original, but simply that there’s quality here to back up some of the superlative statements.

Original 3TEETH really are not, the music of <shutdown.exe> indebted in so many obvious ways to the likes of Nine Inch Nails, Skinny Puppy, and Ministry. They do it damn well though, these songs possessing a power and swagger that has been lacking in this particular form for the past however many years. The record opens with Divine Weapon’s ominous chants building through icy synths only to collapse into grinding cacophony, setting 3TEETH’s stall out early. Pit of Fire’s unforgiving advance featuring a punishing kick into its final chorus and the danceable grooves of Atrophy and Degrade makes this record’s opening half compelling and engaging.

3TEETH don’t skimp on the “metal” part of the equation, <shutdown.exe> being home to plenty of downtuned and relentless riffing like the crunch of SlaveGod which Max Cavalera would be proud of. Vocalist Alexis Mincolla seems to channel Rob Zombie’s more sinister side á la Return of the Phantom Stranger, and has a knack for dishing out simplistic but effective hooks like on the de facto title track Shutdown. Production courtesy of Sean Beavan who worked on many of the defining industrial records of the 90s like Pretty Hate Machine [NIN] and Antichrist Superstar [Marilyn Manson] ensures that everything sounds thick and crucially modern despite the songs themselves leaning heavily on older ideas.

<shutdown.exe>’s biggest flaw though comes in its lack of variety, which turns its runtime into a slog in the latter half. Songs are all too often based around one decent idea that doesn’t develop or outstays its welcome, and the record seems to exist in one mid-paced tempo for most of its duration. Even The Downward Spiral has March of the Pigs. The aforementioned SlaveGod and Voiceless aside, which with its almost Linkin Park-esque synths is one of the few moments the album is allowed to take off out of the murk, the second half of the album drags hugely as 3TEETH’s mechanised assault begins to blur.

<shutdown.exe> though does manage to fill a niche few other bands are occupying with this level of quality. It might be less dense and challenging than Nine Inch Nails’ recent EP Not the Actual Events, but it certainly has better songs. It’s a marked improvement over 3TEETH’s debut, and if they can take that even further we may have a real winner.