Album Review: Brawlers – ‘The Romantic Errors Of Our Youth’

Who said romance is dead? Certainly not up and coming punk-rockers, Brawlers, who have just made a noisy return to the music scene with brand new album, ‘The Romantic Errors Of Our Youth’. A relatively new band to the scene, Brawlers first arose in 2013, and have most certainly left a lasting impression on their audiences with their famous hit ‘Instagram Famous’ and the lengthy tour that even took the band across the pond to various European cities. 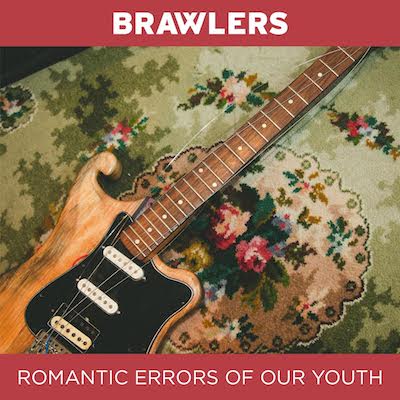 ‘Instagram Famous’ most certainly left a profound impression of the band, judging by the success of their last tour and they definitely don’t seem to be stopping there. ‘The Romantic Errors of Our Youth’ comes with it 10 delightfully up-beat, yet melodic tracks that carry with them the recurring “love” theme throughout the album, something which isn’t exactly a common occurrence in the typical head-banger’s world.

The album opens the right way, with the brief yet heavy paced ‘Anabelle’. Clocking in at a compressed 1:47 seconds in length, Harry Johns declares his love over and over for the mysterious ‘Anabelle’, making us as the listeners question, who is she? Pert’s relentless drum beat throughout this tack combine fantastically with the lyrics, giving the romance theme a quirky punk-rock twist.

Other tracks like lead single, ‘Two Minutes’, in which Harry proclaims his need for another mystery creature, follow this style, combining the classic rock elements we all love to hear with the softer, more melodic lyrics and vocals.

Following on from ‘Anabelle’ is the somewhat angrier and more ferocious ‘Don’t Drink And Dial’, showing that, despite the recurring love theme throughout the album as a whole, this band’s original punk rock roots can still surface.

A track that struck out to me in particular was eighth in line, ‘Nervous Breakdown’. More on the progressive side, this song includes more ‘breakdowns’ than the others, as Harry’s vocal range varies from pure passion, to parts that spit pure venom, yet all at the same time harmonising perfectly with Matt’s raw and collaborative guitar riffs.

This track also tells me that the band aren’t afraid to venture out towards the more controversial side of music – a feature of the punk-rock genre that we all know and love too well. Following this track, ‘Hives’ is an excellent way of connecting with us as the audience, in particular singing about being ‘too partied out’ – something which a lot of us have most undoubtedly experienced – and “needing medicine”, which again touches up on a subject many bands in this day in age prefer to avoid, and complies with the classic “sex, drugs and rock ‘n’ roll” philosophy. In a more love themed album, this topic shift fits perfectly, adding variety and some impulse to their overall sound.

Bringing the album to a close is final track, ‘Romantic Errors’. This melodic yet up-beat song ends things on a pretty perfect note – returning to the more “romantic” theme of the album, the full band finish the song in a harmonising manner, something which is always welcomed with open arms in the world of rock. For me, ending with this song subtly brings the album back down from the more kinetic sounds of tracks like ‘Two Minutes’, which provides an excellent combination of tireless drum beats with a raw, yet tantalising bass line. After all, who said a love song can’t be heavy? This is Brawlers, did we really expect to hear something conventional? No, and conventional is most certainly not what we received with this album.