Dolores Haze is a band that will never fit neatly in a box: never just one block of colour, but a prism of eternally shifting shades. Like all great bands, they delight in warping your expectations. They are unimpressed and care too much; invincible with chinks in their armour; having fun to forget. The all-female Swedish trio are sharpening their teeth for their sophomore album ‘Play Hard Fuck Hard Love Hard’, capturing their frivolity and unfuckwithable attitude.

First of all, Dolores Haze would like you to know that they don’t want to see your banana. The opening track ‘Banana’ – you would be unsurprised to know – is a barely-concealed, tongue-in-cheek lambaste against unsolicited dick pics. More than a few of us will be able to get behind that, no doubt. Any punk-pop girl band is always married to Riot Grrrl movement. Although this is somewhat true for Dolores Haze, their hard shell gives way to a softer, bubblegum-sweet centre. ‘Banana’ is irresistibly playful: soaring choruses with mocking school-girl rhymes. The carefree whistling over throbbing basslines makes ‘Banana’ a certified earworm.

Sweden have a reputation as the pop powerhouse of Europe, churning out sure-fire hits from the likes of Sigrid, Zara Larsson and MØ. Anyone familiar with these chart-toppers will tell you that Scandipop, as well as being female-led, is unshakeably catchy; ‘Play Hard Fuck Hard Love Hard’ has been sanctified with that same blessing. This is why anything Dolores Haze throws at the wall seems to stick. This album is as chaotic as a Jackson Pollock painting: the charm is in the mess. It’s fun, and that makes it far more interesting than anything cohesive. 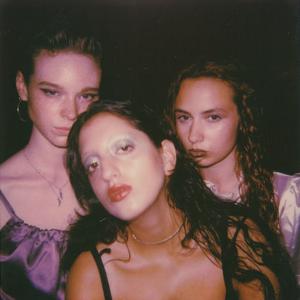 Dolores Haze don’t just flirt with hip-hop, they have an affair with it. ‘FLIP!’ fuses synth that groans like a rusty switchblade with rattling 808 trap beats. This track captures Dolores Haze’s seedy glamour; it’s all about “being hot in thongs and stolen lipstick and hanging out at the club until 6AM.” Unafraid to play with rap sections, their reckless attitude gives way to a vicious lyrical flow. Blowing her nails, bassist and singer Groovy Nickz tells everyone “suck on my ego”. The track is a narcissistic trip written after producer Lil PZ, after meeting Groovy, said “Her spirit’s so high I’m getting vertigo”. Being brats is their trademark – every vice works to their advantage. On ‘Ltd. Edition Bichon Frisé’, Dolores Haze take aim at people who are so good looking they can get away with anything – “but it’s also about walking your dog in the park”, if you’d prefer. They toy with the pitch, making the vocals a child-like caricature in the same vein as BROCKHAMPTON. These preppy playground rhymes set the field for their excess, just like the hyperreal sound of Charli XCX. Dolores Haze are undaunted; unafraid to say “fuck you” – in fact, there’s nothing they love more.

The latter half of the album shows a side of vulnerability to the band. These are the songs you play when the party is well and truly over. This is what’s left. ‘The Final Show’ has melancholic guitar plucks, burying a relationship that will not get any better. It straddles the boundary between the sadness of holding on and the desperation to just let go. The more plaintive tracks on the album accentuate Dolores Haze’s skill of building an atmosphere. ‘I Never Saw This Coming’ calls to mind a ballerina twirling in a twinkling music box. Splattered percussion is met with cinematic guitar riffs, creating a sombre elegy for a normal life, for home. The lyrics, written by ex-member Groovy Fuck, reflects a struggle to come to terms with the hollowness of touring life. There is something unsettling in its foreshadowing.

Dolores Haze wear their influences proudly on their sleeve. They tap into the expansive ambience of the West Coast blues. It calls to mind the theatrics of Lana Del Rey. Her particular brand of ‘little girl lost’ is interwoven with the identity of Dolores Haze; they share the Lolita mythology, the character from whom the band’s name is derived. On the namesake of the album, ‘Play Hard Fuck Hard Love Hard’, Coquettish whispers meet glittering choruses that are the anthems bracing, all-American freedom. The closing track ‘Watch it Burn’ lends from Twin Peaks-theme guitars with rattling drums and sumptuous orchestration. Groovy Nickz pleads, “You know that I would die for you / But you, I wish that you would, too”. The track, expanding sleepily past the five-minute mark, is the sad, fucked-up epic of the album.

This is, unquestionably, one of the most exhilarating pseudo-pop albums to listen to. Dolores Haze are not only confident in their identity, but most importantly, confident in their sound; confident enough to run, arms flung wide, into whatever genre, whatever sound they feel like. It works every time. There was probably never a moment where Dolores Haze thought they couldn’t, and that is one of the most important attitudes a band can have.