Following their 2012 debut LP, ‘Light Up Gold’, Brooklyn’s Parquet Courts deliver another welcome dose of their witty, angular slacker sound. And while ‘Sunbathing Animal’ may feel like more of the same on first listen (and considering how good their first album is, this wouldn’t really be such a bad thing anyway), there are kernels of development throughout the album which reinforce PC’s position – in my humble opinion – as one of the most exciting bands around right now. 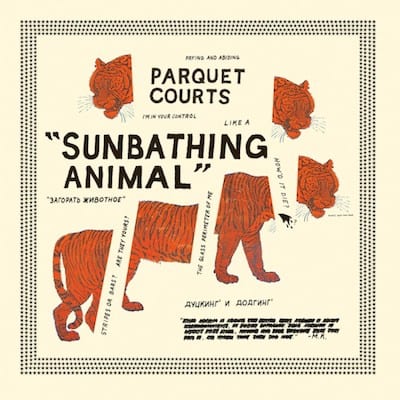 The album opens with ‘Bodies Made Of’, featuring a steady, metronomic guitar riff and a bass-laden groove which is difficult to resist bobbing one’s head to. This shifts into ‘Black And White’, a brisk stomper driven by singer/guitarist Andrew Savage’s distinctive droning shout. Jagged, deliberately atonal stabs of guitar give some sense of what it might sound like if Greg Ginn had dialled down the distortion and played for Mission of Burma instead of Black Flag. It’s very cool. The third track, ‘Dear Ramona’, revisits the vaguely melancholic meandering of songs such as ‘N Dakota’ or ‘Caster of Worthless Spells’ from the first album, and the chorus of “She ain’t never gonna open up/no, she ain’t never gonna open up/not to no-one” is destined to be an audience singalong highlight at live shows.

These three fairly diverse songs lay down the tone of the rest of the album and summarise the growth of the band; it’s the established PC sound, but given some extra layers, satisfying the patient ear with even more quirks and textures than ‘Light Up Gold’ (which is arguably more immediate but therefore slightly less rewarding over time). The guitar work is great throughout, veering from tasteful bursts of noisy feedback to more restrained, bluesy phrasing and back again. Savage’s lyrics are intelligent and introspective, and the occasional surprise arises: the muted, bouncing guitar of ‘What Colour Is Blood’ has a touch of AC/DC to it, and ‘In The Garden’ brings the album full circle by echoing the guitar riff of ‘Bodies Made Of’, using some subtle piano and enigmatically emotive lyricism (“let me slip into my insomniac shoes/step out the door into the garden of my unpaid dues”) that are reminiscent of David Bowie.

But whoever the band’s influences are (indirectly or otherwise) is essentially unimportant. What’s important is that however much people might moan about ‘the state of music today’, condemning all modern music to the sh*t-heap just because of the occasional vapid boy band or derivative conveyor belt X-Factor contestant, there are still bands waving the flag for smart, interesting, passionate music. There’s still Parquet Courts.