Zeromancer are a real pedigree industrial rock act, with over ten years of experience, a handful of club anthems, and four albums to date. So ‘The Death Of Romance’ – their fifth album – has an awful lot to live up to. It would have been easy for the band to churn out a cheap follow-up, or sail off on a new course, disappointing those accustomed to their unique style. It hasn’t happened. Zeromancer have managed to raise their game again, producing an album that’s very them… but better: Lyrically dark and crisp; a wall of sordid guitars and synths. 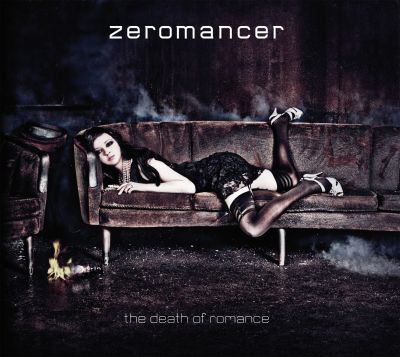 The album has a great overall sound: Heavy on guitars, rhythmic, catchy, and crystal clear. It’s good quality stuff too: Alex and Kim actually sing, the guitar riffs are fresh, the synths sound gritty without sounding badly distorted, and their work is produced to a standard not often heard on the alternative scene.

The album starts with an intro track that leaves you in no doubt that the next 45 minutes are going to be dark, stylish and sexy. Then you’re accosted with ‘Industry People’; the obvious floor-filling track that’s probably going to be getting an awful lot of play for a very long time.  ‘The Hate Alphabet’ follows hard on its tail: a staggering, swaggering anthem that also deserves to be big. Having had the opportunity to play both tracks in front of the Exile crowd, I can say with clarity that they transfer from the front room to a somewhat larger venue exactly as intended, with real sing-along value to their choruses.

Next up, ‘The Death of Romance’ is the album’s title track. It’s a sombre, classically gothic and tragic tune. It’s not really to our own taste though, and there’s a little too much reliance on the title-line. To us, ‘The Pygmalion Effect’ eclipses it: A killer ambient track with a slow pace, haunting melodies, definite originality, and that ‘tingly all over’ quality.

‘Murder Sound’ picks the pace back up a bit, with grinding riffs and featuring that unmistakably Zeromancer sound. Far from loosing its way halfway through and devolving into filler, the album still has definite direction. ‘Revenge Fuck’ is a roaring, rocking wall of solid Zeromancer: Foot thumping, dirty, clever. ‘Virgin Ring’ steps in seamlessly: Taunt, tight, with a soaring and uplifting chorus that makes you want go and look up the band’s tour dates. However, the quieter aspects of the track lack the tension and raw sex-appeal that typify the band’s work.

‘The Plinth’ is a slightly distorted rock track: Verbally astute, with a stunningly catchy guitar riff, and slightly NIN-ish synth undertones. It’s followed by the slowest tune on the album – ‘Mint’ – a seductive, melodic, quiet, and a perfectly competent track, but you can’t help but feel that the rolling rhythm is just holding back a little too much. That said; it’s a track more suitable for intimacy than solo review.

Finally, ‘V’ is a little diamond, tucked away at the end of the album. The chorus line is perhaps a little is repetitive, but the verses clever and sophisticated and backed up with a great, catchy, sound. In many ways it’s one of my favourite tracks on the album. If I was to pick a real fault with the song, it’d be the brutally sharp cut to the album fade, which is going to catch out a lot of DJs.

Looking back on what I’ve scrawled while listening to this album, the word ‘Zeromancer’ seems to crop up more than any other. And that’s really what this is: Unmistakably Zeromancer. If you liked them before, you’ll love them more. And if they’re new to you… well there’s no better time to get on board.