After releasing their debut EP ‘Vagabonds’ in summer 2009, northwest duo 19ninetynine have produced their first full-length album, entitled ‘Put Out The Sun’ – the many months of work are evident, considering the band are unsigned and this is their debut, each track is constructed and produced down to the smallest detail to give 10 tracks of decent industrial-tinged EBM that carry the listener through the creators’ damaged world. 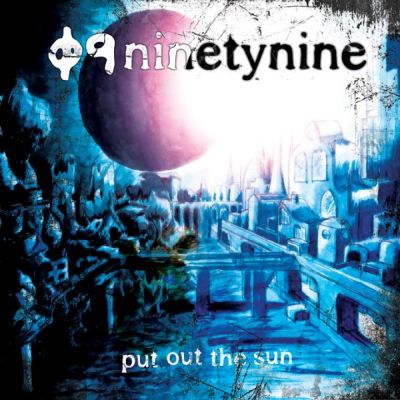 Post-apocalyptic sound bites open first track ‘iThink’ and a resounding, heavy bass sound underpins frontman Chris Wyrd’s vocals as the song gives a taste of what is to come – an album focused on a failing future with a beat you can dance to. Guitars help give the beat a serious feel and the mix of the two mean this song should tick a few people’s boxes.

‘Loveless’ follows and from just a few seconds in it is clear that it will not leave well alone. A promising intro turns into an even more promising kick – this one is definitely a futuristic dancer, but it isn’t until the synth-y guitars come in, and Wyrd’s literally screaming vocals, that this becomes more than a standard rocky EBM track – the slightly grittier touches make it edgy and sharp, one for the dancefloor without a doubt, add pianos at the end and the formula is complete.
The strong tempo does not let up for track 3 and neither does the desolate theme as ‘Consume’ comments on our modern obsession with material things. As the chorus chants relentlessly “Work, buy, consume, die”, the guitars hit hard adding impact to the big synth breakdown and there’s another decent album track in the bag. With the catchy hook it could be one to recognise 19ninetynine for.

Meanwhile, ‘Snow White Eyes’ slows the tone with its atmospheric, creeping style, creating an electro-gothic fairytale of a song while the following ‘Restless Sky’ is more pop influenced with an industrial breakdown mid-way making for a catchy peak in the album. Track 7, however, is an epic one, with huge production making ‘After the Rain’ a personal favourite – an upbeat yet slightly haunting offering which leads perfectly into ‘Everybody Knows’, another big track, filled with dark, gritty sounds. Here, thumping bass and guitars again mix well with classic bleeps and cymbals and the female backing vocals provide more layers producing a more mature sound.

The penultimate ‘Waiting in the Wings’ which, when it kicks in, is a dangerous creation with distorted guitars building into a crescendo which would have been a high to finish the album on, especially with its faded ending, it sounds like the last song. ‘Totality’ completes ‘Put Out The Sun’ however and sums up the entire album – dark, EBM influenced, industrial sprinkled dance and a great debut.