Action Directe recruited their band’s name after the left-radical French terror organisation in the 1980s. Well, the fight for the rights of workers autonomy and similar rules for all looks back on many examples of communist history; now we face a band that draws those signs on their message, last but not least on the website hammer and sickle are shown. They call their music a mixture of Punk, Industrial and Goth and talk about the Sex Pistols, The Clash and Killing Joke as their influential ancestors. 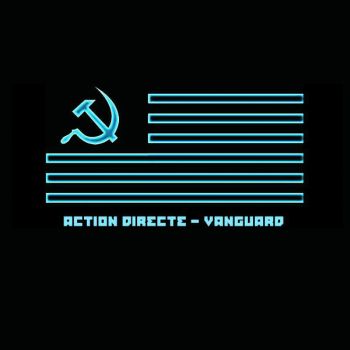 Let’s switch on the music. From beginning on the electronic components stand right in the front. A minimalist synth tune opens the entrance with ‘Storming Heaven’ and repeats in endless loops through the whole song; the voice shouts the messages and after two minutes the drums heavily join in. ‘Frontline States of Mind’ builds on the same structure and ingredients, interspersed with recorded real sound-samples; same with the following songs: minimalism is obviously the stylistic device the music bases on. Straight forward driving rhythms with very simple drum-beats create a danceable tune. It’s all about synth programming that’s built to cater for the EBM floor, and a quite restrained electric guitar adds to the aggressive mood. But the real hawkishness and personal note is done by the distorted shouting voice that doesn’t differ much between the tracks. The slower ‘Natty Droid’ reminds of The Clash’s production with a kind of reggae-rhythm, that gives a nostalgic feeling. The closing track ‘We Can Rebuild Us’ is harder, more pure and punk; the drums are certainly harder and the vocals are not distorted – the electronic mist is clearing away.

If it were not for the strong political attitude, this record wouldn’t be that different to many of today’s Industrial or EBM releases which dominate clubs today. However, listening to the first seven tracks still becomes boring after a while, because nothing changes; the speed, the expression, the voice – all stay nearly the same. Even minimalist art turns into something monotonous and uninspired. The Industrial sounds build swathes of well-tempered fog around the wrath and political dedication. As a result, the punk of this record loses its freshness and mutates into a consumer’s product without serious value.