In our latest review, we were lucky enough to listen to the upcoming album, ‘Black Dog Barking’, from face-melting Australian rockers, Airbourne. The band’s third studio album will be available on May 20, just between their US and European tours, including a trip to the UK in June for Download Festival. 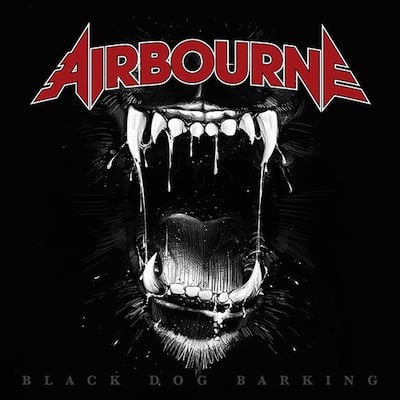 The album kicks off with the apt, ‘Ready To Rock’ and harmonic chanting from the band, leading straight into lead vocalist, Joel O’Keeffe’s throaty Brian Johnson-esque vocals. This in-your-face track sprinkled with memorable group chants of “are you ready to rock?”, mind-numbing guitar solos and driving drum beats from O’Keeffe’s brother and drummer of the band, Ryan O’Keeffe is everything we could ever want from Airbourne to start off this highly anticipated album after the success of their previous album, ‘No Guts. No Glory’.

While we are impressed with everything about ‘Ready To Rock’, we expect that track to set the tone for the album and unfortunately the second track ‘Animalize’ just doesn’t keep up with the energetic, hard-rocking tone. Don’t get us wrong, it’s a fantastic tune that perfectly fits the Airbourne formula of classic rock lyrics, infectious melodies, and gut-wrenching guitar solos, but the track slowed the album slightly.

The next two tracks, ‘No One Fits Me (Better Than You)’ and ‘Back In The Game’, had the same effect as ‘Animalize’ in the sense that they are great, with everything you would expect from an Airbourne effort, but don’t really do anything special for us like the first track. Then we hit the fifth track, ‘Firepower’ and a sigh of relief comes over us. The track starts with Ryan O’Keeffe’s dynamic drums and a steady guitar solo taking us into Joel O’Keeffe’s oddly seductive and captivating vocals. ‘Firepower’ is a sexually charged track backed with heavy rock, energetic screaming, and an overall exciting vibe. This track definitely resets the tone of the album for us.

The album ends with title track, ‘Black Dog Barking’ leaving us just wanting more. O’Keeffe’s vocals start the track followed by class guitar riffs, a steady rhythm led by guitarist, David Roads, and fantastic bass lines from bassist, Justin Street. This track really reminds us of ‘Bourne’s former touring partners (and massive leg-ends) AC/DC – good quality business as usual, then. This is a great twist of modern-meets-classic rock with the nostalgic melodies and guitar solos that are lacking in most mainstream outfits today. This album will definitely make you want to break out the hairspray, put on your tightest leather leggings, turn up the stereo and headbang until you can’t stand up anymore. Best foot forward, then.