By Cyrus_Crashtest May 6, 2009 October 29th, 2016 CD
No Comments
It seems Alec Empire is a busy man – not only has he been working on his usual musical outputs, but in the last year he’s managed to find time to score film soundtracks and diversify his own unique style. For those that still think of him purely as the ATR front man / sonic terrorist who brought out the skull crushing ‘Intelligence and Sacrifice’ you may find yourselves a little bewildered with his latest offering. 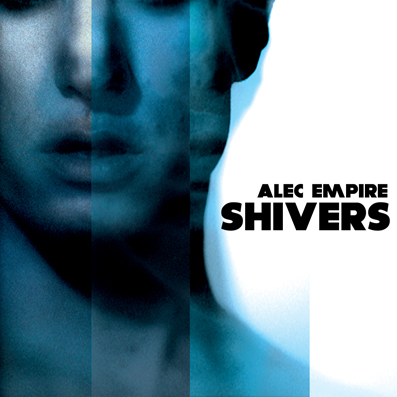 Shivers still incorporates the layers of distortion and blood burning beats we have come to expect from Mr. Empire. It still has those poetic levels to his lyrical content. It still feels like Alec Empire, but the dirt-edged, wall of noise, sensory assault has become altogether… shinier?! Somehow it’s familiar enough, but there’s something more rock ‘n’ roll about the guitar sounds, something more progressive about the synths and something almost retro at moments. No surprise then, that this isn’t Digital hardcore – this is a different beast altogether. This… is the sound of new Berlin.
From the opening track’s two-step beat, winding synth ferocity and pounding rhythms, long term fans will feel at ease with their fix of neo-junglist ear bashing before being dropped from a great height above the cold breeze and epic sounds of ‘Shivers’ – a track which scrapes at the surface of the Stooges’ more experimental moments. The echoed vocals and hypnotic bass draw you in unexpectedly before dropping you comfortably into the garage and techno-edged temptations of ‘Baby Skull’.
Thus unusual blend of his usual ethics of style and the new angles of sound that have been utilised combine to provide something both refreshingly new and reassuringly still Alec Empire and continue throughout the tracks on offer. The hardcore, long term fans will find some comparisons with the likes of classic track ‘Low on Ice’, and may find the offerings here to grow upon them over time; rather than instantly grab them and smash their heads into submission, but Alec Empire has never been one to stay stuck in a rut. He’s an innovator. Likewise, new listeners and those that have found themselves unable to survive the onslaught of previous releases should give this one a try – it may just open your ears to the possibilities out there.
As this mini album is a mere taster of what to expect from his forthcoming full album, I think it’s safe to say that things are changing – and change for the better.
****/5
For more information visit the band’s Myspace and website.
Check out two making of videos below:
Part one:
http://youtu.be/ycPZF0s-u30
Part two:
http://youtu.be/_7KfO1ZdBOM
Buy the album here.