For years, the name AntiProduct has flittered its way around the British music scene like a bad smell or a long forgotten memory. Either way, the band have always sat on the very edge of things; with their audience waiting for them to hit it big and do something truly ground-breaking and amazing. Sadly though, said success never seems to have materialised and the band remain in an incredibly bizarre state. This is of course a great shame, as they have always had the potential to be as enthralling and successful as bands like The Wildhearts – just without the drama. 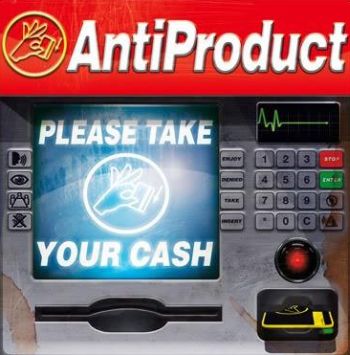 That said, there is hope in the form of new album ‘Please Take Your Cash’ – a sure fire contender for happiest album of the year, if not the decade. Amongst the wonders that this album has to offer are the emotive and bouncy jaunt of ‘Surfin’ The World’, quickly followed by the metal-tinged, head-fu** that is the title track ‘Arms Around The World’ – a tune that switches from KISS-sized riffs to a brilliant chorus, before coursing into a Strapping Young Lad-esque middle section only to drop into bluesgrass and acapella sections.

Elsewhere, tracks like ‘Party’s All Over The World’ and ‘Best Day Of Your Life’ are very much rooted in pop-rock, and wouldn’t be out of place on one of Ginger Wildheart’s countless projects; with their fine choruses, mahoosive riffs and crafty songwriting.

If any further proof is required, one should examine the cathartic release of ‘I Will Not Go Quietly’, which complete with a chant-a-long chorus and malignant metal qualities are fine, bright shining examples of just how forthright this band can be. While their cover of The Beach Boys’ ‘Good Vibrations’ is solid evidence that their tongues remain firmly in collective cheek, as they execute the cheery pop anthem with great aplomb and joy, leaving one to think that they believe every word they’re singing.

Elsewhere, tracks like ‘When We Find Love’ are slabs of pure rock gold, as the near endless chorus is filled with an incredible sense of urgency and power. Closing things is a random track which sees the band’s two female members Claire Pproduct and Milena Yum comparing bad smells and commenting on the size of each others bust with great hilarity. Of course this hammers home the notion that while this band aren’t the most serious group, by God they can write stunning pop rock songs. Let’s hope they hit the road soon, as the UK needs this lot.