The songs on this third album from Brighton-based duo Blood Red Shoes have been written from on-tour experiences; from breaking into Keith Richards’ hotel room, fighting bouncers and getting robbed by prostitutes. Ansell has been clear about his intentions to shun the idea of the “sensible, clean cut modern band” with this album. 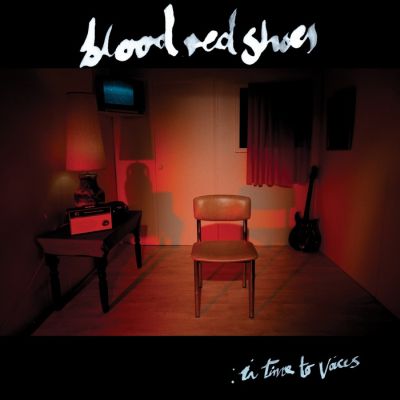 Dubbed the duo’s “coming of age” album, the pair have been building on their punk roots and moving into a more three-dimensional sound combining heavy rock, melancholy soundscapes and classic song-writing. Kicking off with title track ‘In Time To Voices’ starting with Laura’s hypnotic vocals followed by a rhythmic drum beat that draws you in, slowly building up to the much heavier chorus. The pair has obviously been much more experimental in this album, trying out sound effects to cancel out the limitations of their small size and number of instruments they can use.

The track ‘Cold’ is a striking effort with an erratic drum beat and strong vocals from Laura-Mary; this may prove her to be a lead rock female among the ranks of Karen O and Shirley Manson in the very near future. Of the track, Laura-Mary says, “Steven started playing this weird drum beat in soundcheck and I wanted to make it into a song, so i found this mean riff to play over it. It has a hip-hop groove which is something we’d never tried before”. Tracks such as ‘Two Dead Minutes’ and ‘Night Light’ combine chilled vocals with dirty riffs and acoustics, whereas later in the album ‘Je Me Perds’ throws the tracklist off-kilter with a fast punk rock riff which lines it up to be a definite crowd pleaser.

The album ends with ‘7 years’, which showcases Steven’s clear vocals pushing through the rhythmic drum and guitar, adding to the overall impact of this standout tune. The song-writing is also a big part of the band’s new sound, taking inspiration from “rawk” legends such as Black Sabbath, Fleetwood Mac, Led Zeppelin and The Rolling Stones. A combination of confident vocals, anthemic choruses and hyperactive drum grooves make Blood Red Shoes a band to keep an eye on, because this album deserves to be huge!