Oh that tricky seventh album syndrome – that’s a thing right?  Serious props (because I’m that street yo) are due to Blue October for still being with us in the fickle contemporary musical climate.  We see bands come and go with greater haste than speed daters at Katie Price’s house, and yet Justin Furstenfeld’s not-so-merry crew are still here, and they’re buried up to the misery glands in album number seven. 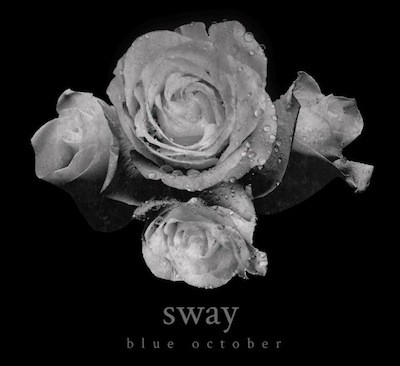 First the good news – even this many releases into their (kind of) illustrious career, the band are still learning and ‘Sway’ is a definite improvement over the maudlin sentimentalism of ‘Any Man In America’ (or album number 6 to you and me). Dwelling on personal misery, and crying over the spilled milk of one’s relationship hiccoughs, is obviously a staple of rock song writing, but that last album was self-indulgent bordering on irritating.  You want to evoke empathy and a sense of a collective need to fight, and share in the remarkable emotional depths the human spirit can plumb. You do not want everyone listening to your infernal moaning to respond with a collective howl of, “Just man up!”  Fortunately, ‘Sway’ will not have you doing that.

In fact there’s quite a bit to commend on this album.  The whole record feels like a lot of love went into its inception and recording. It’s smooth, clean, crisp, and everywhere the production sparkles as if it were blessed by the tech fairies. The opening double-header is a sombre pairing that ensures the album sort of whimpers into action.  Rather than a bang, we travel from mellow acoustics, into slightly less mellow electro-cheese. Third track ‘Angels In Everything’ finally kicks things up a gear (well in a Phil Collins kind of way), but then ‘Bleed Out’ slows things up again with the congestion only an over-the-top power pop ballad can bring.

While you wouldn’t go so far as to call it “experimentation” there certainly is some variety here.  The epic (in length if not content) ‘Debris’ seriously threatens to go somewhere several times throughout its overwrought meander, and though it never quite does, the promise is still lurking in the background. ‘Things We Don’t Know About’ is a nice idea, and it is as sentimental as the band dare to venture on ‘Sway’, unfortunately this ode to a child (the subject of a custody suit, after Furstenfeld added another divorce to his personal discography) is let down by a total devolution of a chorus.

There follows the remarkably similar sounding pairing ‘Hard Candy’ and ‘Put It In’.  The earlier having a particularly pleasing stomp, and the latter employing a perfectly radio-hugging chorus, it seems strange that these two tracks weren’t used for their component parts to create a single track which could have been a true standout on the album.

‘Things We Do At Night’ is a definite highlight with some inventive drumming (really the only time that can be mentioned regarding any of the musicianship on offer here) and some fresh sounding vocals. Sadly it also employs some criminally lazy lyrical work: “Things we do at night, we’re keeping it together ‘til the morning light.” Are you indeed?  Well, have fun, I will go and strangle my guinea pigs in frustration over the flames of disgust that now burn so savagely in my gut over your startling and inventive use of rhyme (am I taking this too seriously?).

If you’re a Blue October fan this will more than service your cravings, and it is definitely a shuffle in a positive direction. It’s slick, it’s pristine, it’s often good, but it is, above all else, safe and uninspired. Maybe that’s the niche. ‘Sway’ won’t rock your world, but it might cleanse your palette like a lemongrass smoothie, leaving your musical colon squeaky clean for the more challenging tuneful digestion you have to contend with this summer.