If there’s one thing you definitely can’t accuse Flashguns of, it’s rush-releasing their debut album. After a delay from its intended release in July, ‘Passions Of A Different Kind’ finally arrives in October, more than three years on from the early buzz created by their performances at Reading and Leeds in 2008. In the interim, they’ve slimmed down to become a three-piece, released a pair of EPs, and toured relentlessly – but has taking their time to release their first full-length record paid off? 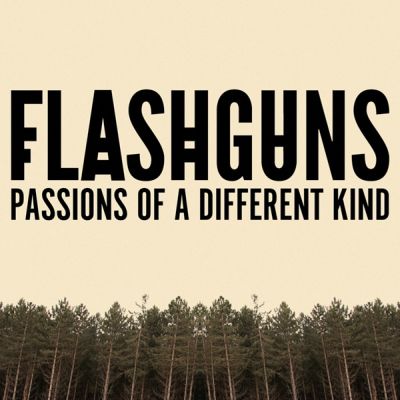 Opening track ‘Sounds Of The Forest’ certainly makes for a punchy statement of intent, with a riff that’s reminiscent of early Feeder driving the song forward atop a relentless drumbeat. The album’s title track is next, bringing with it a somewhat abrupt change of pace – ‘Passions Of a Different Kind’ is a dead ringer for The Temper Trap, from the soaring chorus vocal to the echoing, melodic guitars that permeate the track. Thankfully, ‘No Point Hanging Around’ manages to marry the two styles together fairly well – lead singer Sam Felix Johnston’s vocal takes the lead in the verses, while the grungy guitars are at the fore during the song’s chorus.

Lyrically, the album’s most prevalent theme is that of love and relationships, and inevitably that makes it a bit of a mixed bag. The band attempt to conjure up swooning romance on ‘Candles Out’, but the feeling is marred somewhat by clunkers like “The spread looks good to me/but not half as good as you girl.” By contrast, middle-of-the-road rock song ‘Good Breeding’ isn’t one of the album’s biggest highlights, but it contains a genuinely thought-provoking insight in its chorus – “Is love just a word we use to describe a moment in time?”

Unfortunately, the band’s attempts at slower tracks don’t quite come off as well as their more upbeat numbers. The slower tempo of ‘Heat And Fire’ lays bare some dodgy-sounding lyrics (“I lead, you follow/I feed, you swallow”), and meandering 7-minute album-closer ‘Racing Race’ keeps threatening to go somewhere – teasing you with the promise of a big payoff, but never quite delivering. The exception to this rule is slow-burning anthem ‘The Beginning’ – a track that combines tasteful drumming and understated guitars with soulful vocals to form a surprising highlight.

While the first half of the record feels stronger overall, the songs in the latter half still generally do enough to stave off boredom. ‘Come And See The Lights’ is a pretty straightforward number, but its yearning chorus helps to elevate it above accusations of mediocrity. On the other hand, penultimate track ‘Noah’ mixes things up with a minor key feel and an interesting instrumental section, hinting at potential that has perhaps remained untapped during other tracks on the album.

Ultimately, ‘Passions Of A Different Kind’ may not change your life, but it’s a confident and largely well-executed debut record. Hopefully it’ll provide this young British three-piece the platform they need to go on to bigger and better things.