Leeds based alt-rockers Leatherhead pull-out all the best bits from mid-90s rock and metal music along with some tasty electronics and serve to your aching lobes with a dash of angst and a full dose of attitude. 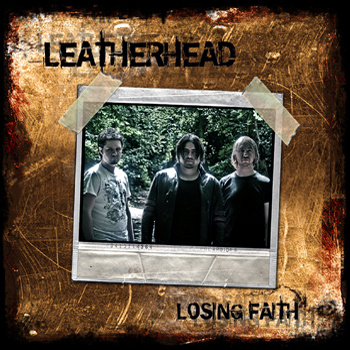 The album’s opener ‘Roman Candle‘ is a defiant mix of grunge and Industrial with hard-hitting drums, vibrant guitars and prominent vocals – imagine Pearl Jam battling with Filter and you are half-way there. This stuff is seriously emotive modern electro-rock with no frills. Follow-up ‘Break You Down‘ works in a similar way attacking the senses immediately with evocative lyrics and heart-wrenching synth elements.You will surely find something to identify with here and whether you want it to or not, this will strike at your core with its affecting guitars, atmospheric beats and slight classical influence.

‘Everything I Am Not’ strikes as a potential floor-filler that builds upon a decadent backdrop of cutting electro shards and varied vocal tones to produce a standout tune that will no doubt have many fists pumping when the band break it out live. In contrast, ‘Null And Void’ starts of slow and develops into a pulsating mass of dirty alternative music based around a variety of themes including greed, hate and lust – the perfect cocktail for a great heavy-rock tune then.

Next offering, ‘The Path I Am On’ moves things forward on a different note with keys opening up before giving way to softer vocals and some grandiose synth work. This one sees the group explore their more sensitive side, and it packs in a particularly accessible almost stadium-worthy rock sound.  The disk’s title track meanwhile, is without doubt our favourite as it nods to 80s classic rock with some sing-a-long lyrics and beats to inspire a good ol’ headbanging sesh – simply bloody epic, baby.  Meanwhile, ‘Crawl’ sneaks into the ear with some sultry beats ala’ NIN and then proceeds to launch into a euphoric rocker that demands movement and works on the senses just like all of your favourite club tracks.

‘Belong’ will smack you across the face with its straight-up bruising grunge style featuring winding guitars, intelligent lyrics and intricate drums that brush-up against the usual backdrop of buzzsaw electro sounds. This acts as a fine lead-in to the soulful ‘Broken’ which is as schizophrenic and varied as anything that has come before. One second you are slowly gliding through a chilled-out musical soundscape chillaxing and the next you are riding chaotically on a rollercoaster of violent emotion that jerks you every-which-way…enjoy that one.

‘Halfbreed’ hits hard next with a stomping sound that takes all the accessible bits of Stabbing Westward and sticks them in a blender with a few slices of raw grunge and a glob of delicious nu-metal to un-wittingly create what should be a future Leatherhead anthem. Similarly, ‘Now I Am Alone’ builds nicely on solid beats, addictive riffs and an atomic vocal range for a fist-pumping, leg-shaking number that will inspire your ears to twitch and force your fingers to move in time with the chords.

The final offering on ‘Losing Faith’ is ‘Senseless’ and it again sees the band change tack and take the listener of an emotive journey through four minutes of soft-yet-uplifting rock music thus creating an ultimate ballad and an absolutely blistering fine finish to a fine debut.

This is definitely one of the year’s most essential Industrial rock albums.

For fans of: Sunna, VAST, Filter

Check out the video for ‘Roman Candle’ below: