When you come right down to brass tacks, Vancouver isn’t the first place you’d think of as a hotbed of musical talent. Sure, it’s the birthplace of the legendary Skinny Puppy – but it’s also the city to blame for such luminaries as Bryan Adams, Sarah McLachlan, Michael Buble and Nickelback… 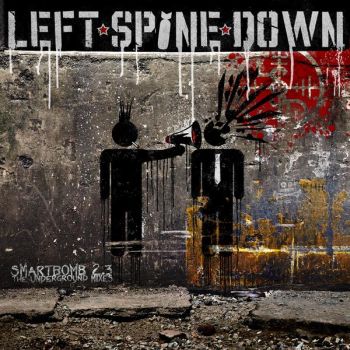 Left Spine Down (LSD for short- one assumes that the acronym is deliberate), therefore, have a lot to live up to. Sure, they feature Jeremy Inkel (Front Line Assembly, Noise Unit) and Denyss McKnight (The Black Halos) but that’s no guarantee they’ll be any good – as we all know from bitter experience, for every Ozzy or A Perfect Circle there’s a Two or a Methods Of Mayhem. Likewise, when you see the words “remix album” your heart very often sinks – with very few exceptions it usually means you’re in for bloated, turgid, self-indulgent nonsense.

So it was with more than a little trepidation that I sat down to listen to ‘Smart Bomb 2.3‘, their new remix album. Thankfully, I needn’t have worried. To start with the music itself is fine – think a swaggering, snarling, snotty Generation X on steroids, or the sneering punk ‘n’ roll of The Misfits, circa their Michael Graves era- and secondly the remixes (provided by the likes of Helalyn Flowers and Angelspit to name but two of the artists lending a hand) are top-notch dance-floor fillers to a one. The several re-workings of former single ‘Last Daze‘ are of particular merit, and I can imagine any of the remixes of ‘Welcome To The Future‘ becoming quite the anthem given the right crowd. The beats loop and flow like mating snakes, and the choruses are as infectious as a particularly virulent strain of swine flu.

That’s not to say this is a perfect release, however. There are places in which the original material comes across as a little forced – the whoah-whoah-whoahs of ‘Last Daze‘ are almost as if Bon Jovi had decided to release an industrial track, for example, and in others the imagery seems a little clichéd, but that might just because of the amount of cookie-cutter drum-‘n’-bass-meets-Hot Topic industrial bands out there at the moment. Some might be put off by the ethereal nature of some of the remixes, but I say that’s their luck out – why limit yourself to just one genre?

Another potential banana skin worth mentioning is the fact that this is a double album, a fact that might be a little off-putting to a casual listener, but even that can be seen as a plus point – you’re getting a whopping twenty seven tracks and three videos for your money.

So I suppose the best thing to do is go into this with an open mind, ignore the hype and leap into the unknown. You might find it a bumpy ride- but might also find yourself with a new favourite band.

And after all, when you think about it, isn’t that what we’re all looking for?