Female-fronted bands are becoming increasingly prevalent in today’s modern music scene with bands as diverse as The Birthday Massacre and Die So Fluid, having recently released albums. Hailing from London, Lilygun are the newest edition to this scene.. 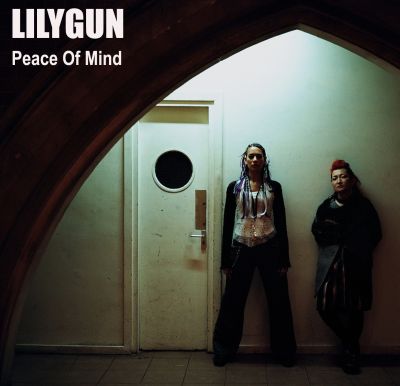 Anna-Christina, the main singer, guitarist and principal song writer, has a revolving door of musicians to help her create her blend of post goth and rock. The only other long-term member is the bass player, just going by the name of Piranha. Another notable player in the current ensemble, is the legendary session drummer Robin Guy who has worked with bands like Rachel Stamp, Antiproduct and Faith No More.

After some high profile support slots at some of the top underground venues, they have released this EP comprised of three songs: ‘Conversations‘, ‘My Ways‘ and ‘Peace Of Mind‘ (two of which have already been released as singles). The individual components that make up each song are solid and tight. Unfortunately, when combined they lack the dynamic to produce something engaging or eventful. The sound is lifeless, and emotionally redundant, caused primarily by the lack of charisma and energy. While the singer is obviously a talented vocalist with a broad range, she doesn’t use it to her full potential resulting in a very unambitious and dull sound.

In all, it is mediocre, but never quite delving in to the realms of being bad. It just doesn’t spike, there is no flare to draw you in, and no true feeling or expression to be felt. There are some good ideas in here, but they are just pulled off in such a lifeless way, that it forces itself to become background music even when you are trying to focus on it. If you like your rock either monotonous or uninspired, then maybe Lilygun could be for you.