Every track on ‘Simple Math’ is an achievement that Manchester Orchestra should be proud of. This record is brilliant; it really is that simple. ‘Simple Math’ is the third full-length Manchester Orchestra outing, and it is probably their most mature, well-rounded and neatly crafted offering yet. Usually, when someone says the words “concept album”, you would be excused for running to the hills, but we won’t let you off this time. Concept albums are known for being self-indulgent and pretentious, but Andy Hull thrives off the idea of self-obsession, and turns it into something wonderful. 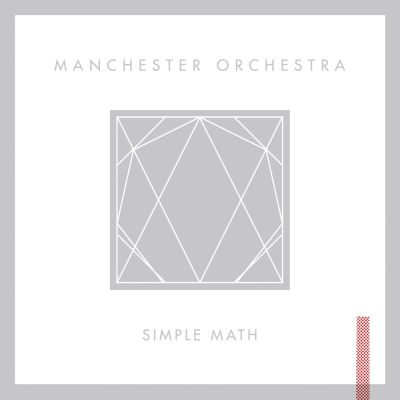 In the solemn opening track of ‘Deer’, with its honest and revealing lyrical flow, Hull starts out straight away admitting faults of his own; a theme that sticks throughout the album. Constantly questioning his own decisions and motives, Hull’s lyrics keep you hooked, listening for the next honest remark about his childhood or troubled relationships.

There is no doubt that Hull is a fantastic lyricist, he makes the most mundane of activities sound incredibly interesting, and grips you by the throat with the force of which he delivers his lines. The title track is beautifully haunting, and the tension seems to forever build up over an accomplished score. The band seems right at home playing over orchestral violins and piano, this something that is new to the band, but doesn’t detract from the signature Manchester Orchestra sound. The guitar work throughout ‘Simple Math’ is reminiscent of the band’s previous albums; this combined with Andy Hull’s harsh but brilliant vocal style, keep Manchester Orchestra firmly rooted in their own unique sound.

‘Simple Math’ can fool you every now and then, but don’t forget that at heart, this is still an indie rock album. Songs such as ‘Mighty’ and ‘April Fool’ keep it heavy and energetic, anchoring down the middle sections of the tracklisting. ‘Apprehension’ and ‘Leaky Breaks’ offer something calmer, but still offer that kick-in moment that will take your breath away.

This isn’t a perfect record, nor is it the album that will propel Manchester Orchestra into the mainstream, but it most certainly will get the band some much-deserved attention. It isn’t that any of the tracks are bad; it’s just that it takes a while to warm up. From a long-standing fans perspective, Manchester Orchestra can do no wrong and every track will pluck every single one of their heart strings, but the second half of the album will leave even a new listener in awe. ‘Simple Math’ is a step forward for Manchester Orchestra, and solidifies them as a band you should like before everyone else does.