It’s difficult to define a band who so easily slip between genres on just one album, let alone five. In their eleven years, Minus The Bear have been described as indie rock, progressive indie, math-rock and more. 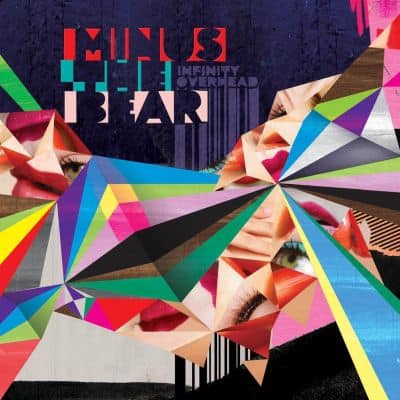 ‘Infinity Overhead’ is no easier to pin down than any of their others. It is certainly closer to their older styles than their most recent release, ‘Omni’, which was too different for some fans – they lost some, but they gained more, and most importantly learnt from their experiences.

With ‘Infinity Overhead’, they were reunited with founding member Matt Bales who produced ‘Planet Of Ice’ and ‘Menos El Oso’ and combined with British record label Big Scary Monsters have had the freedom to produce something that is more grown up, adult, and significantly darker while still staying true to what brought fans to them in the first place. As bassist Cory Murchy describes it – “We didn’t go anywhere, but we’re back.”

The opening track ‘Steel And Blood is a surprisingly upbeat-sounding song about an horrific car crash. Minus The Bear have always been fantastic at developing rich, textured music – so much so that often the lyrics are the last thing you are likely to hear, which makes their sound so interesting. With each listen you hear a little more of the sweet-yet-tragic lyrics, but it’s the heavy guitars, pop-like synths and poignant violins that make you really feel the tragedy of the young lovers and perhaps could be seen as an ode to their old music which so frequently betrayed adolescent ideals of going for drives in the summer and making love.

‘Diamond Lightning’, a single from the album, is sad but beautiful. This is a song to listen to as you like in a park alone on a summer day – shut your eyes and listen to the way the whining guitars seem to talk to each other, becoming more complex in the chorus before getting darker and more experimental throughout the rest of the album. Just when you think you’ve become comfortable with their style, Minus The Bear throw something new at you – glitchy synths, Oriental-sounding tapping and genuine raw emotion all add together to create an album which constantly reinvents itself in tone.

Towards the end of the album, the songs become darker, more aggressive and more confident. ‘Lonely Gun’, is one of their most disco-like songs and perhaps the best to sum up the album – it’s dark, confident, dancey and dirty-sounding but still incredibly complex and beautifully arranged. It’s also one of the darkest, lyrically speaking, seeming much more hopeless than usual, ending in a brief saxophone solo which leads perfectly into the final track, another dark-pop track with incredibly detailed guitar solos between the gritty, chugging sound of the verses and chorus.

They are not a band to trail off toward the end of their album – the lyrics are without hope and as it gets darker and more intense the listener isn’t left with a feeling of release but one of panicked energy. This is an album to be listened to on more than one occasion – several if possible – and as a whole. Every song is a block in the construction of this album which seems to symbolise a period of growing up for the band, of coming back home as someone different after a powerful journey.

‘Infinity Overhead’ will be released on August 28 through Big Scary Monsters and is available now for pre-order on iTunes.

For more information visit the official Minus The Bear website.