Dubstep wasn’t always a dirty word, unless you’re using the word “dirty” as a descriptor for basslines. Would you be surprised to hear that legendary BBC DJ John Peel was one of the genre’s earliest champions? Or that there’s room for spaciousness and subtlety in the genre, as demonstrated by the likes of Distance, Burial, and even James Blake? 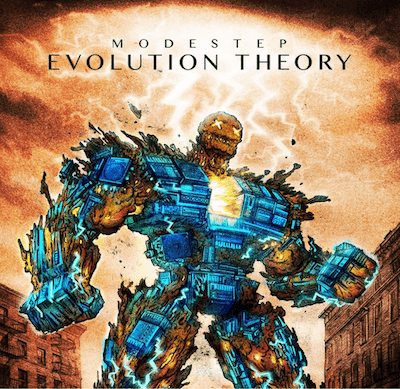 In recent years, however, dubstep has morphed into the more aggressive, hyperactive noise of “brostep”, pioneered by the likes of Rusko and spearheaded to mainstream acceptance by Skrillex. Would John Peel approve, or is he currently spinning in his grave? Let’s leave that up to you, the reader to decide.

So here we are in 2013, and Modestep are due to release their (somewhat delayed) debut record ‘Evolution Theory’. At this point, the dubstep/brostep sound has truly crossed over into the rock world – the band were asked to support Lostprophets on tour last year, and they also made a sizeable impact during the summer festival season, playing the likes of Download and Reading & Leeds.

Modestep’s acceptance into the scene does make some sense, however, as the band definitely display prominent metal influences – specifically, someone’s been listening to an awful lot of Rage Against The Machine. Amongst the ascending synth riffs and brutal, oscillating noise of ‘Show Me A Sign’ there’s a vicious guitar riff that feels like it’s straight out of the LA rap-rock group’s playgroup – the same trick turns up again on ‘Freedom’ (RATM even had a song called ‘Freedom’, coincidentally enough), a track that also features a Pendulum-style cinematic spoken word vocal. Speaking of Pendulum, ‘Leave My Mind’ feels like it’s taken straight from their playbook, picking up where the drum ‘n’ bass titans left off with its stadium-sized riffs and implacable beats.

To be fair to Modestep, there are nods to dubstep’s roots on title track ‘Evolution Theory’, which features four grime MCs reflecting on the music they grew up with and the evolution of grime and UK garage (Heartless Crew, Pay As U Go Cartel and So Solid Crew, anyone?) – the music evolves in parallel, starting with spacious, breathy vocals and laid-back two-step beats before bringing in the heavy guitar riffs and uncompromising dubstep synth stabs.

There’s also an attempt at social commentary here, but all it serves to prove is that WUB WUB WUB simply isn’t a very convincing medium for a protest song – particularly one called ‘Praying For Silence’. Opening with a sample of a newsreader reporting on the London riots, you can tell the track has good intentions – unfortunately it has little more to offer than vague platitudes and ear-searing bass. We can get those on countless other dance tracks, making the whole exercise feel a bit pointless.

Indeed, you could accuse Modestep’s two biggest hits ‘Sunlight’ and ‘Feel Good’ of being based around those two things, but the difference there is that they’re not purporting to be anything else but hands-in-the-air anthems, a job that they do most admirably. The slick, Nero-esque ‘Take It All’ and ‘Save The World’ are also highlights in this regard, while ‘Another Day’ features motifs that sound like a warped remix of some 16-bit video game classic.

Listening to fifteen tracks of this dubstep-rock hybrid at max intensity would certainly take its toll, so it’s a welcome relief when the band occasionally mix things up a bit. The uncharacteristically reflective ‘Time’ subverts the genre by putting a showy guitar breakdown where you’d expect the bass drop to be, and its 60s organ sounds and wailing guitar solos lend it more of a classic rock feel than a dubstep one. ‘To The Stars’ begins with an acoustic guitar of all things, which shouldn’t be at all noteworthy in a world over saturated with singer-songwriters, but it’s simply refreshing just to get a bit of a breather before the bass kicks in again.

There’s sometimes an air of misguided bravado about the whole brostep genre, and Modestep do fall into that trap on occasion here. “I can feel the bass and it’s making my nose bleed!” shouts an anonymous voice on ‘Bite The Hand’, as if that’s some sort of qualifier for having a good time. Surely that’d just be really annoying? Having random nosebleeds for no reason is pretty irritating, never mind bass-induced ones, and it doesn’t help matters that the song also features the record’s most obnoxious, Skrillex-aping blast of noise.

However, despite the above complaints, Modestep have done a pretty good job of achieving what they set out to do on ‘Evolution Theory’. The band are clearly aware that their music may be divisive, acknowledging on ‘Feel Good’ that they’re “making real music that may not be everyone’s taste”. Some might argue that this isn’t “real music”, whatever that even means these days, but let’s not get into that debate. If you like your dubstep loud, in your face, and with a side of crunchy metal riffs, then Modestep have got you covered – and if you don’t, there’s not really a whole lot else for you here.