Simply put, Nitzer Ebb’s ‘Industrial Complex’ is a real stormer. Right from the opening moments of ‘Promises’, the listener is pushed into a whirlpool of pure industrial punk with unrelenting beats, squelching electronic madness and Douglas McCarthy’s’ haunting vocals. The follow-up, ‘Once You Say’ has an equally addictive quality. It displays just how influential Ebb are to all walks of life within the industrial  and electronic scene – everyone from Nine Inch Nails to Depeche Mode and 16Volt (so really, anyone ever worth their wires) have name-checked the band for their skill and diversity. On this track, pop-style overtakes the coldwave edge of the opener and opens up the band to a new fanbase. 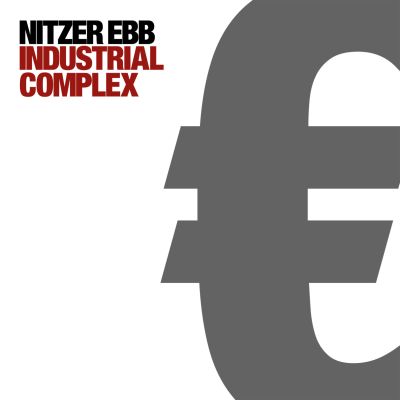 ‘Never Known’ strikes much harder with some intelligent drum work and haunting Tom Waits-esque vocals – it’s one of the strongest tracks on the album (taking into account the unusually heartfelt lyrics: ‘I came 2,000 miles for just one of your smiles’) and it really sets the blueprint for modern industrial rock – the acoustic instrumentation balances incredibly well with the blistering dark electro noise.

‘Going Away’ continues to explore the more personal themes of ‘Industrial Complex’ – there seems to be overriding ideas of isolation and the darker side of relationships on offer here – standout moments include the touching synth work and soft vocal tones. This is arguably the most sensitive track the group have written and for most Ebbheads it will be a welcome addition to this record.

This strong theme of relationships strikes again for ‘Hit You Back’, though this time it’s a proper electro stomper that strikes in all the right places (no pun intended), it incorporates the lighter side of the earlier tracks with the raw industrial sound that will always be associated with this cult act.

‘Payroll’ is definitely our standout track from the record – it’s almost Prodigy-esque in its venomous techno-punk delivery – this one’s going to be a live favourite and it should see strong rotation on any self-respecting DJ’s list – there’s tasty rock bits, dashes of EBM and unrelenting electronic, synth-drenched fury throughout. Nice.

Meanwhile, ‘Down On Your Knees’ slows things again – it’s a straight and true synthpop masterstroke that will burrow its way into your subconscious and stay there for days – it’s one of the more dancefloor-friendly tunes on the record. The next tune, ‘I Don’t Know You’ is about as close to sugary-sweet pop the Ebb will ever come and it’s definitely different to what many will expect – people might say it’s the disk’s weakest track but it really is open to interpretation and the band’s increasingly wide fanbase.

‘My Door Is Open’ again, is an honest and unadulterated foray into the underground with heavy-hitting and sharp electro-rock sounds while ‘I Am Undone’ is the ultimate industrial ballad (yes, it rivals anything NIN and Reznor have done) – it should go down a treat live, the keyboards are enchanting while the vocals portray a variety of emotions, laid upon a bed of strong beats.

‘Kiss Kiss Bang Bang’ presents another dip into the world of cyberpunk – it’s brutal and built for raccous and sweaty dance-offs. Electronic and acoustic percussion take presidence here while synths work very well and add a real sense of chaos and drive to the music.

The final offering on this is ‘Travelling’ and it’s one of the most experimental songs on here, while there’s an overriding pop sheen to this stuff, it’s still got the deep and dirty feel that will hook fans of everything from the aforementioned NIN to Gary Numan via The Cure. This is the real deal and without Nitzer Ebb industrial really would be a hollow genre. This album is about substance and diversity – it provides these things and offers a whole lot more. Nitzer Ebb rock harder than they have before, and they certainly take a more commercial turn than on previous outings but it’s all in the name of staying vibrant and original. Good work lads.