London synth quintet Portasound return this month with their follow-up to ‘The Second Renaissance’ EP, and a filmic sense of purpose. Released on Blood and Biscuits – the sort of ultra-cool DIY label that thrives on the talents of young left-field collectives – this collection of oddball pieces comes lovingly packaged in the kind of sleeve born to reside on a collector’s shelf. 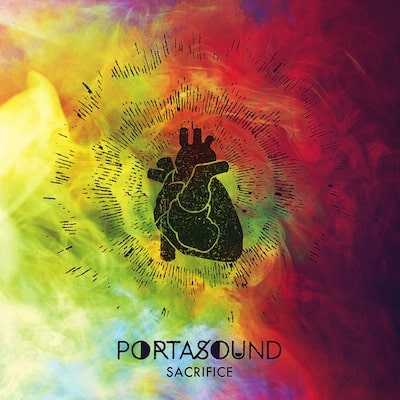 ‘Sacrifice’, in the band’s own words, was to carry “the atmosphere of some of our favourite dystopian films and novels with the energy of a live electronic band”. Within seconds, images of blaring lights, endless speeding tunnels, space exploration and Kingdom Come flash before you. There is a sense of ‘been here before’, of course, with Martin Ware-era Human League amongst others peddling similar – albeit poppier – works. In truth, however, this release is no throwback; with a polished sound and glorious stereo mix that bounces from ear to ear, this is thoroughly modern record.

Opener ‘Time Lost’ plots a voyage into the unknown, into psychedelic territories recalling everything from the Floyd’s ‘Interstellar Overdrive’ to Giorgio Moroder’s pioneering synth explorations; it is strange and amorphous, yet retains enough familiars to draw the strands together. The manic finale is as danceable as it gets, with James Dow’s incessant vocal phrases breaking before the sprawling ‘Procession’. Its initial march is entrancing, the off-beat drums set against a simple bass line and steadily building melodies. A sudden drop and things chance tack completely – fuzzed synth notes contort with minor-key guitar stabs as if from some unearthed dark-wave bootleg – it really is visual, watching some beautifully horrific scene unfold as you drift away into nothingness.

Third track ‘Furore’ is upbeat by comparison, yet is still rife with curve-balls – its stop-time middle-eight provides just enough variation to keep things interesting amidst the tunnels and flashing lights hurtling past. Coda ‘Ascension’ begins as a far, distant cousin of Tangerine Dream’s ‘Ricochet’, underscored by stark guitar shards into a far more unwieldy beast. Things really begin to take off and before long you’re leaving your headphones behind you and traversing the outer-reaches of your imagination, up and around the final frontiers and touching down again as the mix begins to fade.

Portasound have created something rather remarkable here – a 20 minute aural journey across the gulf of space, through J G Ballard’s dystopian futures and back again. Each of the four pieces has much to commend them, but ‘Sacrifice’ needs to be digested as a whole: a continuous, grinding cinematic adventure that will confound and intrigue with repeated listens. Making appearances across the country with Wave Machines and label mates Gallops, be sure to catch there travelling futurisms in a venue near you.