Leeds seems like a city where musical talent rarely goes to waste for long, and Stalking Horse is yet another example of that – Wu, the man behind the Stalking Horse moniker, was previously the frontman of Leeds four-piece This Et Al. When that group went their separate ways, he struck out on his own, and this May will see the release of his debut album ‘Specters’. 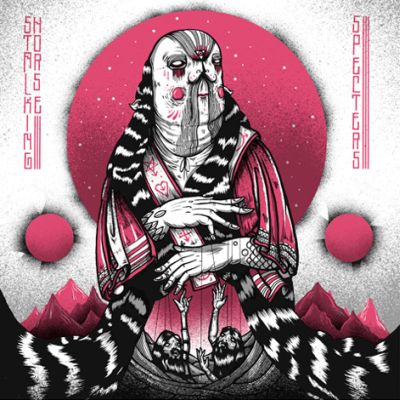 If I was going to compare Stalking Horse to one band, it would be Grammatics (another Leeds-based group who are now also sadly defunct). Not necessarily in a strictly sonic sense – though there a little of Owen Brinley in Wu’s tasteful falsetto, the similarity is most readily apparent in his refusal to stay in one place throughout the ten tracks of this album. And so the swing rhythms and hazy wall of noise present on ‘Key Strokes’ are very different to the sparkling keys and relentless guitar line of ’99 Stairs’, which are again distinct from the upbeat rhythm and mellow, echoing guitars of ‘Heathen Head, Howling Heart’.

That said, there are repeated motifs that tie these seemingly disparate songs together. Though they’re executed in a different manner in each song, looping arpeggios are key features of both ‘The Dawn Is Father To The Sun’ and ’99 Stairs’. Similarly, swelling guitars that have the air of a string section about them are another recurring them, appearing on the likes of ‘Key Strokes’ and ‘Little Rituals’. Indeed, no matter the instruments and ideas used in a given song, an impressive sense of atmosphere is present throughout the record.

With such a varied set of ideas on display, some will inevitably come off better than others. Mournful piano ballad ‘Mistress’ sees Wu’s vocals perhaps stray a little too far into histrionic territory, but floaty follow-up ‘Doctor A Heart’ is a perfect picture of restraint, slowly building up to its crescendo in a stately, dignified manner. The sheer variation also makes it difficult to pin down or pigeonhole Stalking Horse, which is never a bad thing. You might, if you squint hard enough, hear a little of ‘Total Life Forever’-era Foals on ‘The Creeps’, or a touch of Arcade Fire on ‘Heathen Head, Howling Heart’ – but these are merely fleeting observations, not tags to brand the entirety of the record with.

While ‘Specters’ is resolutely different throughout, the contrast between the two final tracks of the record is particularly stark. ‘Waterhole’ builds on a booming four-to-the-floor beat and menacing atmospherics, before additional guitars and pianos lend it a fresh sense of optimism about halfway through. On the other hand, ‘Lament’ is set to the sound of rain clattering on a roof as an ominous drumbeat leads a funeral march through a haunting soundscape. It’s always pleasing to see a project this varied and ambitious succeed, and Stalking Horse have absolutely done so with ‘Specters’ – a record that’s not only enjoyable, but deeply admirable as well.