For those of you who don’t remember Sunna. Cast your mind back to the year 2000. A Perfect Circle were touring with a virtually unknown support band from Bristol. Before they released their fantastic and varied début album ‘One Minute Science‘ which garnered positive reviews from much of the music press. They landed themselves with the job of opening for Smashing Pumpkins in 2000. A promising start it would seem, but by 2002 they dropped off the face of the earth and were all but completely forgotten. Seven years later, re-united and with what seems like more passion than ever, they have returned with their second album ‘Two Minute Terror‘. 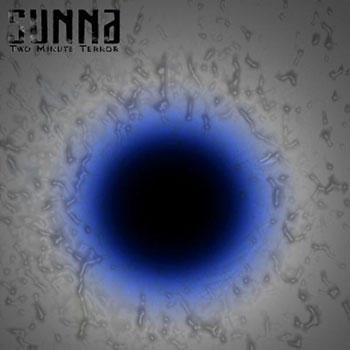 As soon the opening song ‘Spider‘ comes on you are treated to an aural experience. A perfectly designed and executed sonic blast that wouldn’t sound out of place on The Matrix soundtrack. It’s high-paced and adrenaline pumping and only slows down for a few seconds just to kick back in and make you want more.

After the first track rips you out of your seat and sends you down the motorway on a high speed chase. ‘One Of A Twin‘ slows the pace down – an infectious bass groove grasps you as electronic ambient noises float under the surface. Jon Harris‘ unique vocals glide over the top as the drum kicks in. There is no instantly recognisable hook to the song, but instead different sounds and instruments come in then disappear without a trace. You really do have to listen to it a few times to really appreciate every aspect of it it.

The cover of the 1980 David Bowie hit, ‘Ashes To Ashes‘ is something of a wild card here. It’s instantly recognisable by the opening riff. What Sunna attempts to do though, is make this their own song. Taking it to a lot deeper and darker levels. While still being a masterful track and making it sound fresh, it just doesn’t quite sound right compared to the original.

‘Had To Steal‘ is a song of two parts. Starting with a slow and sparse riff repeating a slow beautiful melody; with an acoustic guitar accompanying so perfectly and quietly that you might not even notice it. The music is reminiscent of Nine Inch Nails‘ ‘Ghosts‘ with its repeating riffs adding more and more layers leading to a crescendo of sound. Harris‘ vocals cut through the sound with some beautiful lyrics “I really wouldn’t want to be” repeating almost endlessly.

‘Empty‘ is easily the most radio friendly of all the tracks here. Sounding like some sort post-grunge mix of Chris Cornell, Alice in Chains and, just a hint of Nickelback. Opening with the line, “I wont hurt you, cause I know you can not feel me” with a very slick bassline. Although it does have very slow verses the chorus is bound to have everyone going crazy when they perform it live!

Ending with ‘Alice‘, a short track with only an acoustic guitar and vocals. This is the perfect end to the album. At only just over a minute-and-a-half long, it feels unfinished, but in such a way that it leaves you wanting more.

The thing about this album is, for the most part it’s not easy to dance to and its not going to have you moshing and headbanging. Instead this truly is music to completely lose yourself in. You find yourself rewarded the more you listen to it, discovering more melodies hidden quietly, here and there. What it attempts to be, and comes so close to achieving is a truly unique experience from beginning to end. Having crafted their own unique sound that is instantly recognisable as theirs, yet they aren’t afraid to make every song sound unique. Overall, this sound doesn’t so much break the mould, as create a new one. You will either love or loathe this album, but we can firmly say we loved it.

Sunna, after an album like this, don’t you dare disappear again!

For more information and to buy the album, visit the official website.