Metal saw its Industrial revolution during the late eighties and early nineties. Smelting steely riffs, distorted vocals and hypnotic synth lines, the new epoch manufactured a bleak, nihilistic vision of the future. The new dawn of metal was an instant commercial success, and its popularity catalysed a ground swell of crushingly heavy acts. Emerging thrash and death bands began to experiment with these powerful new tools, adding to the genre new depths and sonic possibilities. Among this new breed were the superbly destructive Fear Factory and lesser known Napalm Death and Obituary collaborative Meathook Seed… 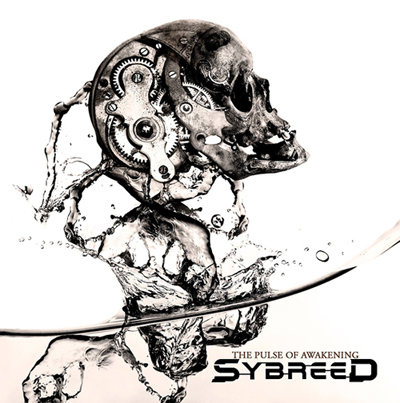 {ma id=B002N9MJSC&name=Sybreed – The Pulse Of Awakening}

While these bands painted darker, more apocalyptic horizons, there were other up and coming acts which toyed with more accessible, commercial sounds – cleaner vocals and emphasis on melody. With their lighter weight industrial pitch, bands like Spineshank and Static-X spread across MTV like a rash during the later part of the last decade.

On their new album ‘The Pulse Of Awakening’, Swiss electro thrashers Sybreed (Synthetic Breed) can be marked down as a half way point between the futuristic blast of Fear Factory and the melody driven commercial division. While the sound is welded tight with pneumatic blast beats and devastating riffs, it polished off with melodic chorus structures and waves of harmonising synth textures.

The first segment of the album embraces memorable tunes and user friendly metal. ‘A.E.O.N’ is a direct reference to Fear Factory’s ‘Obsolete’ era, with relentless double bass pedal and ethereal atmospherics. Benjamin ’s clean vocal performance, however, sounds like it has been spiked with helium, and after a few choruses, it becomes extremely irritating. He makes up for it with spurts of deathly throat raging, which more fittingly matches the muscle of the music.

‘Human Black Box’ recalls guitar hooks and melody lines from the hey-day of nu-metal. Although it pulses with dark undercurrents, its melodies are insubstantial and instantly forgettable. However, when Sybreed want to be brutal, they can be very, very brutal. ‘I am Ultra Violence’ takes the album down a darker, more pummelling and an altogether more frightening route. It explodes with the kind of precise devastating noise of Meshuggah, and is cut here and there with the sludgy, smacked up distortion that Ministry tailored.

Halfway through, the album’s pace relents. The band reveals a smoother edge on ‘In The Cold Light,’ paying homage to the 80’s gothic sounds that they were obviously groomed by as teenagers. Futuristic synths shimmer and pulse beneath the vocalist’s pleading, vocoded voice. It is slow and heavy, shot full of doom and gloom, like Killing Joke’s more morbid moments.

But the respite doesn’t last long. ‘Lucifer Effect’ shatters through with some In Flames-style riffing. As the chorus opens up with operatic synth layers and an ascending vocal hook, it appears that Sybreed can’t go beyond the conventions of the genre.

On the whole, that is all ‘The Pulse Of Awakening‘ is: a genre album. It will excite fans of Fear Factory, Soilwork and Meshuggah. Standing on its own, however, it will not make a dent in the Industrial scene.