Hailing from New Brunswick, NJ, The Gaslight Anthem return with their third album ‘American Slang’. Their style mixes elements of new wave punk with Motown influences and a splash of good ol’ rock n roll. Originating from the state that exported emotional, screamo giants Thursday, The Gaslight Anthem appear to stand right at the other end of the spectrum with their bouncy riffs and feel good energy. 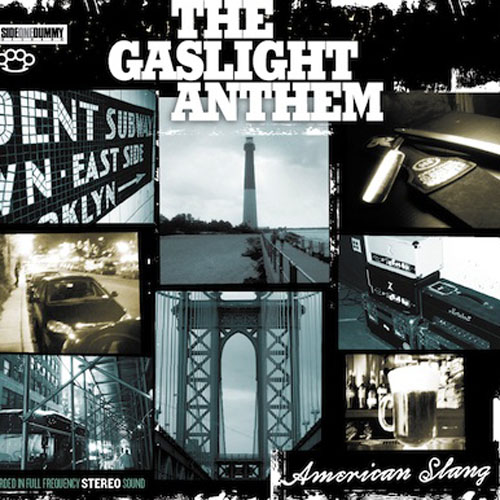 Opening with the title track, the bar for this album is quickly set, with vocalist Brian Fallon’s rasping voice singing about the Americana life set against energetic punk riffs.

Tracks like ‘The Queen of Lower Chelsea‘ and the penultimate ‘The Spirit Of Jazz’ have a weary, wistful mood which lurks behind the liveliness of The Gaslight Anthem’s performance. On tracks like the infectiously catchy ‘Orphans’ where Fallon tells us, “I can feel in my aging bones how the sun / and rain mixes up into the fountains where I drank my hero’s blood” and “My teenage heart packed all my misery baby / to fingertips that might ignite” as he examines long lost love on ‘Old Haunts’, he consistently showcases his talent for penning clever, edgy lyrics which somehow maintain the old school vibe his music evokes.

For the most part, each song on ‘American Slang‘ follows the same kind of pattern established on the first track, one ode to better days gone by merging into the next, until the final song, ‘We Did It When We Were Young’ disrupts the balance. Merely the title evokes feelings of nostalgia and introspection, but this song allows the subject matter to be exposed, rather than hidden, within the music. The Gaslight Anthem take us on a reflexive journey through the mistakes of youth over some sombre guitars and slow, sullen vocals as Fallon lays bear in husky tones “We were strangers many hours and I missed you for so long / I am older now and we did it when we were young“.

The Gaslight Anthem clearly have American grassroots guitar music firmly at their hearts, they were afterall joined by Bruce Springsteen on stage at Glastonbury 2009, and they have given their nostalgic passion a gritty, punk rock edge, creating a soulful yet simultaneously feel good album in ‘American Slang‘.