A début album often, some would say inevitably, leads the act on the verge of its big break to draw comparisons with artists who they take their inspiration from. 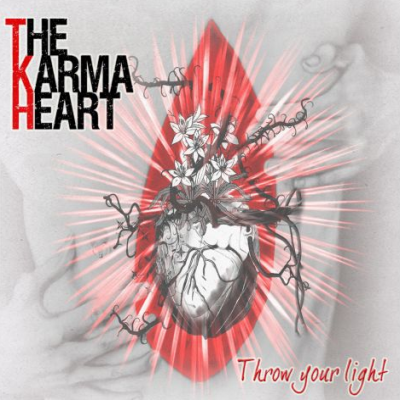 Newcastle’s The Karma Heart compare themselves to, among others, a more edgier British Paramore. Lead singer Jenn Cherene may share a similar shade of hair colour to Hayley Williams, but ‘Throw Your Light’ finds this leading lady delivering a more grounded, less dramatic pitch. The album kicks off with the punchy ‘The Fated’, where Graham Haskell’s chugging guitar chords establish a pattern which recurs throughout the eleven tracks and finely complements the passionate vocal performance of Cherene. All band members get their opportunity to steer the rhythm throughout; ‘Honest Child’ and ‘The Remedy’ offer showcases to Phil Bell’s stringent drums to come to the fore, while ‘Coming Undone’ brings Lee Tuck’s basslines to prominence.

The album’s opening tracks are certainly in the mould of classic rock anthem, following the tried-and-tested formula of sing-a-long choruses, riff-driven bridges and thundering crescendos; yet the quartet achieve this without pandering to excessive, extreme stereotypes and preconceptions.

As ‘Throw Your Light’ approaches its mid-way point, the band takes the mood down a notch with ‘The City’s A Desert’ and ‘Desire’, a brace of tender moments which allow time and space to value how the Karma Heart’s sound and words fuse together. ‘King Karma’ finds the band embracing a grunge-style beat reminiscent of early Smashing Pumpkins – reflected in the comparatively pessimistic tone of the lyrics. Indeed, Cherene’s vocal broaches a Billy Corgan-esque tone in near reverence. Yet, by the song’s conclusion, the song’s character has found the strength to overcome her oppressive partner: “Live for myself and not for you… your sticks and stones will not break me.”

The lyrics of empowerment and self-esteem reach their apex, aptly, in the closing track, ‘There’s Not a Star In The Sky Tonight’: “Know that I am thinking of you” being the last lingering nugget the band choose to leave us with. Overall, ‘Throw Your Light’ is a solid set which will strongly appeal to those who like their rock music the way it used to be – without irony and pastiche, with intensity and passion.