Guy Ritchie’s original Sherlock Holmes on paper, sounded like a terrible idea, turning Arthur Conan Doyle’s beloved detective into an action hero – it worked very well and was a critical and commercial success back in 2009. A sequel was obviously going to happen (the first film left us in no doubt of that) but blockbuster sequels are tricky to pull-off well, as more often than not they can be so full of jaw-dropping action scenes that they actually forget minor details like plot and character (see ‘Transformers 2’ and all of the ‘Pirates Of The Carribean’ sequels). It’s good to be able to report then, that while ‘A Game Of Shadows’ is full of such moments, Ritchie has crafted a sequel far better than his original, indeed, it is actually one of the finest Blockbusters that 2011 has seen. 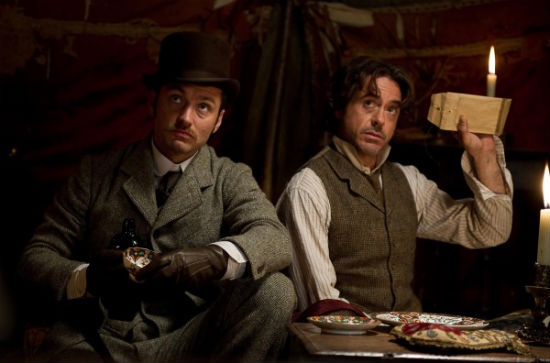 All the great aspects of the first film, including the outstanding art direction, the well used slow-motion, and terrifically entertaining buddy relationship between Law and Downey Jr are present and correct once again, yet here still, Ritchie has improved on his formula.

The first film suffered from a sluggish pace, its greatest failing was that it still clung to the idea of being a mystery film, yet the mystery in question was obvious and simple – it felt like too thin a plot spread over too long a running time. In the sequel Ritchie has remedied this, the pacing is fantastic, and he wisely plays down the mystery aspect and ramps up the action, and comedy along with it.

The story here is, if anything even simpler, Downey Jr’s Holmes is trying to track down arch-nemesis Professor Moriarty, a man he believes is responsible for bombings and murders that are happening all over the world. The setup is all very James Bond-esque in its clichéd approach, yet it works well given Ritchie’s take on the character and the franchise as a whole. Here, he really makes his action-orientated-take work delivering a satisfying production.

The first film’s biggest strength was always Holmes and Watson, and the aforementioned amusing on-screen chemistry between Downey Jr and Jude Law. In ‘…A Game Of Shadows’ this is played upon even more resulting some truly ridiculous scenes that manage to have us grinning from ear to ear. Downey Jr’s take on the character is never going to be a really faithful portrayal, he has more in common with Jack Sparrow than Doyle’s classic detective… yet he is still an amazingly entertaining presence and Law, again, is a great foil as Watson. Yet the real star of this film this time around is without a doubt Jared Harris as Moriarty.

The last film went to great lengths to build up Moriarty and so again the expectation is high. Given the tone of the movie we half expected him to be a pantomimic villain with no real menace. This is far from the case as Jared Harris plays the role with great subtlety and injects a genuine darkness into the scenes, in a way Mark Strong’s Lord Blackwood failed to do in the previous film. This is not the stereotypical darker sequel, which is why Moriarty is such an effective villain; he literally changes the whole feel of the production with a look or a gesture. The rivalry between Holmes and Moriarty is what the film is really about and their scenes together are brilliantly played out with admirable restraint.

Elsewhere Ritchie adopts the same old tricks including slow motion, cutting between past and present, but here he has managed to hone it perfectly. His action set pieces are spectacular, a shoot-out on a train, a chase scene through a dense forest with bullets and bombs flying all around but again they last just as long as they need to and don’t dwarf the characters or slow the pace down. The action scenes in the first movie while grand, lacked any real sense of danger; nothing seemed to really phase Holmes or Watson. Yet here they are out of their element and up against insurmountable odds. Most of the action involves them running away rather than fighting the good fight.

And for all its spectacular bravado, the film’s climax (and highlight) is a simple chess game between Moriarty and Holmes; this is much more played down and cerebral than we could expect and is all the better for it.

Are there any downsides? A few. While Ritchie is great with male bonding, he seems to struggle to make the most out of his female characters. Noomi Rapace’s knife-wielding gypsy fortune-teller is strongly introduced, but not really put to any useful purpose. She seems to exist solely as plot exposition. Rachel McAdams’ Irene Adler (who makes a return here) suffered a similar fate in the first one. Plus Stephen Fry as Mycroft is just well, Stephen Fry.

So, the light plot is still evident, as with the first one but, we find the whole thing so darn entertaining it’s never really an issue. Anyone wanting an accurate appraisal of Doyle’s Holmes would be better served by the BBC’s series, however if you want to watch a genuinely thrilling film then ‘…A Game Of Shadows’ is well worth investigating.