Fourteen Twentysix is essentially the alias for musician and vocalist, Chris Van der Linden, who hails from Eindhoven, Netherlands. His first full length album, ‘Lighttown Closure‘ is a continuation from the EP ‘Chromatic’, and continues to creatively express and reveal a dark period in the life of the artist. With the musical style described as “melancholic, lightly experimental rock” if you’re looking for a pick me up you’ll want to stick with your Journey ‘Greatest Hits’, but those looking for bleeding hearts and emotion may well have come to the right place. 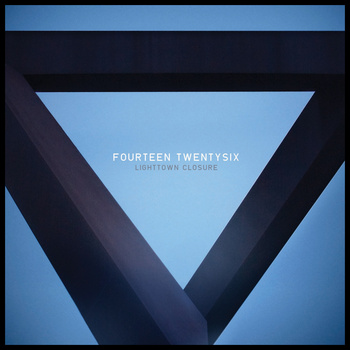 Following a popular trend, the opening is a short minimalist composition. ‘AM‘ is principally acoustic guitar, sparingly plucked against a background of ambient noise, it’s a very easy sound and a strong way to set the tone for the album. Towards the end of the piece we hear the first introductions of electronic ambience as well a few lines of vocal finishing the track and taking into the next.

‘After The Storm‘ leaves behind the raw sounds of the initial opening, with a multitude of instruments and sounds including traces of piano keys, strings and a nicely produced drum track. The vocals create a very catchy chorus, and contribute to a mood that isn’t exactly ecstatic, but nor is it too heavy, the balance is perfect. Mid-way a lot of the production drops away which is a nice effect, allowing the various components to build the mood back up, finishing the track with picked electric guitar over a pitched female vocal.

‘Closing Hours‘ continues to offer the same well produced sound though there are already worries that the tracks bear a little too much similarity. The chorus has a completely different feel however, and the structure is nicely broken up by another stripped away breakdown, with drums and guitar only, giving a nice studio effect. You can’t deny the sheer emotion the artist has poured into his music, while he may not have a technically strong voice, the feeling behind every line more than makes up for it.

It’s nice to hear some variation when ‘Gone Today‘ opens, not driven by guitar but by a simple, effective bass line, and it’s nice to hear some catchy lyrics bearing a bit more structure. Inevitably though, the mood of the music is tying all these songs together without much distinction between them, and it is a little same-ey and sadly, a little tedious at times. ‘Tonight I‘ follows a similar pattern, but some of the instruments used give the song an almost eastern feel at times, and hand beaten drums bring more diversity to the mix, but essentially the main elements of the song are the same. The structure of this song seems to lack a beginning middle or end and so you get the feeling it is limping on without a lot of purpose, in moments it feels more like a spoken-word story being told with musical backing.

As you come to the second half of the album the general feeling of the music becomes extremely solemn. ‘Signals In The Sky‘ comes in at over 8-minutes long, which unfortunately for the artist, does come across as slightly self indulgent. It isn’t until halfway through that a beat kicks in and gives things a bit more of a rhythm, but the last minute of the song is basically feedback, which you’re likely to skip before you reach the end.

There is very little more to say on the final three tracks, ‘Descending‘, ‘White Pain‘ and ‘Lashes‘, that hasn’t been said previously. They utilise the same elements, with the same vocal tone and instruments which is fine on the odd track, but as a whole album it is too much.

The first few songs are enjoyable tracks to plug in and take a walk with, but the second half will have you hanging your head looking for something to lift your mood. Fans of progressive music will be happy to listen to much of it, but even the most dedicated followers might find the album as a whole, quite an effort.