Any new project involving a musician as talented and accomplished as Trent Reznor is bound to set pulses racing. Already tagged as a “supergroup” How To Destroy Angels, Reznor’s latest incarnation also featuring his wife Mariqueen Maandig on vocals along with British composer and producer Atticus Ross released their debut EP via digital download from their website earlier this week. 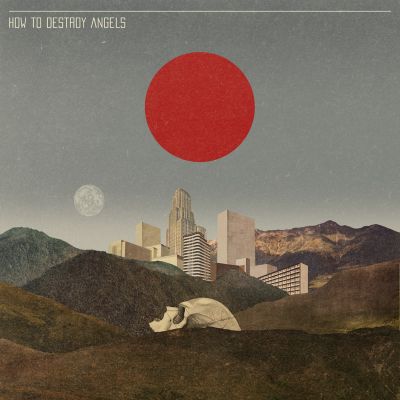 The album opens with ‘The Space In Between’ a juxtaposition of Maandig’s haunting vocals against a tinny backbeat. Imagine Morcheeba mixed with 80s-style electro-rock effects and you’re almost there. This gentle, chilled out vignette lulls us into a false sense of security which is quickly shattered as the second track ‘Parasite’ kicks in. This a punchy, rock song which opens up with screeching guitar feedback before the beat kicks in. If the female vocals were removed this track could sound like classic Nine Inch Nails. ‘Parasite’ really gets under the skin next, featuring the kind of musical rise and fall set against the steady beat of the drum machine that stamped success all over the anthemic ‘Head Like A Hole‘ some 20-years-ago.

Track three ‘Fur Lined’ has a strong alt-pop feel to it. It is the most straight forward track on the EP, with a clear and discernable verse, chorus, verse structure. It’s a catchy track with a slight decadent Portishead vibe creeping in toward the end. Fourth track ‘BBB’ which sees Maandig and Reznor whispering in unison, “Listen to the sound of my big black boots” repeatedly over heavier electronic effects in a way that closely resembles the sound of electro queen Peaches. The penultimate ‘The Believers’ does little to stand out on this EP though. Opening with some bizarre noises and sliding quickly into the familiar beats which permeate this release it evokes a sense of musicians becoming a little trigger happy with the effects buttons and samplers.

‘How To Destroy Angels’ closes with the beautiful ‘A Drowning’ a slow and evocative track that’s our standout. Despite the omnipresence of the industrial beats and the random interjections of electro effects, Maandig’s strong vocal performance carries this song away and sets it far apart from the other tracks. As she sings, “I don’t think I can save myself, I’m drowning here, Please, anyone” she consciously drags the listener down further and further into her melancholy.

This album is an amalgamation of standard industrial rock sound effects, delicate and haunting female vocals as well as poppy, catchy hooks. Given the undeniable scope of Trent Reznor’s musicianship ‘How To Destroy Angels’ probably isn’t as musically experimental as you might expect, but it is a welcome return to form and an interesting move by Reznor into darkwave territory.