Listening to the new album ‘Volatile Times’ by IAMX, you will be drawn in with their musical approach; it will affect your very core. With three massively successful studio albums already under their belt, there’s no way this album will be anything less than a complete sensation. Their genre, which many know as glam noir, is a sound that has been fashioned and perfected by the mastermind behind IAMX; Chris Corner (lead vocals, guitar, keys and drums). 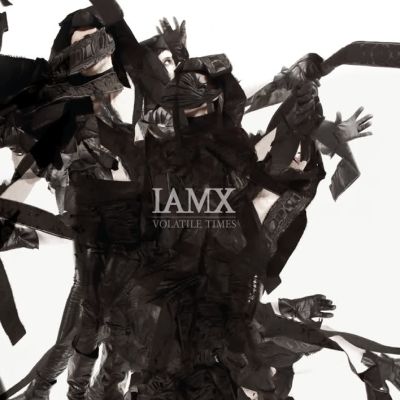 The first release of the album will be ‘Ghosts Of Utopia’ – a strong start. One of the darker tracks of the album, with eerie vocals and a ghostly beat which combine to make a spine-chilling melody. The album’s first track ‘I Salute You Christopher’, includes the attention-grabbing lyrics “I declare you as our King or Queen, depending on your mood”. With no drums, this track leaves you mainly to Corner’s stunning voice which is a beautiful beginning to the album. ‘Music People’ is definitely a track to play over and over, knowing that each play is nothing less than a hair-raising experience.

The title track, ‘Volatile Times’ truly doesn’t disappoint. Beginning with a quality build up, the chorus is an explosion of powerful music together with powerful lyrics making this track the excellence that it is. ‘Fire And Whispers’ is both track number four on the album and the title of IAMX’s latest tour. It has a paced rhythm, and intense lyrics throughout. This song is a perfect example of how listening to music can be an amazing activity in itself.

With somewhat of a fairground sound to it, ‘Bernadette’ is yet another particularly eerie song on the album. Though the thought of listening to a creepy carnival tune may not initially sound appealing, Corner somehow pulls it off very tastefully. The final track on the album is an excellent conclusion to this work of art. With feeling and sentiment plainly poured into both the music and the lyrics, ‘Oh Beautiful Town’ is incredibly poignant and moving.

The new album is flawless, with each of the 11 tracks giving you yet another reason to be part of the colossal fan base of IAMX whilst making ‘Volatile Times’ high up on your most played list. Rich, naked lyrics coupled with goose-bump- inducing vocals on top of serious, sensual beats make this electronic exposé an absolute must-have. Even the album artwork is remarkable!

Volatile Times is released on March 18.