Far from being satisfied with his Oscar win last year for ‘The Theory of Everything’, Eddie Redmayne has teamed up with ‘Les Miserables’ director Tom Hooper again to give himself another shot at getting the golden statuette. Having played a man who develops ALS, he takes on another challenging role, portraying a man whose realisation that he identifies as female comes from standing in as a model for his wife. The film is based on the true story of Einar and Gerda Wegener, and while writer Lucinda Coxon and Hooper embellish the story for the screen, it remains a powerful and engaging tale that manages to avoid pitfalls of mawkishness and give us believable characters, expertly played by our leads Redmayne and Alicia Vikander, who has shed her rising star moniker and become a star in her own right. 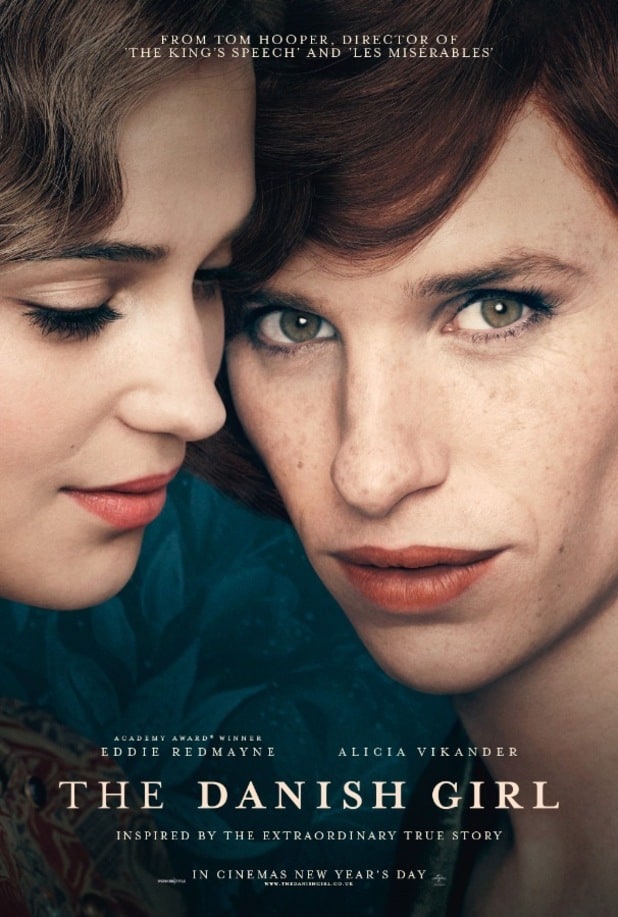 In typical Hooper style, the strengths of the film come from his fantastic eye for a great shot and towering performances by his lead performers, who elevate a script that could have fallen flat to a higher level. It’s their relationship, expertly captured by Hooper and cinematographer Danny Cohen, that comes to the very fore, the different directions the characters are pulled creating the most emotional moments. Redmayne is excellent at acting without speaking, utilising facial twitches to accentuate Einar’s turmoil as he realises that he wasn’t just pretending to be a woman for his wife’s painting, he was that woman. Lili, at first jokingly named by both him and Gerda, is who he identifies as, and we get the excellent juxtaposition of him truly becoming who he feels he should be while his wife watches the man she loved slip away.

Hooper manages to access the humanity of the story, taking us through the difficulties faced by both main characters, primarily in coming to terms with Lili’s decision, and also in overcoming a society that shuns such things and thus seeks to ‘cure’ those who feel trapped in the wrong gender. Rather than truly reaching for the nitty gritty aspects of these issues, Hooper prefers to focus on interactions, giving us glimpses in to the world of our main characters. It’s a tactic that works because of how effectively he makes it resonate. Vikander more than holds her own against Redmayne, delivering many of the most powerful lines and giving the story that edge it required to be more powerful. It’s her tale that makes the film, her struggle that we go through with her directly, while we only see Einar’s desperate struggle from the outside. The film has been criticised for this, but that change is no less effective for it, Einar’s determination and resolve against all the odds is both heartbreaking and triumphant, and the support shown by Vikander’s Gerda makes it more so.

The film does have its flaws. Matthias Schoenaerts’ character feels forced in to the story and doesn’t really accomplish anything, which is a shame because Schoenaerts has proven himself to be a good actor, and when the film drifts away from the central relationship between Einar/Lili and Gerda in the close confines of their apartment we are taken out of the story. Hooper’s directorial style, which is so effective when focusing on the faces of its characters, suddenly feels cold when confronted with open spaces, like we’re watching a scenic montage, which while by no means unpleasant, does serve to distract from the tale. Ultimately though, ‘The Danish Girl’ is an effective and emotionally powerful tale that deserved to be told, even if it missed a few opportunities and could have done with some better editing work.