Courtney Love returns with a new band but undiminished spirit. Hole have always been a polarizing proposition for many, but no matter what people think about their music, Hole would of course be nothing without Courtney Love as their frontwoman. But is the inverse true about the band? Can she justify resurrecting the moniker and reclaiming the songs with a line-up that could be her children? For the first of three UK dates, this seemed to be the question on people’s lips, and the mixture of anticipation and doubt palpable in the Glasgow crowd marks perhaps the first time her own fans have been as divided as they traditionally are from her detractors. 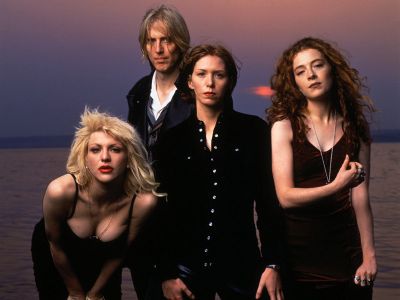 We need not worry. Tonight is probably the most defiant and dominant Courtney we’ve seen yet. Strikingly tall and still possessing a wild allure a million miles from the pap-pics she usually falls victim to, Ms. Love owns the stage, and her audience with it. While it would have been nice to welcome back her previous bandmates, it actually makes sense for her to be surrounded by such a non-descript new crew and with them, she puts on a grand show.

This much is clear from the opening chords of ‘Pretty On The Inside’, the dirge rising and swelling as her voice flipped from that familiar drawl to the startling banshee howls that still raise hackles and guarantee goose-bumps. Barely stopping for breath as the band slip into a ramshackle but relevant cover of ‘Sympathy For The Devil’, Love seems genuinely pleased to be here. Tonight, Hole fully confirms something she has repeatedly stated in the media: that she may be a horrible celebrity, but she’s an amazing rock star.

The initial wave of excitement is still evident as recent comeback single ‘Skinny Little Bitch’ begins, the band finding its feet with its own new material. Simple but forceful guitars replace Eric Erlandson’s more elaborate and textured strummings, and a more muscular drumming style was apparent in place of Patty Schemel’s deft rhythms. Perhaps the presence most sorely missed was Melissa Auf Der Maur’s, not just for the more traditional beauty she so effortlessly brings in contrast to Courtney, but for her softening backing harmonies. Of course, Hole have always been a revolving door, with Love and Erlandson in the centre, but it wouldn’t hurt if his replacement and chief new songwriter Micko Larrikin could add a bit more of his own persona, even just in the backing vocal department. Especially since he looks like his voice has barely broken.

This, combined with the venue’s notoriously muddy sound and a couple of relatively underwhelming new songs could have been the death knell for a lesser band leader, but Courtney is having none of it. She takes evident delight in regaling the crowd between and sometimes during songs with everything from lyric explanations (‘Awful’ revealed as a response to a doomed love affair with Gavin Rossdale; ‘How Dirty Girls Get Clean’ described as a PJ Harvey tribute and rehab reflection) to what seems like a genuine appreciation for her Glasgow fans. All this banter serves as a reminder of what many forget: that Love is a genuine legend in her own right, a survivor who serves up her trauma for both our own edification and her own catharsis. She is on genuinely delightful form, showing unbridled emotion one minute and good-humoured self-deprecation the next. The ghost of Kurt no longer seems to linger over her or her art, no longer threatens to obscure her direct, confessional lyrics the way his meanings could sometimes be obscured by his own expression of them. Naturally, this also means that some of Love’s new lyrics come over as a little shallow and self-pitying – songs addressing God always seem as safe as they are silly – but her commitment to the material and the integrity of her performance is undeniable.

In a set that ran to 30-odd songs and over two hours, false starts, audience interaction and plain old fu**-ups are all part of the show. Surprisingly, the album ‘Celebrity Skin’ is represented more than its predecessor, ‘Live Through This’. It’s a wee bit of a shame not to hear more of her classic 1994 offering, being as pivotal and poignant as it is. The more polished and poppy later material does sound surprisingly robust live though, with a heart-rending ‘Dying’ and totally punishing ‘Reasons To Be Beautiful’ going down a storm. However, ‘Miss World’, ‘Violet’, ‘Asking For It’ and ‘Doll Parts’ are un-doubted highlights of the whole evening, their mix of vitriol and emotion remains un-diminished in the 16-plus years since their recording, despite Courtney’s own reservations about the popularity of the latter song and her obvious attachment to the new material.

The gig hasn’t sold out tonight but if Courtney can keep up this charm offensive and level of intensity, you can bet her former hard-earned reputation as a formidable live presence will return along with her fans. Hopefully the band will hit its stride with more experience, and the sets can reflect her 20-year career in a more balanced fashion (classic B-sides like ‘Drown Soda’ and ‘Beautiful Son’ would be preferable to indulgent covers of classic songs she’s never even recorded before and probably can’t do justice), but for now the syrup and stodge of her solo effort ‘America’s Sweetheart’ seems like a distant memory. Ears will still be ringing, hearts racing and smiles sneaking up on their owners for days to come. And Courtney will hopefully be feeling the love she gives to her audience returned to her in spades.