Infest has been advertised as the UK’s leading alternative-electronic music festival, but it seems to us, and to the individuals it draws, to be a lot more. Why? Well, the event has become a home away from home for people of like-minds, wardrobes, and of course, musical tastes. It always amazes us to see how music can bind people from different eras and backgrounds; here is no different. In this review, we will share our entire Infest experience, from the accommodation to bands, giving you an in-depth guide to a festival you don’t want to miss. 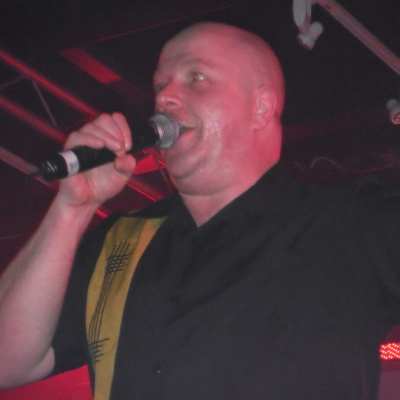 THE VENUE AND ACCOMMODATION

Infest takes place in the Student Union of Bradford University. With a decent-sized stage, dancefloor, three bars (yay!), plenty of seating, pool tables, a cash machine, food tent, patio area and extra rooms for traders, the space is ideal for hosting this all-inclusive event. During the day, we are free to wander around the various stalls, which sells a wide variety of gorgeous and kinky clothing, jewelry, dreads and other wonderful alternative accessories. We are also able to make ourselves comfortable outside on the grass (or on benches, as our “restrictive” PVC clothing allows), where the sun is shining with an alcoholic beverage in-hand, and we are surrounded by new friends.

Bands start from 4pm and run on to midnight each day, after which there are DJs until 3am. Though, if you aren’t ready for bed once those finish, there are after-parties that can be found and invaded, some of which take place at the university accommodation; which is probably the best place to stay. For your precious pennies, you receive a room, in which two people can stay, en suit, and a shared kitchen. Though, no bedding or kitchen appliances are included. This is not a big deal, and is far better than sleeping in a tent! Admittedly, because of the after-parties, and other drunken shenanigans, a reasonable amount of noise emanates from various areas throughout the night, morning, and through most of the next day, but do not fear! There is a quiet room option when booking. Otherwise, packing a pair of ear-plugs, (just incase) will not hurt. The room we have is spacious, with a double-bed, draws, wardrobe (hangers not included), a chair and excellent-sized desk, though be warned, some rooms only have single beds, and there doesn’t seem to be a difference in price depending on what size of bed you get, which is unfortunate.

Going to a large-scale festival like this can be pretty damn intimidating, especially if you have never been before, and don’t know many people. With everyone striving to look their best; laced-up, hair and make-up immaculate, towering over you in shoes that make your shins quiver, adorned in all sorts of trinkets and shiny bits, it wouldn’t be surprising if you felt a bit small; irrespective of your size. We rapidly learn, that these followers of the cyber-industrial scene are not what they seem at first-glance. Laser beams do not shoot from their eyeballs, and we are not incinerated on-site for attempting to make contact. Instead, they are some of the most friendly, laid back and welcoming people we have ever met, who share their alcohol (in order to save themselves), and take the time to sit and drunkenly converse. Don’t get us wrong, we did not meet all of them, and there are probably some pretentious individuals with their heads crammed so far up their bums that their brains have rotted from the smell of their own poo (just sayin’), but the world is filled with these types of people. The most important thing to remember is that we are all just people, no better or worse than anyone else; just different. Going to a place like this, you are bound to meet people with similar interests, because you already have at least one; the music, the scene or the style! Even if you don’t know many people on your arrival, we guarantee that you will depart knowing a great many more.

Upon first listen, Uturns appear to have an interesting sound, with gritty industrial beats, dirty synths; integrated with a more defining image than your average start-up band. A flurry of fans and faces adorned with intricate masks cannot not hide the act’s abundant lack of “oomph!” – whiney, and at times off-key vocals, paired with a very simplistic beat and repetitive lyrics give Uturns no defining musical characteristics. What this band really needs now is more energy! Revive your apathetic vocals with some attitude, and slice in a couple more layers for a richer, fuller sound. Mix up the beat, and give us something to dance to!

With energetic, pounding beats, and a level of variation the floor had been lacking before, Code 64, at kick-off, appear to be what the hordes of infesters have been craving to get their platforms a’pumping. Though, after an abundance of “technical difficulties”, it starts to seem as if we have been forsaken once again. This becomes more apparent as soon as the painfully flat, off-key vocals make a return to the floor and scatter the now less-than-eager clubbers, which is a shame, because we know the band have been eagerly anticipated by some. We however, are not able to gather our spirits and brave dancing after this, but there are those who manage to somehow overlook the vocals and hone into the beauty of the music. Code 64 does have something there, in its layers of delicate-yet-harsh sound; it will just take a voice of more skill to actualise this band’s potential.

As the first wave of tortured vocals and hardcore beats crash against the expectant crowd, it is clear that this is what we have all been waiting for. Within moments of Tactical Sekt taking the stage, the atmosphere is energized; alive with heavy grinding and fist-pumping. Screams and shouts from fans resonate as the band give us something worth our sweat. Crammed together as we dance, taken hold by the extreme bass-line, and encouragement from the band, we keep our bodies rocking and fists held high. To our delight, they play all of the fan-favorites (we dig ‘4 Steps To Dysfunction’), and give the eager crowd an encore, which only heightens our enjoyment. The only aspect of their performance we think could be improved on however, is that some of the intricacy that makes Tactical Sekt so awesome is lost among the distortion, but this is only a minor criticism and we think what they may lack in one area, they definitely make up for with their overall presence. 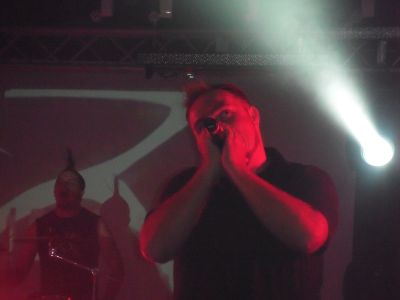 Having never heard of Alien Vampires, and with a hangover blossoming, we fear the worst for this set, but after a few seconds, every doubt is shaken out of us, partly by their aggressive, distorted rhythm, but also our uncontrollable desire to dance! Alien Vampires draw the crowd indoors from beneath the warm sun, packing the floor with a thrashing of limbs and rising of spirits as the beats soar and overtake. As well as sounding completely mental and promoting the best stage show we see all weekend, they also really look the part! We don’t think any of the other bands compare to Alien Vampires aesthetically; tattooed flesh exposed and cyber dreads in place, they certainly belong here as industrial’s “sexy bogeymen”!

Regardless of what those surrounding us say, we think that Hocico give a rather bland and disappointing performance. There are those that sing their praises, but we will not. There gets to a point here where we really don’t feel inspired to listen to them, let alone dance. There is no real “rise and fall” sensation to the music, just the same monotonous blast of sound emanating from the stage. Compared to the other bands we have praised here, Hocico simply lack energy! We are genuinely confused about how they can sound so great on their albums and yet fail so badly live? Thoughts? Comments? Hate mail? 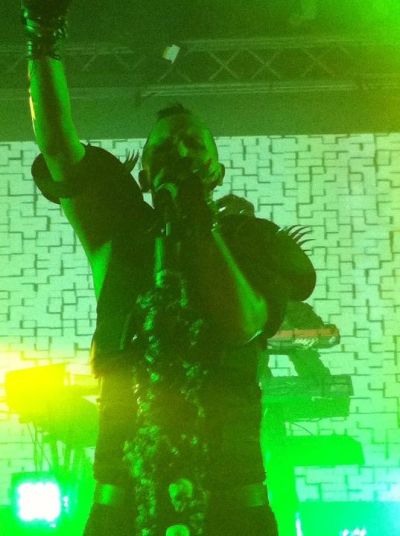 Mind.In.A.Box definitely make up for their unassuming appearance (t-shirt and trousers) by enveloping us in their intricate and uplifting melodies. Though some of the songs are simpler and lighter in style compared to the other more EBM and harsh-electro-influenced acts, less is certainly more, giving an air of delicacy and transcendence, lifting spirits as the music caresses us, crawling under our skin and into our souls (deep stuff, Megan… – ed). A heavy instrumental aspect and various vocal effects give Mind.In.A.Box an additional dimension, introducing a whole new pace and tone, which overtakes our senses. We are a little disappointed that there is no attempt at an encore though; we think this would have perfectly rounded-up the performance. 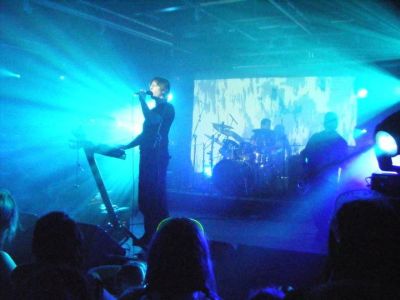 As far as we are concerned, VNV Nation is the pinnacle of our time at Infest. Their performance is the most emotionally intense musical experience we have ever encountered (at an industrial show, anyhow…), perhaps because on this night, Ronan Harris and his band give us more than music, more than the notes and lyrics that strike and resonate some place deep inside of us. It is hope, acceptance, peace, and perhaps faith that they give us, the reassurance that we are all beautiful in different ways and do not need to change in order to “fit in” to some nonexistent “ideal”. It is this that successfully brings tears to the eyes of many of the people surrounding us. For everything we give in response, they replace and send spiraling back at us, and as they do, it is clear that they are as genuinely touched.

Being at Infest has made us become more aware of something, and it is that music can now be translated as more than just an auditory experience, it has become, in some way, spiritual. Where people once gathered around altars, we gather round stages, instead of priests, we have musicians. We are godless children, who have found a new place to worship, but at the same time, we can be free within this environment championing alternative and electro sounds to enjoy being who we are [again, proper deep! – ed]. Infest is a place for similar people to gather and enjoy being individuals. The music gives us a reason to go, but the people, provide a great reason to come back again.