In town to celebrate 25 years of “conceptual continuity” as well as new album ‘Blitz’, KMFDM are, yep, you’ve guessed, doing it again. Before we bear witness to KMFDM’s ultra-heavy beat, London boys (and gal) Alterred get their chance to unleash merry Hell. 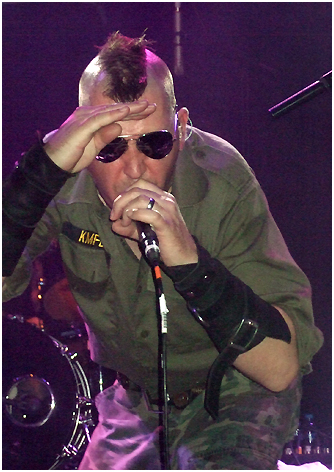 Dressed to oppress and led by ringmaster Mikey in Heath Ledger/Joker garb, Alterred open with the full-on psychodrama of ‘Emily‘, its tortured soul ripped straight from the mind of Tim Burton and given beautiful, fragile flesh. As a be-goggled engineer attempts to fix a wind-up doll (no, really), Alterred‘s theatrical elements take one step closer to becoming a fully realised element of their show. Previous shows with London After Midnight and a notable set at top London club Antichrist have enabled the band to streamline their set resulting in an amphetamine rush of raw energy that never falters once as they storm through ‘Predator‘ and ‘Nothing Less Than Violence‘. It’s EBM, Jim, but not as we know it, Mikey’s RAWK vocals firmly grounding their sound to provide something a lot more substantial than most bands have to offer. As Alterred bid farewell with ‘Sex, Death Or Money‘ and the living doll has her wind-up mechanism torn apart by a passing mental patient (again, really), the gift of retrospection will illustrate this to be one of the evenings highlights.

The baffling inclusion of Trauma Pet on the bill is, by far, the biggest faux pas of the night; a band so anodyne they make Republica sound like Cannibal Corpse, their set bears little resemblance to anything other than some kind of musical coma. Smelling salts of the cider variety assist vaguely in helping the next half hour pass as uneventfully as possible before the opening notes of KMFDM‘s bombastic ‘D.I.Y.‘ immediately shakes the audience from their apathy. Led, as always, by Sasha Konietzko and Lucia Cifarelli, KMFDM have gained a stable backdrop of musicians in guitarists Steve White and Jules Hodgson, and drummer Andy Selway, but it’s perhaps this stability that has resulted in a less experimental, more balls-out, metal sound when it comes to live shows. Awesome for when they’re blazing through jackhammer belters like ‘Son Of A Gun‘ and ‘Drug Against War‘, perfectly acceptable when it comes to the sturdy riffs of ‘WWIII‘ and ‘Hau Ruck‘, but after a while it all veers somewhat close to the one-dimensional and leaves them nowhere to go other than making ‘Godlike‘ sound like it’s been performed by Slayer. Which, I’m sure, was never the original intention. Or was it? Damn you post-modernism! And whilst I may have been the toughest critic to sate, most folks appeared to have a stonkingly good time and even a miserable fucker like myself can appreciate that ‘Megalomaniac‘ was, by far, KMFDM‘s finest moment of the night.
For more information visit the band’s Myspace. 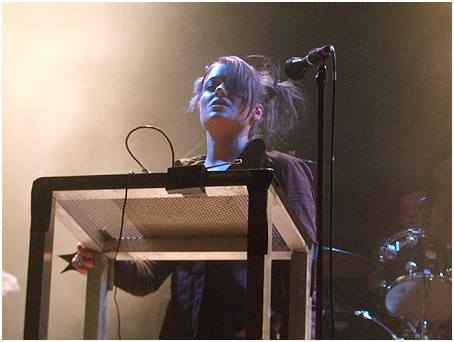 *All images copyright Nemesis To Go.