If, when you hear the word “festival”, your first thoughts go to mud, loo roll, bad food and huge crowds, then you’ve never been to 2000Trees. 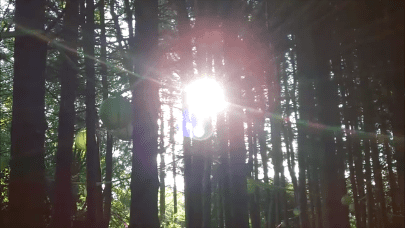 Hidden in the Cotswold countryside, 2000Trees is a small festival for alternative and independent music. With acts including Frightened Rabbit, Public Service Broadcasting, The Bronx, Band of Skulls, Blood Red Shoes, Jamie Lenman, Nordic Giants and Three Trapped Tigers, the event delivers a range of thrashy and folky music to the friendliest crowd in the world* (*probably).

Originally set up by a group of friends who were tired of the commercialism of larger music festivals, 2000Trees is all about the independent movement, stretching even to suppliers, with the infamous local Badgers Bottom cider drunk by the gallon. In its eighth year, the sunny summer backdrop was perfect: balmy nights allowed for revellers to stay out at the silent discos and secret forest sessions until the wee hours of the morning. 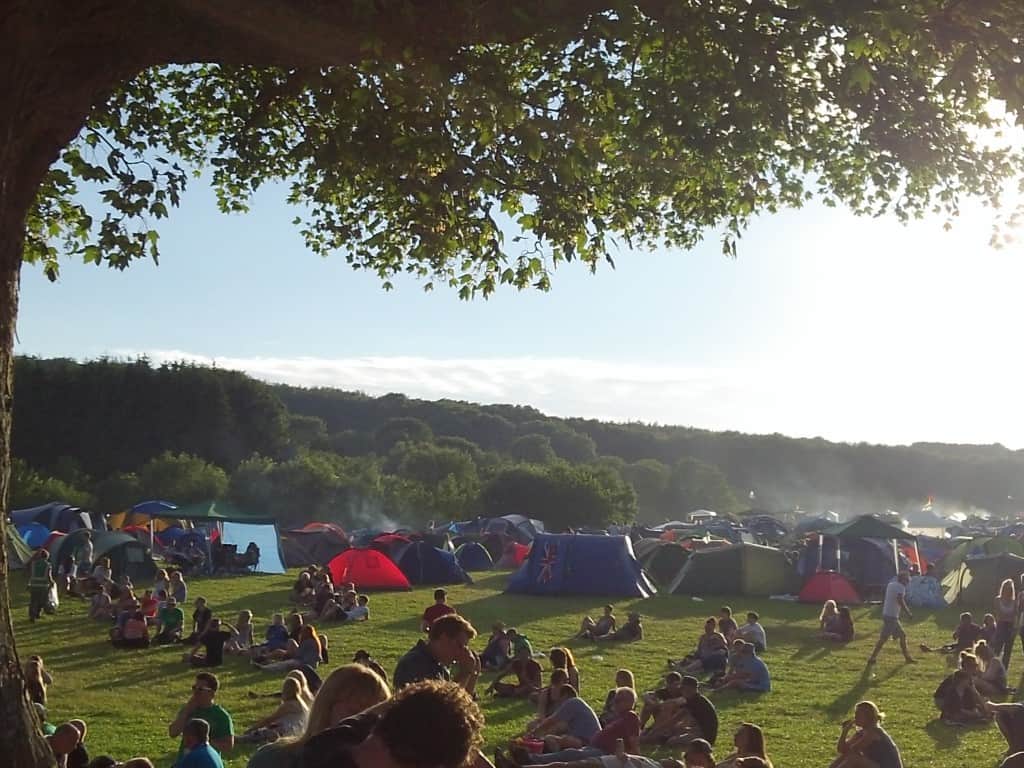 Four stages across three days has brilliantly planned staggered stage times to avoid as many clashes as possible. Centred around one big tree (the irony), the small site meant it was easy to get from one stage to the next, yet there wasn’t any sound overspill between the two closest stages, The Cave and The Axiom. The main stage, in a field slightly further down, held the full festival capacity – making for a spectacular sight for headliners Band of Skulls and Frightened Rabbit in particular.

That’s the overview – so what did each day’s delights deliver?

A special line up for the early birds, Thursday night is reserved for previous acts of 2000Trees who have proven to be particularly popular. This year, a swansong from Dan le sac vs Scroobius Pip is preceded by a heady line up which included Oxygen Thief, Jonny Foreigner and Gnarwolves.

Soundsphere spends the earlier part of the evening in true festival tradition of wrestling with a tent and then scoping out the entirety of the site – which, it is discovered, can be walked end-to-end in under fifteen minutes. Back at The Cave and embeveraged with local apple juice, Oxygen Thief provides a soundtrack to get revellers in the mood, discordant acoustic mixing with distortion and drums sett the scene for the upcoming heavier acts.

The iconic sounds of Gnarwolves not so much drifts past as wilfully assaults the ears of passers-by – but in this world of heavy beats and many, many guitars, that’s a direct compliment. Big guitars, big voices, and big drums already in the running for Loudest Of 2000Trees, Gnarwolves deliver a set fast and furious enough to feel exhausted just watching. 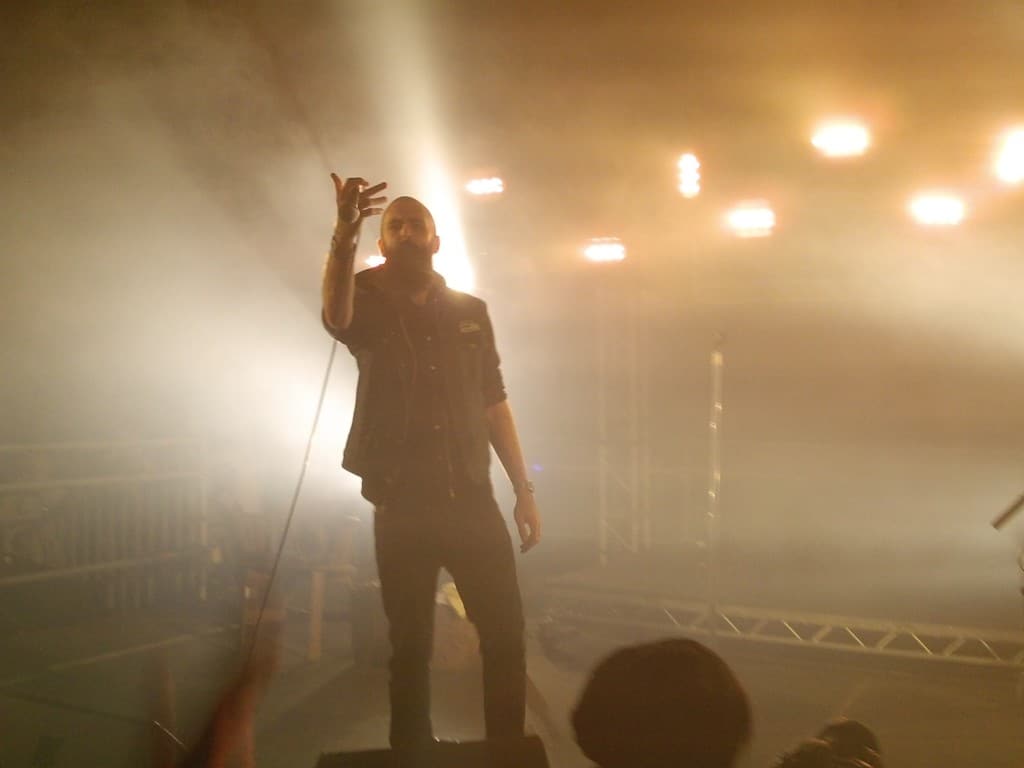 The highlight of the Thursday night, Dan le sac vs Scroobius Pip, has every single early bird jumping in the pit. A unique mix of spoken word, rap, hip-hop and the musical stylings of Dan le sac, this duo engage with the audience on a personal level, with hands in the air for every track, and every voice sings back to the poet (and XFM DJ) as he pulls out all the stops for ‘You Will See Me’ and ‘Gold Teeth’. Angry, political, satirical and split-second perfect, Pip ponders over le sac’s tracks with gusto. As one of the last few performances of this duo, Soundsphere are chuffed to be front row (and took the pit injuries in good faith – worth it).

Waking up at 6am is not the festival norm, but with bright sunshine already heating up the tents, Soundsphere manages to escape to the forest sessions area to cool down and chat with other early risers about the highlights and bands of interest coming up later in the day. 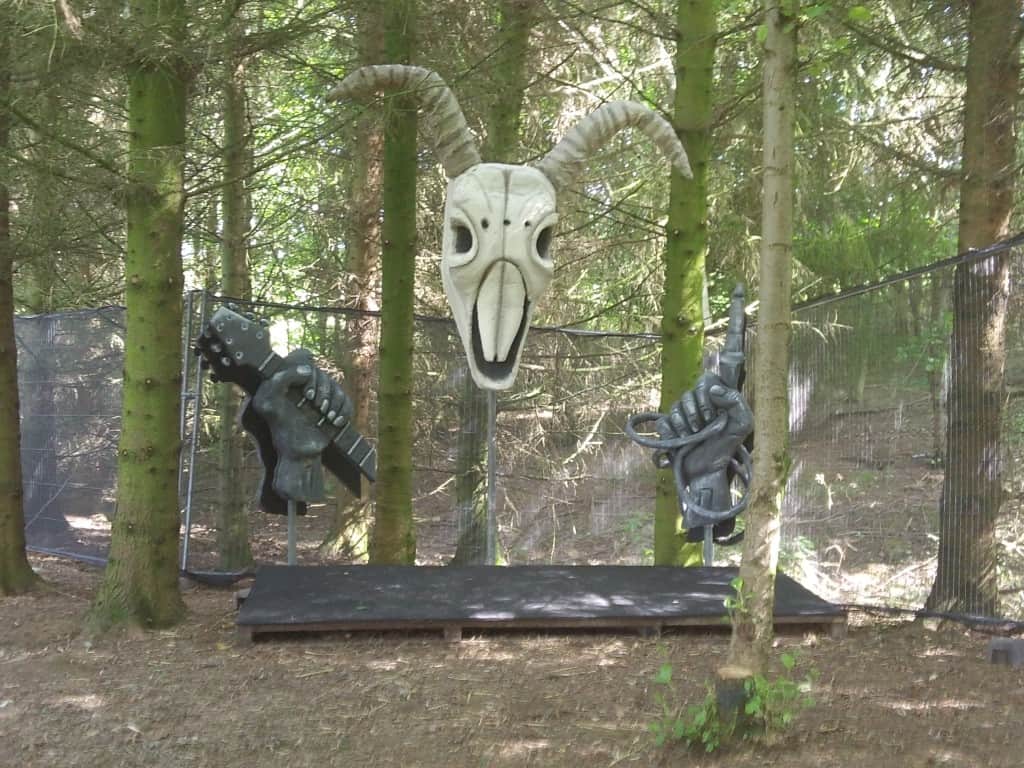 The secret forest stage in Room 7…

When the urge for coffee and pig products becomes too much, we unsling from a hammock and trundle to the main hub. First musical stop of the day: hardcore St Pierre Snake Invasion at The Cave. Loud is the first word that springs to mind, followed by “really good”. Unapologetic punk guitars throw down melodic clashed riffs while vocals peal forth. Blues-inspired undertones flex underneath screamed lyrics in a return to true punk rock form. It certainly wakes everyone up.

The Cave becomes a favourite, with intense duo God Damn taking the stage a little later on. It’s difficult to describe God Damn: the heavy bubbling influences of Nirvana, Black Sabbath and Smashing Pumpkins ride through almost pop-based hooks like those of the Black Keys. Enthusiasm and good noise is the overriding impression of the set, which feels too short for their full potential.

After disappearing for some secret artist interviews (watch this space!) Soundsphere pops by The Axiom for Nordic Giants. Not entirely sure what is witnessed, an audio-visual bombardment is cemented by two musicians dressed as some kind of tribal leaders, feathers and bones abound. After the soundscape, accompanied by short films, everyone leaves the tent a bit confused, but in agreement they enjoyed… whatever it was that just happened.

Trash Talk are the next stop. A crazy, crazy pit in the entire tent, the crowd is whipped to a whirligig around vocalist Lee Spielman while fast hardcore drums and guitar battle it out to win the volume game. Intense, energetic and definitely an experience, Trash Talk are not ones for the faint-hearted.

But then, oh then… then comes The Bronx. Painted like a tiger, Matt Caughthran leaps up onto the barrier from the first few moments and the energy continues to rise. Heavy clash drums and smart lyrics accompany his run into the audience, where nobody is safe from crowdsurfers. High octane and addictive, The Bronx – nothing like their Mariachi alter ego – bring the intensity 2000Trees didn’t know it was missing. 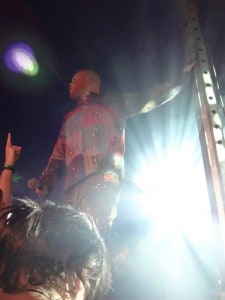 Topping off live acts on Friday are headliners, Band Of Skulls. This classic rocknroll band bring catchy hooks with atmospheric riffs to the fore. The moody, laid-back style perfectly compliments the higher energy sets from earlier in the day, and the full main arena bounces to tracks that would be just as at home on a modern-day MP3 player or vinyl back in the 1960s.

Next, Soundsphere are introduced to the musical tongue-in-cheek of Thrill Collins, a skiffle band known for pop covers and epic length medleys. With the entire tent singing along to Fresh Prince of Bel Air, the evening revelry kicked off with crowdsurfing to the Dirty Dancing soundtrack. Yeah, it’s that kind of night.

The silent disco takes place on Friday and Saturday nights, because eleven hours of music each day is just not enough for hardcore festival goers. With discos in three of the stage arenas, each has more than one DJ present – and each DJ competes for the most number of people switching over to their channel. It’s quite something to remove your headphones and hear one half of a tent singing along to Weezer while the other scream out System Of A Down, with everyone in their own world seemingly dancing out of time.

The Croft stage, furthest out from the rest of the festival, is well worth the (albeit short) walk for the Saturday morning line up. Chilled acoustic sets, an impromptu song written by Lonely Tourist about the festival and yet more sunshine help hangovers fade ready for a brand new day.

Lonely Tourist, an acoustic act from Glasgow, deliver a high-energy set and plenty of entertaining banter. The aim of The Croft stage is to deliver more mellow music than that of The Cave and The Axiom, giving ears a more melodic treat. After the fun songs of Lonely Tourist comes the raspy Irish tones of VerseChorusVerse, also known as Tony Wright – former guitarist of And So I Watch You From Afar. His stampy, shouty, strummy style lifts the energy of the audience and draws a crowd larger than the tent can hold. 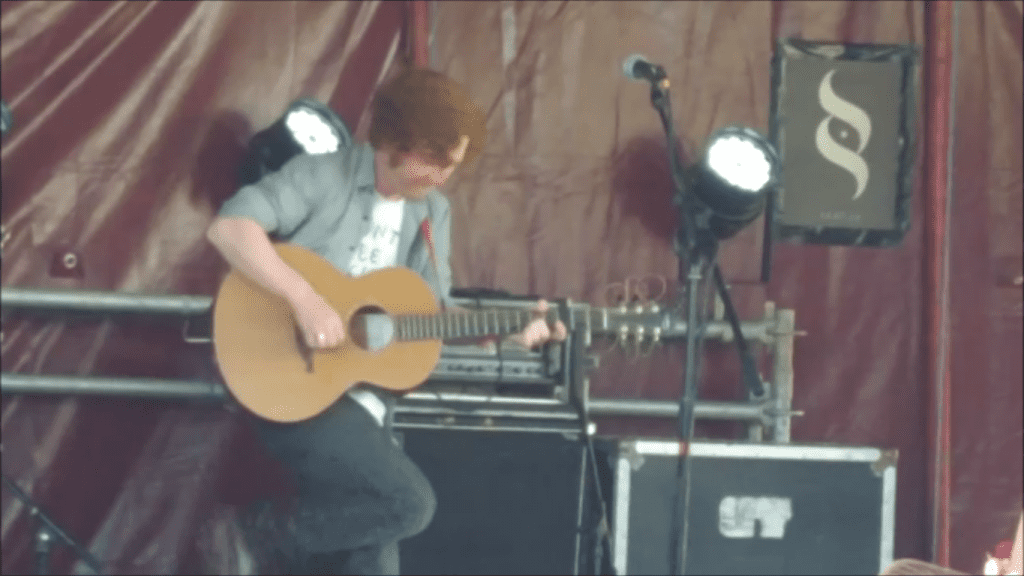 After VerseChorusVerse, Soundsphere hot-foots it to the Main Arena to hear Little Matador, a new rock band with Snow Patrol’s Nathan Connolly. A huge set, with classic rock undertones well-suited to the main stage, thick distortion in parts is balanced with heavy guitars and higher vocals than most rock bands.

After a short break for another super-secret interview, Soundsphere makes it back to the Main Arena for the impressive instrumental band, Maybeshewill. Suited to something from an epic film trailer, Maybeshewill draws a huge crowd of head-nodders and people singing along with the few lyrics that pop up now and then in their tracks. It’s very tricky to maintain the attention of a crowd with instrumental bands, but MBSW do so in magnificent style. 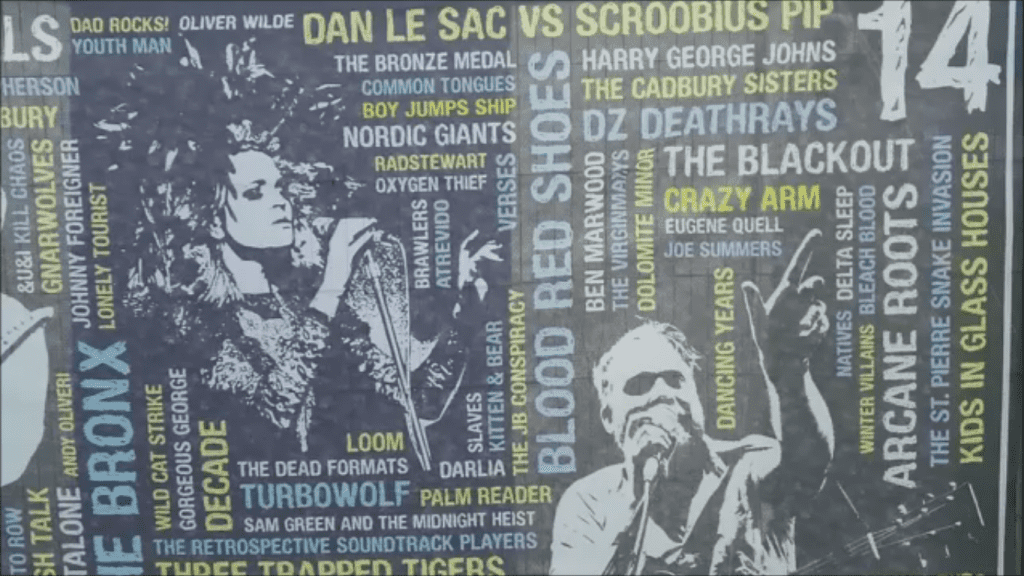 It is great to see Tall Ships genuinely chuffed to play the Main Stage, too. A grin is permanently attached to the lead vocalist’s face, growing wider and wider as the crowd sings back loud and emotionally to ‘Ode To Ancestors’. Their disbelief at playing such an enthusiastic and large crowd is not necessary compared to the immensity of the perfect set they delivered.

Public Service Broadcasting then take over the Main Stage, delivering a funny audio-visual treat. Their unusual style of sampling with live instruments is complimented by every word being communicated via a computer instead of shouted into a microphone. Their humour engages the audience so that even those not entirely sure what they are seeing or hearing eventually get into the swing of it.

A full weekend of musical gluttony, 2000Trees does not disappoint. The mix of new, underground independent artists alongside more well-known acts meant everyone came across something new as well as see their favourites. A smoothly-run, friendly event, Soundsphere’s iPod is now at full capacity with new music and rediscovered old favourites. Excellent.