You know this is a special gig when Manchester Cathedral is announced as the venue. Not to mention the fact that 65daysofstatic would be playing ‘The Fall Of Math’ album in full. 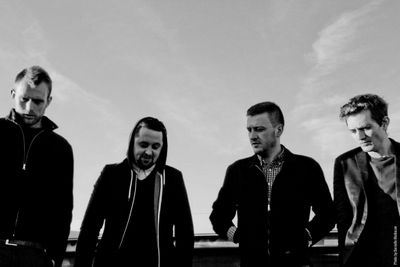 65daysofstatic have done unusual sets before, like their ‘Sleepwalk City’ art installation at Tramlines festival in 2013. Celebrating the tenth anniversary of ‘The Fall Of Math’ in a cathedral setting takes their creativity for gig aesthetics up another notch, especially with the promise of a full album play through and a second set.

‘Another Code Against The Gone’ is as great a set opener as it is an album opener. Tracks like ‘Hole’, ‘Retreat! Retreat!’ and others create those kind of moments where you need to close your eyes and absorb the music. Between songs, Joe Shrewsbury – who seems somewhat like the band’s leader – offers insight on how the band and the music industry had changed over the last ten years.

The second set allows for a contrast in 65daysofstatic’s progress over the decade with just songs from their newest album, ‘Wild Light’. Again, album opener ‘Heat Death Infinity Splinter’ is a fantastic song to start off the set with and the likes of ‘Sleepwalk City’ and ‘Taipei’ are nothing short of epic.

Audience favourites ‘Debutante’ and ‘Radio Protector’ make up the encore and the majestic setting gives the latter a new dimension.

While cathedrals are naturally beautiful buildings, most bands would likely be out of their depth if put in such a place. For some, it would be down right wrong. Yet 65daysofstatic have that right kind of atmosphere in their music and the know how to make such venues their own.

But after completely owning a cathedral, where does a rock band go from there? No doubt you can trust 65daysofstatic will have something up their sleeve, particularly considering one of Joe’s last lines of the night: “Fuck the last ten years, here’s to the next ten years.”