Damn Friday traffic saw me hurtling up to the box office for a drive-by ticket pick up. Approaching the concourse I ran into a weird wall of sound. Is that a didgeridoo or a strange auditory hallucination? It seems American Alter Bridge scoured the globe for precious metal support acts. Like a Storm hail from New Zealand, Gojira from France and the indomitable Danes – Volbeat – fanned the flames for the headliners. 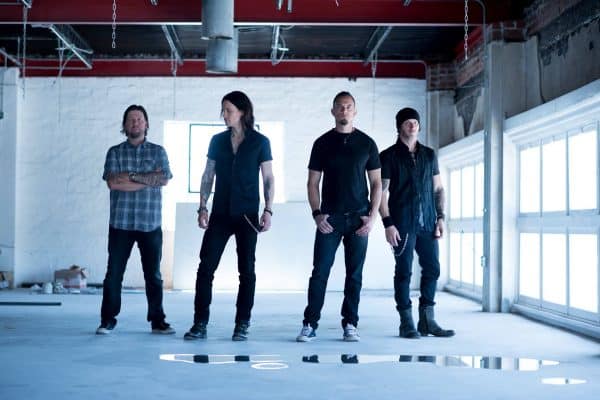 Like a Storm’s soft satanic metal is skewered with intergalactic electronica and laments of teen angst. Didgeridoo solos anchor this curious band in the antipodes, though samples of slide lap guitar illicit visions of Wild-West front-porch hillbilly blues. ‘Wish You Hell’ stands out, well defined, in the set list, didgeridoo solo weaving naturally through frenetic pedalling, building to a wave that breaks over the crowd. More of this locally crafted teen metal, stamped with their indigenous style will set these guys apart on the world’s stage. Armed with a seemingly inexhaustible supply of drumsticks, Mario Duplantier of Gojira thrashes out some impressive drumming over plainsong, through euphoric melodies and down the occasional vortex of chaos. Lucky fans catch the innumerable drumsticks being hurled like arrows into the crowd, before he sets about lashing at the kit, as in the throes of medieval battle. This formidable foursome whip up a Gallic storm with sonorous grindcore vocals and relentless drum fills; monstrously entertaining. For naïve fans, expecting the support acts to hark from the same safe space as arena-ready Alter Bridge, Gojira may have proven an assault to the eardrums. I’m sure many newly converted fans will be back for more on their upcoming 2017 UK tour.

The atmosphere, thick with fragrant vape steam and volatilised beer, is pierced by a solitary solo…Greensleeves on electric guitar. This fanfare heralds Micheal Poulsen’s ascent to the stage flanked by his ‘outlaw gentlemen’ Jon Larsen ready to beat up the kit, Rob Carravagio (of Anthrax fame) and fresh-faced Kaspar Boye Larsen taking the bassist baton from Anders Kjolholm. Poulsen roars into action, his commanding stage presence and resonant voice driving the performance. Volbeat are unashamed of their rock n’ roll roots, greasing the metal genre with handfuls of pomade, sleaves inked with pin-up tattoos. They achieve the impossible –Buddy Holly harmonies echoed in Elvis vocals blitzed with metal and hard rock. The circle pit descends into a maelstrom as ‘Lola Montez’ takes the crowd by storm. The simplicity of this melody set against glamorous vaudeville lyrics shines a spotlight on ‘Lola Montez’. We chant along, enraptured at the saloon stage. Staples such as ‘16 dollars’, ‘Sad Man’s Tongue’ and ‘Still Counting’ assuage Volbeat’s hardcore fans, celebrating their darker material; their soundtrack to barroom brawls. ‘Evelyn’ is a new addition to this subset – lovingly screamed at us by guest vocalist, Barney Greenway, of Napalm Death. Intermittently deep, dark and guttural, ‘Evelyn’ swoops into a melodic chorus– bizarre but captivating. Volbeat’s invite to party on stage is met with a tsunami surge of crowd surfers. Most are manhandled back into the crowd–a lucky few making the ultimate ascent. Poulsen is a magnanimous performer, shamelessly sharing his philosophical pearls of wisdom. However, he arguably overshares being able to ‘smell’ the ladies in the audience. Slightly creepy. But we forgive him for being so awesome.

After a thunderous setlist, Volbeat take a bow. Enter Alter Bridge. Amongst a largely unremarkable set there are moments of genius. ‘The Last Hero’, title track of the new album, is exceptional – tumultuous and energetic. Perhaps it’s just a note here or a chord there but most of their songs fail to evoke a visceral response. In patchwork we hear mythological lyrics set to metal, country and emo –it lacks a unifying sound. Myles’ Kennedy’s vocals straddle a hinterland between glam and country rock –one minute Chad Kroeger the next Bon Scott. However, devout fans are lost in ecstasy as their rich sound floods the arena. Most Notably ‘Cry of Achilles’ and ‘Waters Rising’ stir up a cacophony. As we retreat, ears ringing and bruised from the carnage of the pit, fans new and old plot future gigs. In their own way each of the four acts evokes a foot-stomped fist-pumping groundswell that leaves us hungry for more.