We were looking forward to a packed-out crowd at the Corp for this industrial powerhouse of an event in the steel city. What we got was slightly different but we were more than impressed by the diversity showcased by the bands here tonight. Manchester’s own The Ladder set the cogs in motion. 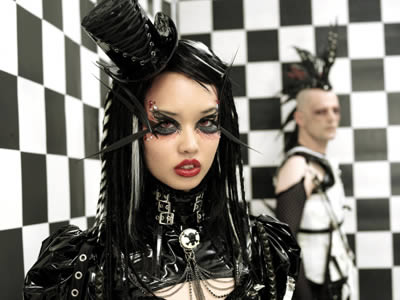 As the three-piece work hard to plow through an intense set the crowd are slow to warm up, though that might have something to do with the cramped space (we’re in the smaller room) so nobody can get their glow-things out and start moving – it’s all a little uncomfortable, and very sweaty. Despite the fact that The Ladder seem to bring their best musically, they need to work harder to interact with the crowd. It’s clear that as a unit the band need more confidence when performing which is surprising given their recent slew of high-profile support slots. The band’s formula of VNV Nation-meets-Psyclon Nine bleeps, beats and cyber-tinged sonic aggression would thrive and sound huge with more crowd participation.

Meanwhile, CeDigest do well with their hard-hitting electro-metal onslaught. It goes without saying that this act is one of the north’s most successful bands within the industrial bracket and tonight, after a long absence from the live circuit they return on what we can assume is a high. Despite the fact that SPHERE has covered CDG on numerous occasions, this scribe has never seen them before – very impressed. The band’s sound comes across like a clash between Ministry, KMFDM and Aesthetic Perfection. There’s drive, energy and direction in this and it’s great to hear and see. The only thing we could pick on about CeDigest here tonight is that they should be on a different bill. In our view, the group would be better suited to supporting heavier acts like Combichrist or Skinny Puppy. Here’s hoping we see them on another big bill soon.

Angelspit are a truly innovative band on record. They mix pure industrial, elements of rock and a raw punk attitude – they have a lot of well-deserved hype around their albums and we were hoping that they would be worth it here live tonight – this, unfortunately isn’t the case. The bass is overly loud which distorts some of the first tracks and the lighting is too dark for us to see the cult two-piece throughout. The band come out and play with a backing track and no equipment – while die-hard fans let this slide and take in new material like the defiant ‘F**k The Revolution‘ eagerly, this scribe can’t help but feel somewhat cheated as previously we’ve seen that the modern cyberpunk pioneers use at least keys and synths. While Angelspit certainly live up to their reputation for energy and a strong stage presence for standout tracks like ‘100%‘ and ‘Skinny Little Bit**‘, it doesn’t really feel like a gig with both members working as dual vocalists along with the backing. Of course, the band are all about DIY ethics and working with what they’ve got at any given time and we certainly respect that, but for an act who are so solid on disk, we expected a bit more from them live.