Teetering on the end of the summer festival season and nestled in the Bradford district town of Bingley, is a small festival which is quickly becoming one of the most musically diverse events in the North of England. Bingley Music Live is in its seventh year, and Soundsphere Magazine was there to soak up the last days of summer  to a soundtrack of The Human League, Primal Scream and Chic to name a few… 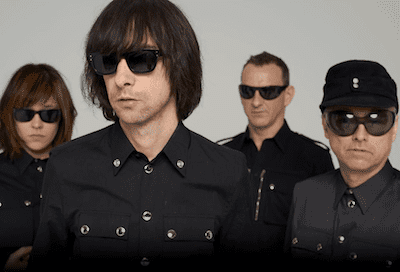 Bingley Music Live (or BML as it will be known in this review) is small. Occupying the same field as it has in years gone by, the festival is uniquely unspoilt by the ever increasing need to commercialise and expand. Indeed, the weekend begins one week after Leeds Festival, it’s larger, more bolshie (and this year, certainly more muddy) older sister. BML remains on the same field in Myrtle Park and has just enough fast food vans and amenities without feeling like you are bombarded with everything other than what you have paid £55 for…the music.

Friday is usually the quietest of the three days, but it seems the headline act for tonight, The Human League has drawn an impressive crowd. The festival kicks off with Sunderland’s indie kids Frankie & The Heartstrings. Being the opening gambit at any festival is a tricky job, but Frankie and co do an admirable stint on the Main Stage, playing radio-friendly indie tunes from their latest album.

Next onto the stage, is acoustic youngster Nina Nesbitt. Only 19, Nina commands the festival well, introducing the crowd to her own brand of Ed Sheeran-style guitar pop, a perfect soundtrack for the emerging good weather of the Friday afternoon. Her cover of Fleetwood Mac’s ‘Don’t Stop’ (used for the latest John Lewis campaign ad) was welcomed by the bustling crowd, eager to get the festivities underway.

The Dirty Rivers from Liverpool are an added surprise, upgraded to the Main Stage from the smaller second stage at the last minute; they certainly seem at home on the larger arena with bags of swagger and crunching guitar tracks ala Kasabian.  Rockabilly band Kat Men follow, the other project of Darrel Higham, the guitarist from the Imelda May Band and ex-Stray Cats Slim Jim Phantom. Together with their follow-ups The Neville Staple Band (Mr Staple, formerly of The Specials), these two bands court the crowd with rock and roll and legendary ska punk tunes, perfect for the first night of the festival.

Onto the main event then, The Human League. As music fans may know, The Human League have never really gone away. After shooting to stardom in the Eighties, the Sheffield band led by Phil Oakey have continued to make music together and tour the world, reminding festival goers and electronic fans alike of their innovation in sound. Tonight, their set comes complete with a spectacular light and picture show, providing a backdrop to such classics as ‘The Sound of the Crowd’, ‘(Keep Feeling) Fascination’ and their opener ‘Mirror Man’. Standout tracks are ‘Love Action (I Believe In Love)’ and their industrial stomper ‘The Lebanon’, finishing the set with perhaps their best loved song ‘Don’t You Want Me?’- an unsurprising hit with the crowd throughout the park, BML 2013 has truly arrived.

A sunny Saturday sees Bingley Music Live settle firmly into its festival wellington boots with a longer, more expansive set than the night before. An ever larger crowd has descended on this West Yorkshire parkland, ready for another day and night of music revelry. Certainly with Primal Scream headlining tonight, there is an audible sense that all the acts today will have to step up their game in the presence of rock and roll stalwarts.

New band The Temperance Movement launch proceedings with a solid set on bluesy rock tracks from their upcoming debut album after a 2013 of relentless touring. Definitely a band to look out for if you like your guitars charmingly sleazy. Loveable Rogues were less endearing, but seemed to attract and court the young Saturday afternoon crowd, tousling into position for the youthful addition to the set, Tinchy Stryder.

Macclesfield’s finest, The Virginmarys add a much needed hard rock edge to BML Saturday, with a blistering set which seems to shake very trees which surrounds the intimate festival- yes, it was that loud! Relaying tracks from their new album, crowd-pleaser ‘Out of Mind’ whips the dedicated rock fans into a moshing frenzy which does not relent until their break-neck set comes to an all too soon end.

Wilko Johnson is safe to say, a punk guitar icon. BML is reported to be Johnson’s last ever performance after being diagnosed with terminal cancer last year. The former Dr Feelgood guitarist shows no sign of weariness however, and plays with the relentless vigour of a man who has resolved to have the best time ever playing the best songs of his career, including a touching cover of ‘Bye Bye Johnny’…a reverent but intensely appreciative reception help steer his brilliant set to close, sure to be a “I was there” moment for those lucky enough to witness it.

Tinchy Stryder switches it up next, reminding us all just how diversely changeable this festival is at its best. Hits like ‘Number 1’ and ‘Never Leave You’ transform this early evening family festival into a rave, with Mr Stryder imploring the excitable crowd to jump up and down to the beats in his repertoire. Screams from the crowd are all the reassurance needed to realise this is a very popular guy with a charm and swagger to make the girls swoon and the guys nod their heads to the bassline.

It’s a welcome return to Jon Fratelli who made an appearance at BML 2012, but this year he returns with the band which made his name, The Fratellis. After an slightly underwhelming second album and subsequent split, it’s fantastic to see this band apparently back on form, playing some new tracks which sound more measured and yet with just as much bravado as ever. Signature tunes ‘Chelsea Dagger’, ‘Henrietta’ and ‘Baby Fratelli’ cater to the crowd eager for hits, but the real delight is watching this Glasgow band giving it another go…and Mince Fratelli is just as mental on the drums!

15,000 strong have gathered here to catch tonight’s headline act. Primal Scream have been going strong for over thirty years, and tonight’s set is representative of their amazing career. It’s a real bag that BML have managed to get this iconic band to play this unpretentious festival, a far cry from their earlier festival season appearance supporting The Rolling Stones at Glastonbury. However from the fervour with which frontman Bobby Gillespie jangled his tambourine and swivelled his languid frame across the stage, it is clear that this is a celebratory set, with ‘Movin’ On Up’ and the ever trippy ‘Loaded’, being greeted with warm recognition from the crowd. New single ‘2013’ emphasises this band’s continued relevance on the music scene, whilst chart hits ‘Country Girl’ and ‘Rocks Off’ are a sure-fire success with this massive throng of festival lovers.

It’s the final day in Bingley, and in such a short space of time we’ve become very fond of this accessible festival. Only the prospect of Chic featuring Nile Rodgers is keeping the realisation that the Soundsphere festival season is nearly at an end at bay.

Two bands of note today include Leeds’ China Rats and the affable Theme Park. The sun is hiding cautiously on this climatic day and both acts impress as once again festival goers begin to mill around- ready to embark on a third day of questionably priced alcohol and another electric showdown of live music. China Rats are enviably young rascals with guitars with impossibly catchy sounds with standout ‘N.O.M.O.N.E.Y.’ being an obvious choice for their next single. Impressed murmurings could be heard regarding Theme Park, a joyously euphoric band in the vein of the happier side of Bombay Bicycle Club and the catchier strands of Vampire Weekend. This trio know their indie disco and the crowd laps it up!

Legendary band The Wonder Stuff have reformed to much praise bringing their festival tour to Bingley with a nostalgic set to rekindle the alternative nineties fan in everyone. It is certainly a greatest hits mash-up, reminding us why this band was so loved in the first place. And from the reaction from the die-hards, it’s clear to see, they still are. Welcome back Miles, Erica & co. Katy B is another returning artist to BML, and gives the crowd a thorough work-out with hits such as ‘Katy On A Mission’ and ‘Broken Record’. Having achieved both critical acclaim and commercial success at such a young age, Katy B is loud and admiringly confident on stage. Though the dubstep is a bit of a shock to the system on this restful Sunday afternoon, it is a diverse counterpoint to the following act.

You can pretty much be certain that with The Cribs, you are always going to get a brilliant gig, no matter the venue. This Wakefield rabble got a good rep from us last year at Leeds Festival, and today, they seem to show no sign of being tamed. The set reflects their staggering ability to remain at the forefront of British indie rock for the last ten years, an accomplishment which has defeated many blossoming band along the way. As anarchic as The Libertines and as blood-thirsty as the early Manic Street Preachers, The Cribs have divided some, but bowl cuts aside, these siblings play a magnificently relentless set, with ‘Men’s Needs’ launching the crowd to boldly sing along. And of course, and an obligatory rallying chant of ‘Yorkshire!’ was sure to occur at some point during the three-day festival…

As the clock strikes 7pm, there isn’t much time to gather your thoughts and comprehend the scale of the next (and final) act’s achievements. All you discern is that you can guarantee to know most, if not all of this entire set without even realising it. The tangible excitement and anticipation for this band is almost choking as party-ready people inch ever slowly forward, down whatever paper cup they hold and gird themselves for a whole lotta disco. Gingerly, a few white-suited band members emerge on stage, and the entire festival cheers them on…and it’s not until a suave-looking guitarist with long dreads and a whiter than white cap wanders on that the screams begin to deafen. It’s the sound of 15,000 musical memories flooding back.

First of all, Chic is tight. The musicianship is staggering and the vocalists crystal clear and brilliantly talented. Every song is a delightful surprise, eliciting a communal feeling of “Man, I cannot believe he wrote this song too!” throughout the crowd. It is truly the biggest, feel-good party of the weekend with never-ending disco hits such as, ‘Good Times’ ‘I’m Coming Up’, ‘Freak Out’, ‘Dance, Dance, Dance’, ‘We Are Family’, ‘Lost in Music’ ‘Let’s Dance’ (yep, Bowie) and the insanely sophisticated ‘Soup For One’ which was later sampled by Modjo to make their dance hit, ‘Lady (Hear Me Tonight)’ a song Chic even sing in part to a rapturous crowd.  Every song is met like a gift by the crowd, causing sing-alongs, crazy dancing everywhere (yes, even some of the crowd alighted the stage) and such a long cheering applause at the end of the set, Nile and the band had to be escorted of stage to abide curfew (cue boos for the meany curfew!). Might just be one of the best headlining acts Bingley Music Live has ever had…good times.